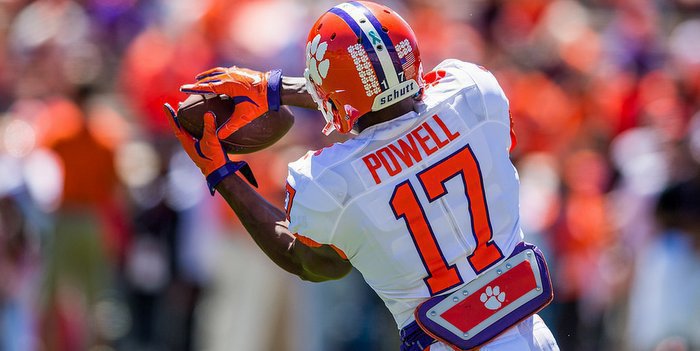 Powell makes the grab in the spring game

CLEMSON – Cornell Powell didn’t play as much as he would have liked last season, but instead of pouting and worrying about his snaps, he watched and he listened and he learned. Now he’s ready to put those lessons to the test.

Powell caught 11 passes for 75 yards in the season’s first six games, a decent workload for a freshman trying to learn his way. After the Boston College game in early October, however, he caught just one more pass, an 11-yarder against overmatched South Carolina in late November.

Never one to shy away from hard work, Powell told himself he had to work even harder to gain the trust of the coaches.

“We definitely have the best receiving group in the nation, so even when you're talented you have to put that much more work in and prove yourself,” Powell told TigerNet recently. “Guys at other programs, they think it's easier over here. It's just as hard or probably harder because we have so many top tier guys from around the country. Every day we come in here and we compete against each other and we make each other better.”

What were the main lessons he learned?

“I learned game speed and tempo and that technique is what really helps you at this level,” Powell said. “Everybody up here is talented so you have to have the proper technique to outwork that other guy because even if you beat them with speed they can recover fast on this level. So if you work your technique right you will be fine.”

The dynamic within Clemson’s receiving group has changed – gone are leaders like Mike Williams and Artavis Scott – and Powell says instead of one player stepping up and leading, they all have to take on part of the responsibility.

Powell makes the grab in the spring game "

“I think everybody in our room is stepping up. We understand there is no more Mike (Williams) and there is no more Artavis (Scott),” he said. “We know we have to come together and contribute equally, and when our number is called, whether it's Jack Swinney or Deon Cain there shouldn't be a drop-off with any of our guys.”

Powell spent the spring learning the “2-man” receiver spot in the Clemson offense, the same spot occupied by Scott. This year, Powell will share the duties with Ray-Ray McCloud.

“I think I bring strength and physicality and he brings speed and quickness. Together we can do some damage,” Powell said. “We had a limited role last year and we know we are better than that. We are ready to prove to the coaches that we can be some of the top guys in the country.”

Powell thinks he is ready for his chance, whenever and wherever that may be.

“I am ready for my opportunity whenever it is. But Coach (Dabo) Swinney knows what is best and who can help us where, so I am just trusting him,” Powell said. “Whatever he tells me I just go out there and do my best with it. I am just blessed to be here and to have this opportunity. I am ready to make those guys proud. I am going to be taking over the reins sooner or later and I am ready to step up.”