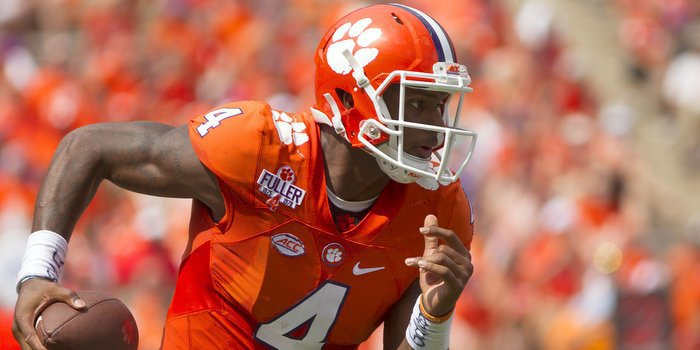 CLEMSON -- This past weekend I spoke with my uncle about the state of the undefeated Clemson football program. Like any die-hard Clemson fan, all his friends have blood that runs orange too, and he shared with me their concerns. He wanted to know if the statistics backed up what he saw with his eyes: Has Deshaun Watson declined from last year?

I quickly persuaded him by explaining that while Watson may not be off to the hottest of starts, the magical ride of 2015 may not start all that differently. Watson’s rushing numbers are almost identical. The latter half of the 2015 season is when he began to take a larger role in the ground game. Saving his legs will ultimately allow him to peak later and avoid any unwarranted injury. While his completion percentage is down relative to last season, his touchdown-to-interception ratio has climbed, likely due to the robust group of receivers flanking him.

The numbers from 2016 are not super sexy, but they have been good enough to defeat each opponent on the schedule thus far. As a Heisman candidate, and top of many draft boards, Watson came into the season with otherworldly expectations. Franchise NFL quarterbacks, from Andrew Luck to Aaron Rodgers, maintained a high completion percentage, not just on first and second down, but particularly on the critical third down throws. NFL scouts, when analyzing a QB, look heavily to see if there is that drop off in a draftee’s completion percentage on third down. While Clemson has been one of the most efficient third-down teams in the country the past two years (#13 in 2015 and #28 in 2016), Watson’s third down efficiency is not at the caliber of the NFL’s elite.

Through six games in 2016, Watson is 69% on first down, 58% on second, and just 50% on third down. There is a steady drop as he reaches crucial third down plays, but he also has had a similar drop off from his 2015 numbers. In 2015, Watson also failed to maintain his high completion percentage when defenses tightened up, and he attempted to get the ball past the sticks. 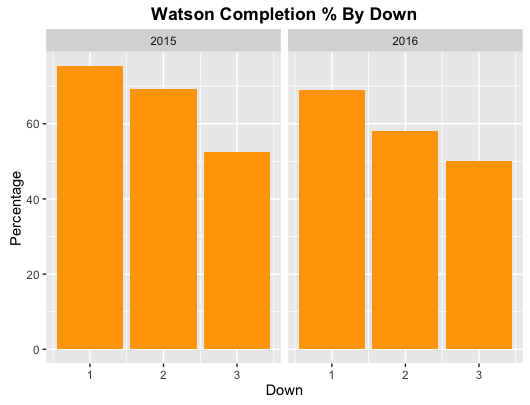 Not having any understanding of the team success Clemson has had, one might be concerned by these numbers. However, my uncle and all like-minded Clemson fans can take a sigh of relief for several reasons. When you factor out the first two games, against Auburn and Troy, in which the Clemson offense was a little tight and inconsistent, Watson improves to 56% on third down -- still a drop from first and second down, but less steep of one. Secondly, Watson has only thrown 54 third down passes so far. After more games, it will be easier to evaluate exactly where he stands.

Lastly, while the numbers never lie, we have to understand context and causation. Deshaun Watson’s greatest strength may not be his accuracy but his game management. He has proven when he has to put together a successful drive, think late fourth quarter against Louisville; he can rally the troops to get the job done. Yes, #4 has some places he can improve, but his performance is set to peak at the right time -- and that time is early January.