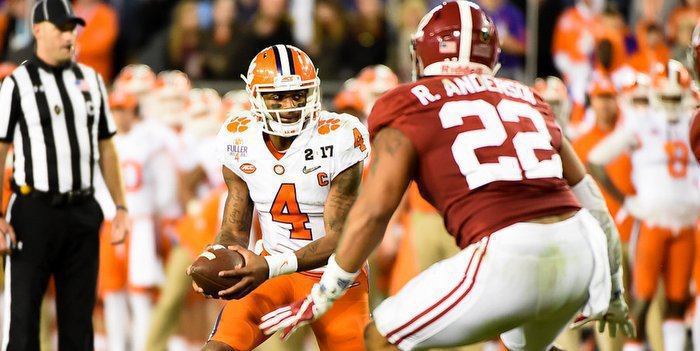 The news broke over the weekend that Clemson’s decorated quarterback was bullied out of a bar in Alabama, and one of my friends texted me saying, “Can you believe that?”

Unfortunately, yes I can.

In case you missed it or were so enthralled with women’s basketball and failed to take note of the world around you, video circulated on social media of the former Clemson quarterback being asked to leave a bar in Tuscaloosa, Alabama, on Friday,

The incident, caught on cellphone video and distributed on social media, showed Watson leaving the Innisfree Irish Pub after a conversation with other patrons.

Watson, who led Clemson to a 35-31 victory over Alabama in the College Football Playoff National Championship game in January, has not commented publicly on the incident.

Watson was visiting someone in the area – he didn’t drive down there just to torment Alabama fans like he has Crimson Tide defenses the past two season – and should be allowed to go out for a quick bite without fear of being harassed.

What makes the situation even more befuddling is that it appears the aggressor was former Tide linebacker Ryan Anderson, who took exception to Watson being in that particular place at that particular time.

The last we heard of Anderson, he refused to speak to reporters following Clemson’s win in January. He later admitted that he couldn’t walk for a few days after the game.

"I couldn't walk the next day, man," he said. "No, I really couldn't. My legs were hurting. It took like three or four days to get my legs back. I was limping around a little bit. So, it definitely took a toll on me."

Anderson played 88 snaps against the Tigers, collecting seven tackles, one sack, and two fumbles. He played extremely well but was obviously still so hurt by the loss that he decided to act like an imbecile. Of course, we have to hope that Hunter Renfrow never shows up on Anderson’s street or in his neighborhood – Anderson scooped up a third-quarter fumble and appeared headed for the end zone when he was tackled by Renfrow. The Tide kicked a field goal, and the lost four points from the lack of a touchdown were the four points Bama needed at the end.

And trust me when I say this – Anderson’s childish and boorish behavior shouldn’t be a reflection on head coach Nick Saban or all Alabama fans. Saban is a competitor and can come across as a bit prickly, but he stayed around on the field for a long time while Clemson celebrated just so he could congratulate Dabo Swinney.

No, Anderson’s actions are entirely his own, but he still represents the university and in many ways the football program which gave him the chance to showcase his talents. But, as Swinney says, you win with class and you lose with class. Saban lost with class. Anderson acted like a two-year-old who has had his pacifier taken away.

It would be my hope that if Jalen Hurts or some other Alabama player walked into the Esso Club next week, fans would ask to pose for pictures and treat him with respect. For those that have said Watson should have known better, or not been in that part of the world (like Skip Bayless), you're wrong.

It's college football and yes, emotions run high. I've seen the worst fans that college football has to offer, but we sometimes forget it's just a game. Watson didn't travel across an international border or encroach on some gang leader's territory. He was in a college town just a few hours from his own home.

Back to Watson, however. I grew up with two older brothers and learned from an early age that I had to fight for what I want. And if I had been in that situation, I probably act like a knucklehead and run my mouth right back at Anderson and escalate the confrontation. And, along the way, bring a lot of embarrassment to my family and bosses.

But Watson has also been preternaturally mature. He knows the NFL is watching and will be cataloging each and every one of his movements until draft night. He took the proverbial high road and proved that he’s not only calm under pressure on the football field, but he can also handle adversity in life as well. We all already knew that.

Anderson decided he needed to protect his turf, and you can bet NFL executives will take notice. The Tide tried to knock Watson out in Tampa, and they failed, and they lost. Anderson tried to exert some kind of wacky power over Watson in a ridiculous confrontation in a bar and lost again as Watson proved to be, yet again, the better man.