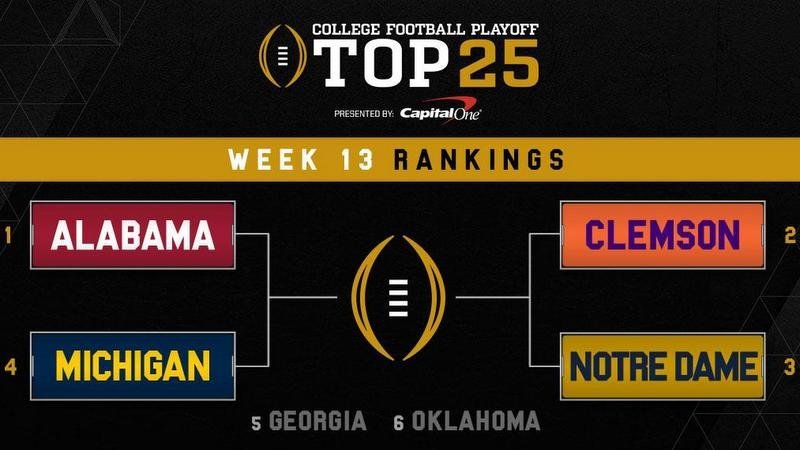 Clemon stays at No. 2 in this week's rankings

The fourth installment of the College Football Playoff rankings was released Tuesday night, and while Clemson was ranked in the second spot, committee chair Rob Mullens said there was a discussion of flipping No. 1 Alabama and No. 2 Clemson.

The College Football Playoff matches the No. 1 seed vs. No. 4, and No. 2 vs. No. 3 in semifinal games that rotate annually among six bowl games – the Goodyear Cotton Bowl, PlayStation Fiesta Bowl, Chick-fil-A Peach Bowl, Capital One Orange Bowl, Allstate Sugar Bowl and Rose Bowl Game presented by Northwestern Mutual. This season’s Playoff Semifinals will take place Saturday, December 29, 2018, at the Goodyear Cotton Bowl Classic and Capital One Orange Bowl. The College Football Playoff National Championship will be Monday, January 7, 2019, at Levi’s Stadium in Santa Clara, California.

Alabama remains firmly in the No. 1 spot with Clemson checking in just below it, which is unsurprising considering both teams once again won in dominant fashion this past Saturday. Just as it has for the last few weeks, Notre Dame remains in the No. 3 spot with Michigan just behind it at No. 4. In fact, the top eight teams in last week's CFP Rankings all won with West Virginia and Syracuse the only top 15 teams to suffer losses. As such, there was not a ton of shakeup in the top half of this week's rankings.

However, there was discussion that Clemson – 35-6 winners over Duke – could take the spot after Alabama beat The Citadel 50-17 but was tied with the Bulldogs 10-10 at the half.

“Week 4 is complete, and here are our rankings: Alabama is No. 1; Clemson is No. 2; Notre Dame is No. 3; Michigan is No. 4,” Mullens said. “Obviously, nothing changed since last week. But that doesn't mean we didn't discuss or consider changes. We did. We talked about whether Alabama and Clemson should flip. Obviously we decided not to. We talked a long time about Notre Dame, Michigan and Georgia and where they should be ranked, especially after looking at their full resumes, including the one head-to-head, we ranked them as the way we did.

UCF after its win against a ranked Cincinnati team moved from No. 11 to No. 9. In contrast to last week when eight teams which previously were ranked between No. 11 and No. 24 lost their games, only five teams in the top 25 lost their games this week. Because of this relative stability, because so many teams won, that contributed to Syracuse and Iowa State's drop in the rankings.”

Mullens then said that the discussions about Alabama and Clemson have been the same the last few weeks.

“Similar to the discussion we've had the last few weeks. I don't think much has changed,” he said. “I think it's been pretty consistent. We see two well-balanced teams, efficient on offense, strong on defense, that perform week in and week out. So I think it's been very consistent how the committee has viewed it, but we do have a responsibility to make sure we take a deep dive each week, and we've done that.”