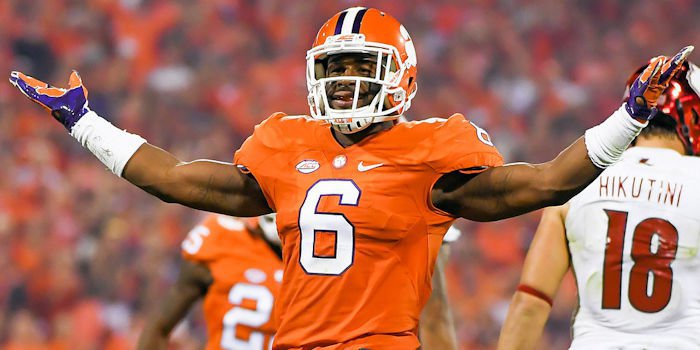 CLEMSON – Finish with no regrets.

That’s the motto for the Clemson Tigers during the 2016 season, and at 7-0, there have been no regrets, even with the way last week’s 24-17 overtime win over N.C. State played out.

What there was, however, was a confidence that no matter what needed to happen, the players on the field would get the job done and keep their playoff hopes alive.

Starting linebacker Dorian O’Daniel told the media earlier this week that while the game was frustrating, the players on the sidelines remained calm, trusting each other to finish the job.

“Yeah, amongst other games, I would completely agree because things weren't going in our favor,” O’Daniel said recently. “They got a lot of first downs and a lot more third down conversions than we've given up in a while and it was frustrating. Deep down we knew what had to be done and what we had to do. Even down to the last field goal attempt, everyone sold out on rushing the kicker, and it just turned out in our favor.

“It was more a collective calm, as ironic as that sounds. We are built for situations like that. We knew what had to be done and we knew we had a lot at stake. We weren't going to let our playoff opportunity be affected by a team that we knew we could beat. Taking pride in our assignment and trusting our keys and trusting the next guy to do his job ultimately led us to win.”

The end of regulation was anything but usual as the Wolfpack chewed up over six minutes of game time and then missed the game-winning field goal wide right, but O’Daniel said that even is Kyle Bambard had been accurate, the ball would not have made it past the line of scrimmage.

“I'm not going to lie. I was really, really nervous. I was like, ‘Wow, this is it.’ But, in the back of my head, I knew we had to sell out,” he said. “Coach Swinney iced the kicker - you only see that in video games and it works sometimes and sometimes it doesn't - but to be honest, whenever he kicked it around to the right, that was the only way he would have made it. If he would’ve kicked it right up the middle, it would have gotten blocked because the penetration we had was unbelievable. And, I think Christian Wilkins blocking the field goal earlier, definitely had a mental effect on that kicker. Everyone sold out and took pride in that field goal block team and getting pressure on the kicker really helped.”

Even with the season on the line, O’Daniel said he and the other players on special teams knew that this moment is why they prepare every day.

“We know how to finish. I think finishing allows us to be able to win. That comes from the off-season,” he said. “Since last season, Coach Swinney's message has been "Finish with No Regrets." I think the team has really bought into that - with our practices, our workouts, how we practice - everyone knows, especially with the loss to Alabama in the National Championship, we know just how critical finishing is. We play until we win or when the game is over - however long it takes to win. Everyone taking pride in that really helps us.”

Up next, is a trip to Tallahassee, a place Clemson hasn’t one since 2006, and O’Daniel said the team is treating this trip much like they did the one to Atlanta earlier this season.

“Very excited. Like in the Georgia Tech game, there was a lot of rhetoric like, 'Clemson hasn't won at Georgia Tech in 13 years,' and we went to Georgia Tech and did that,” he said. “This is just another opportunity to put an end to all of that rhetoric about us not being able to win at Florida State. I mean, they are a good team. They are a good team every year and we just have to start from scratch in studying the opponent and knowing our assignments.”

With almost two weeks until the Tigers and ‘Noles square off, O’Daniel has already started watching film of Florida State and has noticed several new wrinkles in their offense.

“They switched up their offense and did a little bit more than in previous years,” he said. “They like to stretch, a lot of things similar to NC State. Obviously, Dalvin Cook is one of the best running backs in the league. It's nothing that we haven't already seen from other teams, we know that we put some stuff on film, that they're going to like, that we need to get cleaned up. We're trying to prepare for anything they throw at us.”

If Clemson leaves the Sunshine State with a win, maybe more people will start buying into the Tigers as a team of destiny.

“You can't make situations like that up, no matter if it's Louisville, Georgia Tech, NC State,” he said. “Some people say it's luck; we say it's hard work. I definitely feel like this team is destined.”