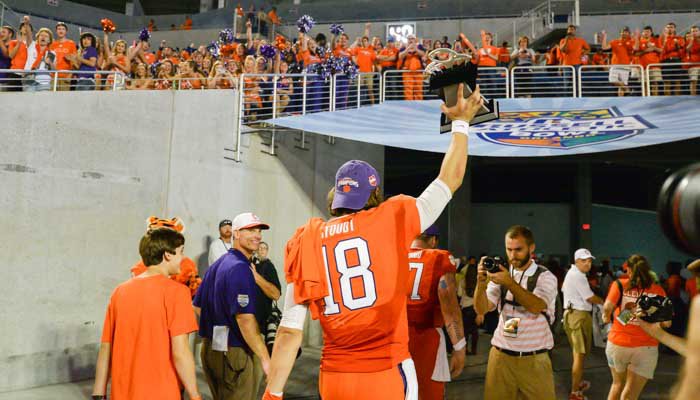 Why? Because he saved his best for last?

Stoudt turned in the best performance of his career, winning the Russell Athletic Bowl Most Valuable Player award by completing 26-of-36 passes for 319 yards and three touchdowns in the final game of his Clemson career in Clemson's 40-6 drubbing of Oklahoma.

Stoudt’s night got off to a big start on the Tigers’ first play, completing a short pass to Artavis Scott

Artavis Scott
Fr. Wide Receiver
#3 5-11, 190
Oldsmar, FL
View Full Profile that Scott turned into a 65-yard touchdown. The quick pass and the quick success set the tone for the rest of the evening.

Dabo Swinney
Head Coach
View Full Profile said that Stoudt was the story of the game.

“The story of the game offensively was Cole Stoudt. We had great preparation getting ready for this game,” Swinney said. “It didn't start out the way he wanted it to this year, but buddy it's all about how you finish. Cole Stoudt was 6-2 as a starter for us this year, and played his best game of his career in his last game. We knew our only chance to win this game was that he was going to have to play his tail off and we were going to have to make plays outside. This is a very tough defense to run against, and we did just enough.

“But Cole Stoudt was awesome. He made plays with his legs and made great decisions with the football. He made good checks and checked us into some plays. They brought a house blitz and he checks us into a touchdown to G-Hop. Cole Stoudt was awesome and nobody deserves it more than ole No. 18. He has hung in there and shown class even when things didn't go the right way and he continued to believe in himself. I couldn't be more proud.”

“I wouldn't say it was redemption. I just knew that this was my last game here and knew that I had to prepare to be my best,” Stoudt said. “I wanted to do it for the guys around me, because that's what really mattered, the people I have played with over the years. In my mind, I knew I wanted to be the best I could be for this team and go out and have some fun and just enjoy the last game with everyone and that's what we did. We had our best bowl practice that I've been around. And it was just a ton of fun. We all had a blast.”

Stoudt became just the third Clemson quarterback to throw for 300 yards in a bowl game. The others are Tajh Boyd

Chad Morris
Offensive Coordinator / QBs
View Full Profile left to go to SMU, and Swinney thought it fitting that Streeter has been in Stoudt’s ear during bowl prep. 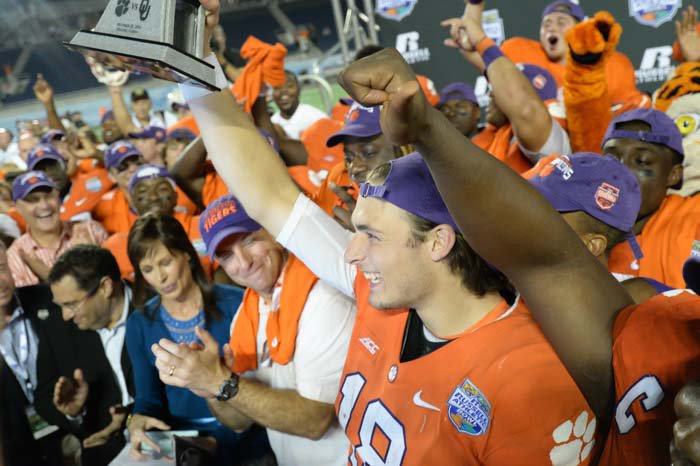 Stoudt receives MVP trophy
“There have only been three quarterbacks ever to throw for 300 yards in a Clemson bowl, and you talk sometimes about how things are destined,” Swinney said. “But one of them is Tajh Boyd, one of them is Cole Stoudt and the other is a funky old quarterback named Brandon Streeter, who we just hired to coach our quarterbacks about three weeks ago. So it's pretty ironic that he joined that group with Streeter and Tajh Boyd. That's pretty neat.”

Stoudt said that making the completion and touchdown on that first play set the tone.