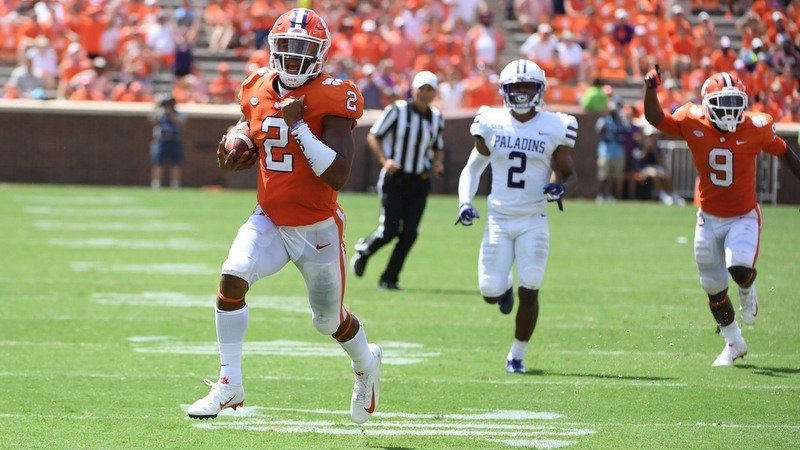 Kelly Bryant scores on a third quarter run of 25 yards

CLEMSON – Expect both Kelly Bryant and Trevor Lawrence to play next weekend.

Bryant started and played the first three series of Saturday’s 48-7 victory over Furman, leading the offense to 10 points before giving way to Lawrence on the game’s fourth drive.

Bryant threw for 127 yards and a touchdown on a 10-of-16 clip while rushing for 44 yards on five carries. Lawrence threw for 137 yards and three touchdowns while completing 9-of-15 throws and rushing for a yard on three attempts.

The Tigers play at Texas A&M next Saturday in a primetime matchup, and the Clemson coaching staff indicated that both quarterbacks will see snaps against the Aggies.

"I didn't see anything from today that said we're only going to play one quarterback next week," said co-offensive coordinator Jeff Scott.

"I didn't see anything that would say, 'This guy doesn't deserve to play.' Both had some mistakes, and both missed a couple of easy throws," Swinney said. "But I think that was just kind of the emotion and adrenaline of the first game. But they both settled in and made some big-time plays. You see what Trevor can do," Swinney said. "He's a special talent, and he's just going to get better."

Scott said both players showed both good and bad.

“It was good to have multiple guys out there playing,” Scott said. “I thought each of them had a few good plays, good moments and they had a few things they’d like to take back, which is no different than any position offensively.”

Next up for the coaches? Watch the game tape.

“As coaches, we’re going to go back and evaluate it. We’ll watch it tonight and tomorrow and spend all day talking about it and grading,” Scott said. “For me, I wasn’t watching the quarterbacks. I was watching the wideouts every play. Trevor had three touchdowns and as a true freshman in his first game, so that was good to see. I was proud of Kelly for coming back. He got off to a little bit of a slow start but he came back and made some plays, running the ball and throwing the ball. I didn’t see anything that really changes the opportunities those guys may have moving forward.”

Lawrence led scoring drives on each of his possessions, and co-offensive coordinator Tony Elliott said two scoring drives – both led by Lawrence – set the tone for the game. He then said that he was pleased with both Lawrence and Bryant.

“I thought both of them made plays. Both went on and led the team like we expected them to based off of what we saw in practice,” Elliott said. “Both missed a couple of throws but found ways to make plays. I was pleased with the performance, but obviously, we have to get on the film. They both have opportunities to improve but pleased with both of them.”

Elliott said Lawrence has plenty of room for improvement.

“Just command of the whole system (where Lawrence needs to improve). You have to handle the motions, you have to make the protection calls, make different checks that we have within the system,” Elliott said. “The biggest thing is getting comfortable to where everything is second nature for him. That takes reps in practice and reps in games. Talent-wise, there’s no question about how talented he is. It’s just we have to get him to where the game is slow. At times, certain concepts that he’s had more time with, it slows down, but there are things he’ll get better at over time.

“I think it’s a fair assessment that he’s able to make that throw (downfield across his body). He’s got a big arm. He’s got the height to be able to see it. We know he’s got the arm. He just has to continue to develop within the system and he’ll have an opportunity each week.”