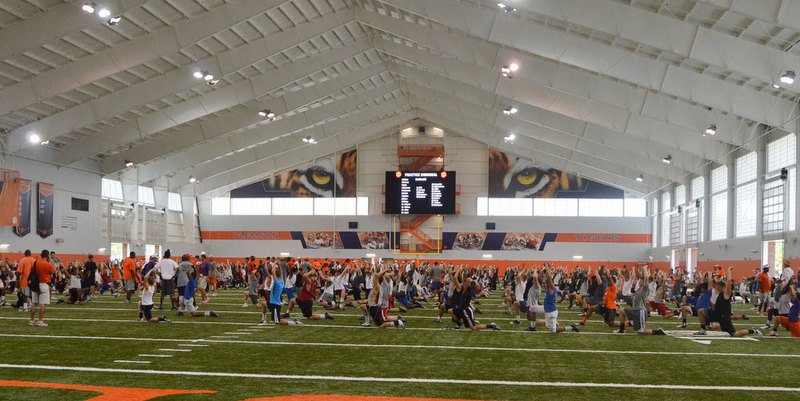 Swinney is expecting thousands of campers over the next few weeks

The days are muggy and hot, afternoon thunderstorms are rolling through the area and start of college football is less than 100 days away. That means it’s time for head coach Dabo Swinney’s high school football camps.

That will be the same schedule next week.

In year’s past, the camps have been a time when we could expect a commitment or four, but with recruits taking visits earlier and committing earlier, the camps have turned into more of an evaluation period for both parties – the coaches get to see the prospect in action and how he takes coaching while the prospect gets to see the campus, the facilities and work with the coaches.

And, unlike other schools (like Dawg Night or Friday Night Lights), Swinney’s camp isn’t a combine. The players don’t run 40’s or go through measured drills……….they simply get football instruction. That’s why recent NCAA legislation that prohibits high school coaches from working the camp is a big deal.

“For some schools, it's probably not that big a deal, but for us, it's a huge deal,” Swinney said. “Because, again, we've run a football camp. We've not done a combine. We don't do Senior Days and run 40s and jump verticals. We coach football. I think that's why our camp has grown so much. I really do.” 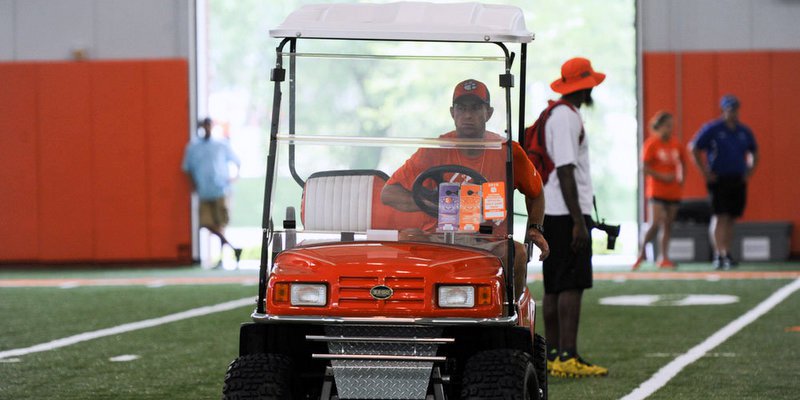 Swinney is expecting thousands of campers over the next few weeks "

However, Swinney doesn’t want to change the focus of his camp. He doesn’t want it to be a combine; he just wants it to be a place where players can come and receive top-flight instruction.

“I think guys come and they don't have the pressure on them and they can really improve in their craft,” he said. “We've had an enormous amount of coaches, so guys have gotten a lot of work. We've tried to minimize O-lines and things like that. We want guys getting a ton of reps. So we've got to find guys in the college ranks to come and work our camp and use as many of our players and all of our staff can make it work. It's going to be a new experience for us.”

Now, on to what you really want to see – recruits who will be in attendance.

*Bowling Green (KY) South Warren 2019 four-star defensive tackle Jacob Lacey will be on campus all three days. This is a chance for the Clemson coaches to make a big impression on Lacey, who has offers from most of the big names in this part of the country, including Florida St., Ohio St., Notre Dame, Tennessee, Penn St. and Michigan.

Lacey told TigerNet that his visit has been in the works since defensive coordinator Brent Venables made a visit to his school in early May.

“He (Venables) was telling me that he can’t wait to see me at one of the camps,” Lacey said. “He told me to be ready and that great things will happen at camp if I perform well, so I’m just getting ready for camp season. I can’t wait to get back over there.”

*Another camper who will be on hand for all three days is Calhoun (GA) 2019 receiver Brannon Spector (6-0, 185) . Spector is the younger brother of freshman linebacker Baylon Spector and son of former Tigers receiver Robbie Spector. His offer is from Mercer, but it will be interesting to see how he performs in camp.

*Clemson is set at quarterback for 2018 with Trevor Lawrence, so the coaches will now begin a search for a 2019 signal caller. Charlotte (NC) Christian's Garrett Shrader will compete at this week's camp in hopes of earning an offer.

*Working out with the linebackers on Tuesday is Walhalla (SC) 2019 punter Patrick Nations. He will work out with the specialists on Wednesday. Clemson has relied on walk-ons at punter since the departure of Bradley Pinion. It will be interesting to see if he does enough to garner interest.

*Rock Hill (SC) South Pointe's B.T. Potter will also workout during the first session, which is when the Kicking Academy is held.

*Clemson is still in search of defensive back help in 2018 and McDonough (GA) ECLA defensive back Tre Douglas will be on hand. Douglas released a top-10 of Clemson, Ohio State, Florida State, LSU, Virginia Tech, Stanford and Vanderbilt in April.

*Competing on Tuesday is Clayton (NC) 2019 defensive end Savion Jackson. Jackson owns offers from South Carolina, Virginia Tech, North Carolina, N.C. State, Penn State, Florida and Pittsburgh. Jackson attended one of Clemson’s spring practices in March, and new defensive line coach Todd Bates paid Jackson a visit during the spring evaluation period. He does not have a Clemson offer. Will working out in front a Bates and Venables change that?