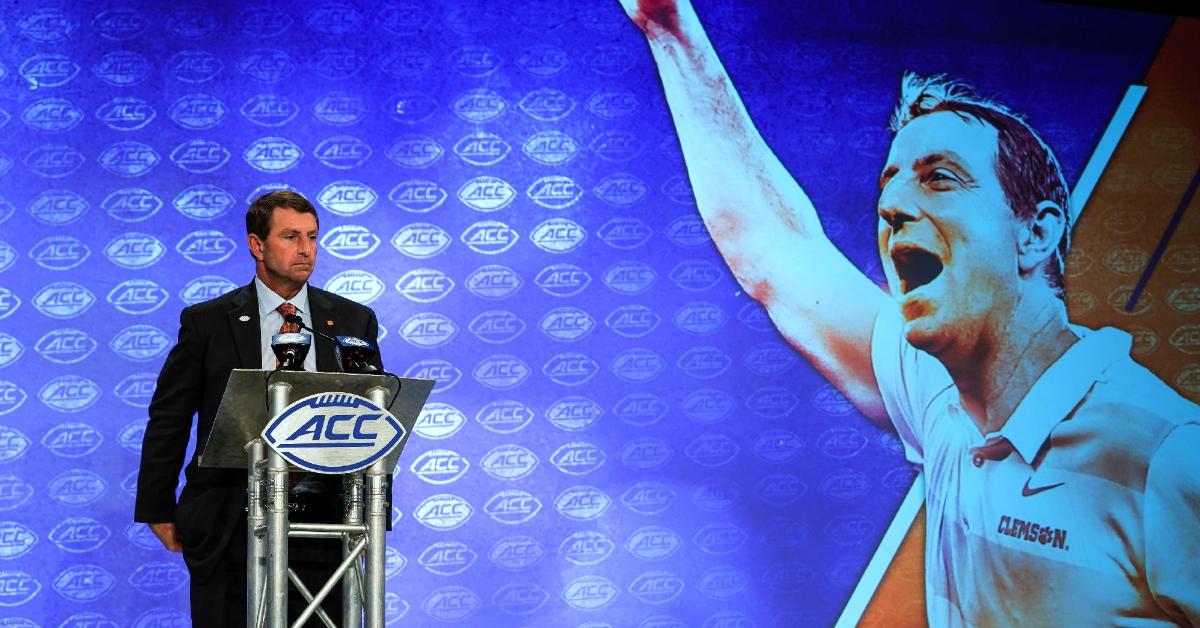 The competition that we didn’t know was a competition is over. The ballots have been counted. The scoreboard is turned off. The results are in.

Both leagues held their media days last week and the Tigers – winners of two of the last three National Championships – were the hot topic of conversation at both. It’s easy to understand why Clemson would be the main topic with ACC teams, but the SEC teams also had to answer questions about how this upstart from South Carolina could, gulp, be the favorite again this season.

Texas won the title in 2005, but an SEC team won it each of the next seven seasons. Florida St. won in 2013 and Ohio St. claimed the crown in 2014, but Alabama won in 2015 to seemingly right the ship. However, Clemson won in 2016 and many hoped that the Tigers would go the way of the Seminoles and Buckeyes and disappear into the night.

No such luck. The Tigers have made the College Football Playoff four consecutive seasons and dominated Alabama 44-16 to win the championship again last season. Entering 2019, Clemson is once again a heavy favorite to not only win the ACC but also advance to the Playoff for a fifth consecutive year.

The ACC media days kicked off with ACC Commissioner John Swofford talking about how much Clemson has meant to the success of the league.

“Well, I don't think you can even measure it. It has meant a great deal, there's no question about that,” Swofford said. “The fact that we've had, from a football perspective, a team every year of the College Football Playoff in its first few years, that says a lot. The fact that Clemson has won two of the last three national championships, the timing couldn't be better from a business standpoint and from a network standpoint.

“But any time you have a team that's doing what Clemson is doing in college football, it's good for the entire league, and certainly good for this network launch, without question.”

The ACC Network’s first televised football game will be on August 29th when Clemson hosts Georgia Tech in a Thursday night matchup.

“It's awfully nice to be able to launch a network with the first live football game having the national champion in it,” Swofford said. “I think that says it all in terms of Clemson, what they've done as well as what it then means to the league in terms of going forward with the network.”

Among the first pieces of original programming set to air on the ACC Network is titled, “Greatest Ever: The 2018 Clemson Tigers.” The 30-minute special chronicles the Tigers’ run through the College Football Playoff, culminating in a 44-16 win against Alabama.

Each ACC coach and player represented at The Westin Charlotte had to deal with the Clemson question.

NC State head coach Dave Doeren was matter-of-fact when it came to the Tigers.

“I think there’s a gap between Clemson and everybody right now,” Doeren said. “I mean, they just beat the SEC champion by however (many) in the championship game, so they’re the team to beat. They’ve earned that. Like I said, they deserve credit for that. It’s our job to try to catch ’em.”

Meanwhile, Alabama and South Carolina were forced to answer the Clemson question as well. Think about it – how much did you hear about Tennessee, Kentucky, Vanderbilt, Ole Miss, or even Arkansas? How much was Clemson in the conversation? Every day.

Nick Saban and his players had to answer questions. South Carolina head coach Will Muschamp had to answer a ridiculous question about the Gamecocks being Clemson’s little brother. Even SEC pundit and radio/TV host Paul Finebaum seems to have short-circuited when it comes to the Tigers.

One day he loves Dabo Swinney. The next day Swinney is hiding something. One day the Tigers are the premier program in the country, the next they don’t know how to win. One day Finebaum says Clemson should be favored heading into the season, the next he questions the defense.

Over in the corner, Saban is writing on a notepad, keeping a list of the reasons Alabama lost by 28 points to an ACC squad.

I asked Clemson safety Tanner Muse about this year’s team – the seniors have won two titles, so where will the drive come from? What will produce that chip?

“I think it comes -- I mean, it comes just from the success. Tasting the success, being able to continue to strive to get to the top of the mount, top of the totem pole,” Muse said. “We've suffered a few losses since I've been there. I hate losing more than anything. Just having that bitter taste in my mouth. I always think back of those times, how it felt, how bad it was. That always drives me to continue to get better, continue to bring the guys along where they don't have to feel what we felt in previous years.”

Muse couldn’t have come up with a better answer, but head coach Dabo Swinney now has all the motivation he needs. The chip is there. Everybody else has made sure of it.

The Tigers have won the media days (maybe we should say Swinney is the big winner) and won the offseason. Now let the real games begin, where it will be decided on the field.