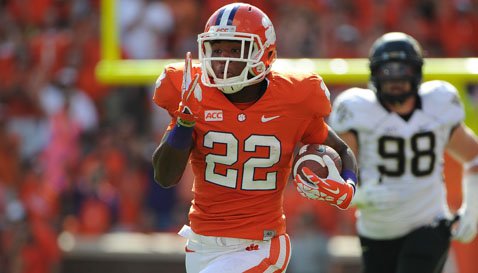 Can Clemson's offense do enough to pull away? Or will the Tigers turn to Watson if the offense stalls?

Clemson and Wake Forest will kick it off for the 79th consecutive season Thursday night in Winston-Salem, with Clemson winning 61 of the previous 78 meetings.

Thursday’s contest looks like the kind of game in which the Tigers will get win number 62. The teams appear to be heading in opposite directions – Clemson has won five games in a row while the Demon Deacons have lost four in a row.

Can Wake Forest mount enough of an offensive attack to hold off the Tigers? Will Clemson’s Dabo Swinney

Deshaun Watson
Fr. Quarterback
#4 6-3, 204
Gainesville, GA
View Full Profile if the Clemson offense stalls? Or will the Tigers ride out of Winston-Salem with an easy win?

WHAT: No. 21 Clemson at Wake Forest

*Clemson’s offense has been stagnant without Watson – The Tigers have just three touchdowns over the last three weeks without the freshman from Gainesville, and there have been times when the offense is hard to watch. Chad Morris

Chad Morris
Offensive Coordinator / QBs
View Full Profile once had a vertical passing attack and a running back that could stretch the field – these days the offense is stuck with passing plays around the line of scrimmage and a ground game that only gets in gear in the fourth quarter.

Wake Forest is in the middle of the pack in the ACC in total defense, but their pass defense is ranked second (behind Clemson) in the conference. Despite all of their struggles, Wake is still giving up just 24.6 points per game. If they can keep it close, they might have a shot.

*Special teams – It seems like every game Clemson has played this season, the opposing punter has looked like Ray Guy and boomed punts all over the field. As a result, the Tigers have had terrible field position in several games, and it doesn’t get any easier this week. Wake’s Alex Kinal is currently 28th in the nation in punting average at 43.6 yards per punt. Thanks to his efforts, Wake Forest ranks sixth nationally in net punting at 42.3 per punt. He already owns the Wake Forest record for career punts with 234 (a dubious record), but Kinal has punted 53 times this season and does not have a single touchback. Only 11 of Kinal’s 53 punts this season have been returned, and in a game that might be low-scoring he could five the Deacons an advantage. Field goal kicker Mike Weaver has hit all nine of his attempts this season, and we know the struggles that Clemson’s Ammon Lakip

*It’s a Thursday night in Winston-Salem – Believe it or not, the Deacs are 4-1 all-time in Thursday night games at BB&T Field. The lone loss? Two years ago to Clemson. Will Clemson be overlooking an overmatched opponent and be looking ahead to Georgia Tech?

Freshman quarterback John Wolford has thrown 13 interceptions but has been constantly under pressure, getting sacked a total of 28 times this season. Clemson’s defense has 30 sacks this year, so if the Deacons can’t establish a rushing attack and have to throw it, it could get ugly.

*The Tigers are getting healthy – Clemson is lucky in that many of these injuries have occurred in the softest part of the schedule. The Tigers get tight end Jordan Leggett

Jordan Leggett
So. Tight End
#16 6-5, 251
Navarre, FL
View Full Profile back this week, and he will be a weapon for Cole Stoudt

Tyshon Dye
RS Fr. Running Back
#23 5-11, 214
Elberton, GA
View Full Profile – by all accounts we’ve heard Dye has looked good in practice, and he’s the kind of physical runner that Morris has been needing to get involved in this offense. It’s just a matter of time before Clemson’s offense begins to click, and if Stoudt’s shoulder is improved and the offensive line can open some holes, it will make scoring points a lot easier.

*Simply put, Clemson is just better – This is the kind of game that the Tigers have won consistently under Swinney. Out of Tommy Bowden

Tommy Bowden
Head Coach
View Full Profile ’s 45 losses, 24 were to unranked teams. Under Swinney, the Tigers have beaten 24 unranked teams in a row. Other teams in the state would love to say the same thing. Clemson has a lot of NFL talent all over the field, and while Wake has some freshmen that have stepped up this season, they are still very, very young.

Don’t be surprised if the Tigers struggle to get acclimated early. The offense – as we mentioned – has been stuck in neutral for a while but if Stoudt is healthy the Tigers can take more shots down the field. If Stoudt struggles, Swinney probably won’t hesitate to insert Watson into the game to get a spark.

The Tigers have reshuffled the offensive line this week – Reid Webster

Artavis Scott
Fr. Wide Receiver
#3 5-11, 190
Oldsmar, FL
View Full Profile get untracked and the passing game clicks enough to score points. This one should see the Tigers comfortably ahead by midway through the third quarter.