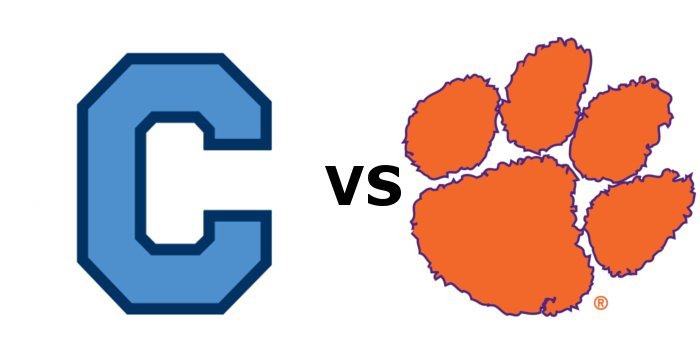 Clemson and The Citadel face off on Military Appreciation Day

Clemson football and Military Appreciation Day go hand-in-hand. Add in The Citadel as an opponent and the day sets up to be a good one.

Clemson’s military history is well known, the Tigers play in Memorial Stadium and they run down the hill a little over a hundred feet from the school’s Scroll of Honor. The Tigers will wear all purple in honor of the occasion.

The Citadel has a long and proud military tradition, so sit back and enjoy the last home game of the season.

Streak: Clemson won 16 in a row

*Clemson holds a 31-5-1 advantage in the series with The Citadel that dates to 1909. Clemson won that first meeting at Charleston by a 17-0 score. In fact, Clemson won the first six games of the series by a margin of 130-17. Four of the six wins were by shutout.

Clemson and The Citadel face off on Military Appreciation Day "

*A victory would give Clemson an 80-14 record over the last seven years. Only Alabama has a better mark over that period. With this week’s top 10 ranking in the AP poll, the Tigers have now been ranked for 48 straight polls, just two short of the school record. The streak includes 39 consecutive top 10 ranking, longest in Clemson history by far (14 is second best top 10 streak). Clemson and Alabama are tied for the longest current top 10 streak in the nation.

*The Clemson University Athletic Department will recognize and honor its fallen soldiers, veterans, and current military personnel serving in the armed forces during pregame, in-game, and halftime ceremonies. Veterans and current soldiers can participate in a parade to the stadium through the Clemson campus. The parade lineup is at 10:45 AM outside of Holmes and McCabe dormitories on Fort Hill Street. The parade will begin at 11:00 AM and will end at the IPTAY Center.

*Kelly Bryant will be looking for a Clemson quarterback record Saturday. The junior is 9-1 in his first year as a starter. The Clemson record for wins by a first-year starting quarterback is 10, set by Chris Morocco in 1989 (10-2) and Tajh Boyd in 2011 (10-4). Boyd also took the Tigers to an ACC title that year.

WHY THE CITADEL CAN WIN

This is a Bulldog program in a season of transition. They finished 10-2 last season under head coach Brent Thompson, but are 5-5 this season and will miss the playoffs. Four of the five losses have come to programs ranked in the top 25 of the FCS poll the week of the game. That includes last week’s loss to a rising Furman program.

Dominique Allen is the leading rusher and passer. He has 571 rushing yards and eight scores and has thrown for another three touchdowns. The Citadel has four players with at least 479 yards rushing. Grant Drakeford is second on the team with 556 and a remarkable 9.9 yards per carry average. On defense, The Citadel is led by Myles Pierce with 83 tackles, including 12 tackles for loss. Aron span has five interceptions to lead any player in today’s game and he has 51 total tackles.

The Bulldogs went into Wiliams-Brice two seasons ago and defeated South Carolina, so they know what it’s like to win on the road against a Power Five school. They have to control the clock, force Clemson into a bevy of mistakes, and be in the game in the third and fourth quarters. If they catch the Tigers looking ahead to next week’s game at South Carolina…....maybe……...

The Tigers are headed back to the ACC Championship Game and have next week’s game at South Carolina. Head coach Dabo Swinney was able to rest several key contributors last week and others will get a chance to rest this week. However, the reserves are pretty good, too, and they shouldn’t have a problem with the Bulldogs.

Clemson had an outstanding performance on the defensive side of the ball in the 31-14 win over Florida State. In addition to holding he Seminoles to just 14 points, the second fewest points Florida State has scored against Clemson since 2005, the Tigers limited Florida State to just 12 first downs, 21 yards rushing on 24 attempts, 13-32 passing and just 239 yards of total offense.

With that performance, Clemson enhanced its defensive rankings in a number of categories for the season. Clemson is now first in the nation in sacks per game, sixth in yards per play allowed, seventh in scoring defense and eighth in total defense. Below is a summary of top 25 national rankings.

Offensively, the Tigers continued to be balanced, and 200 yards rushing is the key. The Tigers are now 45-1 under Swinney when the Tigers rush for at least 200 yards, including 41 wins in a row.

The Bulldogs will try and milk the clock, limit Clemson’s offensive possessions and force the defense to take chances. But the Tigers faced Georgia Tech’s option attack just a few weeks back, and they won’t see anything new from The Citadel. Clemson will get out to the early lead, the defense will swarm the Bulldog rushing attack and the Tigers will play a lot of players. However, we’ve all seen that this offense tends to shut things down in the second half, so I am not sure how many points the Tigers will score.