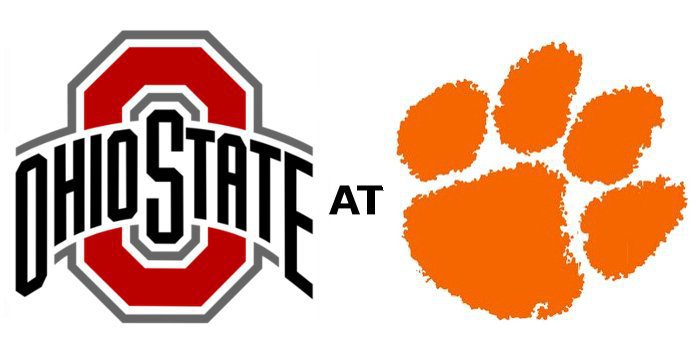 Clemson takes on Ohio St. in the Fiesta Bowl

SCOTTSDALE, AZ – All of the talking is done. All of the pregame press conferences have been held, and the teams have finished their pregame preparations.

Now, it’s time to spot the ball and figure out which team is better as the 2016 Playstation Fiesta Bowl gets underway tonight at University of Phoenix Stadium.

Clemson and Ohio State have met twice on the gridiron and Clemson has a 2-0 lead, with both victories coming in a bowl game. The Tigers won 17-15 at the 1978 Gator Bowl in Jacksonville in what was Danny Ford’s first game as Clemson coach and Woody Hayes final game as Ohio State coach. Clemson won the most recent meeting as well at the 2014 (end of 2013 season) Orange Bowl, 40-35.

Clemson has a 15-12 record in bowl games against top 25 opponents, but the Tigers are 6-3 against teams ranked seventh or higher. That includes a win over sixth ranked Ohio State in 2013. Ohio State is ranked second by AP and by USA Today entering the PlayStation Fiesta Bowl and third by the College Football Playoff. If Clemson beats Ohio State it would be the highest-ranked team according to the AP Poll Clemson has beaten in history. Three times Clemson has beaten a no. 3 team, including last year against Oklahoma in the College Football Playoff. The highest ranked team Clemson has faced in a bowl is LSU, who was number one entering the 1959 (1958 season) Sugar Bowl, a game Clemson lost by just a 7-0 score. Clemson defeated a fourth-ranked Nebraska team when it won the National Championship at the 1982 Orange Bowl. Clemson also defeated a sixth-ranked Tennessee team in the 2003 Chick-Fil-A Bowl, a seventh ranked TCU team at the 1959 Bluebonnet Bowl and a seventh ranked LSU team in last year’s Chick-fil-A Bowl.

Watson’s 2016 numbers (67.6% completions, 37 TDs, 15 interceptions) compare favorably to his 2015 stats (67.8% completions, 35 touchdowns, 13 picks), but the difference Watson can make against Ohio St. will be made with his legs. The Buckeyes have the nation’s 13th-ranked rushing defense, and fifth-ranked pass defense. Watson – and running back Wayne Gallman – will have to make the Buckeyes respect the threat of the run so the passing lanes will open. The Buckeyes rank third in the nation in scoring defense (14.2 points per game allowed) with 25 takeaways (tied for 10th nationally). The secondary is especially good, with sophomore safety Malik Hooker the standout with six of the Buckeyes’ 19 interceptions, plus 10 passes defended. The Buckeyes’ pass efficiency defense (91.43 rating for opposing quarterbacks) leads the nation.

The Buckeyes have struggled this season covering receivers in the slot, and the Tigers can take advantage of that by letting Artavis Scott run out of the slot a good portion of the evening. This one is tough to call, but I give the slight edge Clemson because I think they have the two best players on the field in Watson and receiver Mike Williams. ADVANTAGE: SLIGHT TO CLEMSON

Quarterback J.T. Barrett enters the postseason as the nation’s 42nd-most efficient passer after a regular season with 2,428 yards through the air and 24 touchdowns against just five interceptions. Curtis Samuel, with 58.7 rushing yards per game and 68.5 receiving yards per game, is the primary big-play threat. The Buckeyes have struggled to protect Barrett this season – they gave up eight sacks against Michigan in the regular season finale. Clemson is pretty good at getting to the quarterback, so the onus will be on Barrett to get the ball to his receivers quickly and take advantage of open rush lanes with his legs.

Clemson is ninth in the nation in total defense, 12th in scoring defense, third in sacks and third in tackles for loss. There is an All-American player at each line of defense. Clemson is among the national leaders in terms of tackles for loss for the fifth straight year. The Tigers have 112 tackles for loss so far, second to Michigan’s 114, and now have 591 over the last five years, most in the nation. The Buckeyes will be able to hit a few plays when they pick up the blitz and Barrett finds the 1-on-1 coverage, but I am not sure it will happen enough to make a difference. ADVANTAGE: CLEMSON

This is pretty simple. Both teams are solid on special teams, even though the Tigers struggle at times in getting the kind of booming punts that flip the field. Everybody is solid across the board, but in Ohio State's lone loss, Penn State blocked both a punt and a field-goal attempt, which it returned for the game-winning touchdown. The game may well be decided here. ADVANTAGE: EVEN

The key for Clemson defensively will be making Barrett a pocket passer and finding a good matchup for Samuel. The Tigers will match up man free, so whoever Venables elects to put on Samuel will have his hands full. Also, can the Buckeyes take advantage of Venables’ late play calls and use shifts and motions- like Pitt – to keep the Tigers off balance? Offensively, the offensive line will have to generate enough of a push in the running game to keep the Buckeyes honest, but at the end of the day it’s going to come down to Watson and his playmakers. I’ve watched both teams, and I think Clemson is just a little bit better.