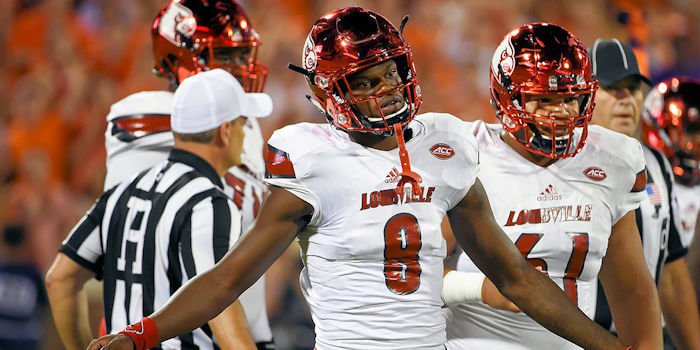 Lamar Jackson is talented, but hasn't faced a defense like Clemson's

Lamar Jackson versus the Clemson defense.

The Heisman Trophy winner versus that defense.

Jackson is an unbelievable talent, and the Clemson team and fans saw that first-hand last year when he almost led the Cardinals to a win in a thrilling game at Clemson.

The Tigers’ defense that night kept him in check for a half as Clemson appeared to have control of the game. But then he broke out and had a dynamic second half only to see Deshaun Watson and the Clemson offense outduel him in the fourth quarter.

But Saturday, Jackson and all that talent get another shot at the Clemson defense. Jackson has grown as a passer since last season, and that’s a dangerous combination, considering what he can do with his feet, making life difficult for defensive players and coaches.

At the same time, the Clemson defense gets another shot at Jackson. That starts up front with the group of Clelin Ferrell, Christian Wilkins, Dexter Lawrence and Austin Bryant and filters through the rest of the defense, which has been downright dominant and nasty so far.

Still, that defense hasn’t faced a quarterback or a talent close to what it will face Saturday night.

Lamar Jackson is talented, but hasn't faced a defense like Clemson's"

That makes the anticipation of this game, and that matchup in particular, so exciting. Sure, there will be other players on the field and other key matchups. Clemson’s offense will have to improve on his performance against Auburn last week, while Louisville’s defense certainly can improve, as well.

But those players and matchups are going to take a back seat to Jackson facing that Clemson defense.

Can Jackson continue to be as dynamic as he has in the first two games of the season? Will he get some help up front from his offensive line and on the outside from his wide receivers?

Can the Clemson defensive linemen swarm Jackson like they have the Tigers’ first two opponents? Can the linebackers and defensive backs continue to be terrific against the run and in coverage, as well? Can that entire group be as powerful as it has been against Kent State and Auburn?

All those questions will be answered Saturday, and it should be something to see. It’s certainly something that shouldn’t be missed by any college football fan.

The winner of this game will have a leg up in the ACC race, especially with Florida State trying to figure out things without talented quarterback Deondre Francois. If Louisville can win, it can finally get over the Clemson hump after three straight close losses to the Tigers. If Clemson can win, it can continue its mastery of the Cardinals and take another big step forward in a difficult first month of the season.

And the key to all that will come when Jackson has the ball in his hands, facing a Clemson defense that will be focusing all its efforts on him.