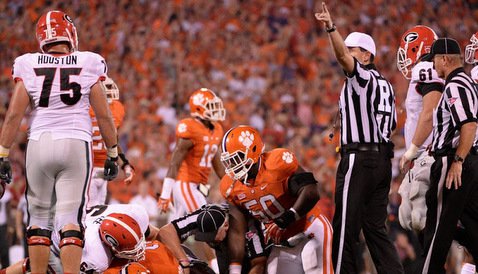 Last year’s game between Clemson and Georgia was an instant classic, a 38-35 back-and-forth thriller that had fans on the proverbial edge of their seats from the time the buses rounded the stadium until the last whistle.

Can this year’s game be just as good? Absolutely.

Georgia returns a bevy of skill players on offense and nine starters on defense, but the Dawgs are also breaking in a new defensive coordinator (Jeremy Pruitt from FSU) and a new special teams coach. On paper, the Dawgs and Tigers match up well – Georgia’s strength just might be on offense, while Clemson’s strength will be on defense. Georgia has those nine starters returning on defense, but has question marks in the secondary. Clemson has experience at the offensive skill positions, but has question marks at running back and on the offensive line.

A quick look at Georgia.

The Bulldogs have an experienced hand at the helm in senior quarterback and former Gatorade Player of the Year in Hutson Mason, who redshirted in 2012 just so he could play this season. He took over when starter Aaron Murray suffered a knee injury late last season, and filled in admirably. He did struggle – the games against Georgia Tech and Nebraska stand out – but led the Bulldogs to a comeback win on the road in Atlanta. He has completed 94-of-157 passes in his career for 1,324 yards, eight TDs and three interceptions.

At running back, all you need to know is that if running backs Todd Gurley and Keith Marshall are healthy, there might not be a better 1-2 punch in the nation. However, keeping both of them healthy has been an issue, as Gurley appeared in 10 games last season and Marshall (torn ACL) played in just five. But when they’re healthy, Marshall has averaged 5.8 yards per carry in his career and Gurley has averaged 6.1 yards per carry.

The same is true for the wide receivers – it was a talented group last season that was decimated by injury. Malcom Mitchell and Justin Scott-Wesley are both coming off torn ACL’s, and Jonathan Rumph had hamstring issues a year ago. If this group is healthy, you add in seniors Michael Bennett and Chris Conley and Mason will have plenty of targets.

The offensive line, however, is a different story. The Bulldogs had trouble with Clemson’s defensive ends a year ago, and heading into this season the one consistent performer is center David Andrews. John Theus will move to left tackle to protect Mason’s blind side, but this group will have its hands full with Clemson’s talented and experienced defensive front. If games are won and lost in the trenches…..

The Bulldogs weren’t just bad on defense last season, they were historically bad. Georgia gave up a program record for points last year, and the most yards per game (375.5) of the Mark Richt era. In some of the bigger news of the offseason, defensive coordinator Todd Grantham bolted for the same job at Louisville and Richt pried Jeremy Pruitt away from Florida State.

The problem a year ago wasn’t necessarily the run defense or the front seven (the run defense finished sixth in the SEC and Georgia finished with 33 sacks), but a porous secondary that allowed too many big plays.

During the off-season, the secondary took further hits when safety Josh Harvey-Clemons was dismissed and cornerback Shaq Wiggins and safety Tray Matthews transferred. There is plenty of talent in the secondary, but Pruitt has to find the right pieces before he faces off against Clemson’s talented receivers.

However, Pruitt has outstanding linebackers in All-SEC selection Ramik Wilson and Amarlo Herrera, a duo that combined for 245 tackles last season. Outside linebackers Leonard Floyd and Jordan Jenkins combined for 11.5 sacks and 45 quarterback pressures.

Junior Marshall Morgan is coming off an all-SEC year in which he hit 22-of-24 field goals, with a long of 56 yards. Punting might be a bigger issue with the inconsistent Collin Barber.

Can Clemson’s offensive line open up enough holes against a Georgia defensive line that returns three seasoned veterans and combined for 19 tackles for loss and 11 sacks and allow the Tiger’s running game get going? Will Cole Stoudt

Cole Stoudt
Sr. Quarterback
#18 6-4, 205
Dublin, OH
View Full Profile be comfortable enough in his first start to take advantage of Georgia’s inexperienced secondary? Will Georgia run the ball right at the Tigers’ front seven, or will Mason be allowed to test the Tigers’ young secondary? The Bulldogs have an experienced kicker and are at home – will that make a difference in the end?

The questions won’t be answered until about 9 p.m. on August 30th, but early indications are that Clemson and Georgia fans are in for another thriller in the border rivalry. This year's edition of the Tigers and Bulldogs matchup might not be as high-scoring, but you can bet that there will be plenty of big plays made on both offense and defense. Will Vegas’ predictions be right and Georgia wins by a touchdown or more, or will Clemson sneak in and surprise some people?