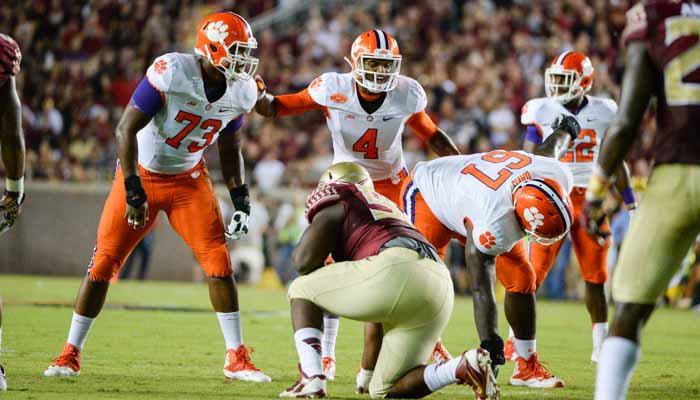 Watson and Tigers face off against Florida St. on October 29th

Clemson and Florida St. are the class of the ACC right now, with the winner of the annual rivalry game usually securing a spot in the ACC Championship Game.

Louisville will be better this year, Wake Forest is making strides, Syracuse has a new coach, N.C. State is building through defense and Boston College is always tough. But there’s no doubt in my mind that the ACC Atlantic Division title will be decided on the field at Doak Campbell on October 29th.

That’s a tough task for the Tigers, who haven’t won at Florida St. since 2006, a 27-20 victory engineered by Will Proctor. Clemson has beaten Florida St. three times since that game, but all three times have been within the friendly and loud confines of Death Valley.

The Tigers and Seminoles will once again battle for the division crown – and national rankings – in 2016. Florida St. head coach Jimbo Fisher has one of the nation’s best running backs in Dalvin Cook and a talented and fast defense, but like Clemson will rely on younger players in 2016.

“Very happy with the results which we got as far as our competitiveness. Our young players developing, taking bigger roles in the offense, defense and special teams, not with just our returning starters who had experience but a lot of guys who will be counted upon this year to have quality minutes and to have an opportunity to participate and even compete for starting jobs,” Fisher said. “But I love the competition in spring. Had a very wide-open spring at all places, and I thought made some significant improvements. Had much more offensive linemen to work with, I think, which is very critical in not only their development but your team development.

“A lot of your young skill guys on the twos and threes to be able to execute more because you can be able to block people in practice and do the things you have to do, and our depth is growing, and very excited. I think we have 16 or 17 starters coming back, but still are a very young football team with only 12 seniors but a very experienced group, so very excited for them, very proud of the way they competed in spring.” 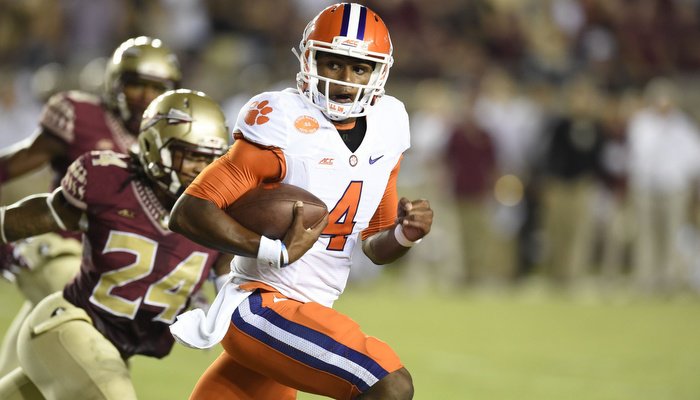 Watson and Tigers face off against Florida St. on October 29th"

The Seminoles open the season with Ole Miss, and Fisher said the ‘Noles will have to have a great summer.

“Our coaches did a great job with our young players, and we can see the direction which we're going. Still have a lot of work to do in all phases of our game, but I think everyone does at this time of year,” he said. “But we can start to see where it's coming together. It will be very critical for us to have a great summer, as it will for everybody, but I think going to camp, and we open up with Ole Miss, so it's going to be -- I think that gives you some inspiration and some encouragement to make sure that -- you've got to be ready right out of the gate, so I think that's going to be very important because our schedule gets very tough right off the beginning, not with just them but with Charleston Southern, Louisville and South Florida right off the bat in the first four games.

“Very challenging but very excited about where we're at, love our team dynamic so far, and just hopefully we can carry it into summer and throughout the fall camp.”

Florida St. has competition at quarterback, with the steady and experienced Sean Maguire battling the dynamic Deondre Francois.

“You have to look at who gives you the best chance to be successful in the game. At the bottom line, that's what it gets down to,” Fisher said. “All decisions are based on the success of the team, and experience is a big part of it, but also -- people say experience, but people act like Sean is not very talented. Sean has a great arm and can move and do great things, but Deondre is very talented. Malik is very talented, J.J. is talented, so we'll wait and see how that comes out, but that will be factored in.

“But also you have a lot of scrimmages and things to put in place, and whichever gives us the best chance to win will be the guy who plays.”

The injury to Lorenzo Featherston

“He's been out back in spring. I saw some articles people put on my desk yesterday that it was a big deal, but that's something we had said even back during spring practice. It's something that most likely he will unfortunately because he was actually playing very well for us, but that's just an unfortunate part of football that comes in.”

Update on Dalvin Cook after surgery

“He's doing fine. His recovery is going very well. He'll be in that sling for another week or so, and then he'll start the rehab stuff, but everything come out great. They were very happy with the surgery, and he'll be running full speed in training when June comes in and when the first day of the camp he'll be running and doing things and be ready to go when August comes in. He'll be ready to roll.

“But he's continued to be himself. He's a tremendous leader, tremendous vocal leader, sets by example, does a great job with our guys. He is -- really, as I say, was always a quiet leader, now he's become a very vocal leader, and he needs time to step up. I've been very pleased with his maturity and his progress.”

Being in Top 10 consistently

“Oh, I think it's very critical. You always want to be a top-10 team. We've done it three of the last four years. I think we finished 14th last year, but other years we've been in it. You always want to be a top-10 team to be relevant for the National Championship, and it's very tough because of the parity in college football today. I think with scholarship limitations and all the people that are playing and the kids that leave early so much, that your programs, they don't have a lot of fourth- and fifth-year seniors all the time. I think it becomes even tougher and tougher.

“Everyone has the same challenges, and we all have -- then some of us have different challenges and others have other challenges that we don't. But it's very critical. It's what your goal is. It's what your aspiration is is always to be the one of the best top teams in the country, and hopefully at Florida State we can continue to do that.”