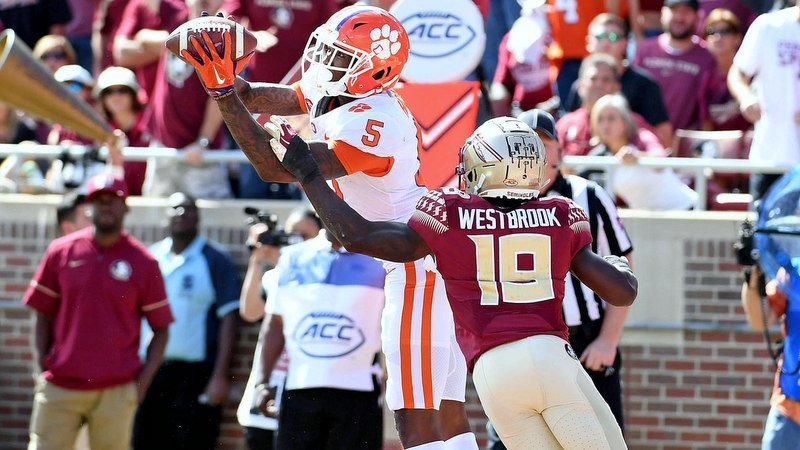 TALLAHASSEE, FL – It took some time for Clemson’s offense to get going but once they did, they were hard to stop.

A second-quarter surge led to a 28-0 Clemson lead at intermission.

PLAYER OF THE HALF: Clemson’s offense lacked rhythm for the first quarter but then the passing game came alive with the Trevor Lawrence and Tee Higgins connection. Higgins had five catches for 41 yards and two touchdowns. Lawrence wasn’t just targeting Higgins in the end zone as the sophomore Tennessee native made an impressive catch on the sideline showing his hand strength as he gripped the ball to keep a low throw from hitting the ground.

STAT OF THE HALF: Trevor Lawrence has thrown for 14 touchdowns this season tying Deshaun Watson’s record for most touchdown passes in a season by a freshman.

*Clemson found some rhythm on offense in the second quarter. Lawrence seemed to settle in and the running game got going with Travis Etienne breaking arm tackles.

*Clemson’s defense was getting plenty of pressure on Deondre Francois forcing errant throws and two fumbles on the snaps.

*Big man touchdown…The offensive staff made a tweak to the jumbo package. Trevor Lawrence handed the ball off to Christian Wilkins who followed Dexter Lawrence into the end zone for a 21-0 Clemson lead with just over three minutes to play before halftime.

*Punting continues to be a liability for Clemson. Will Spiers shanked a punt in the first half that decreased his game average to just 26 yards per punt after just two punts.

*FSU used Clemson’s aggressiveness on defense against them at times using quick passes to negate the pass rush.

TURNING POINT OF THE HALF: Early in the second quarter, Greg Huegel came on to attempt a field goal and missed it but Florida State hit him low giving Clemson the ball back. Three plays later, Lawrence hit Higgins for a seven-yard touchdown.

WHAT CLEMSON NEEDS TO DO TO WIN: Just keep doing what you’re doing.

Florida State is trying to get into the heads of the Clemson players, but it didn’t work as it only fueled them to play better. The defense needs to continue to pressure Francois. The offense needs to use the passing game to open up ground game for Etienne and the running backs.