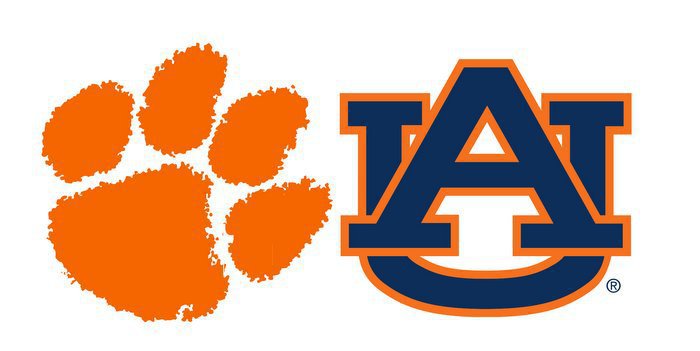 Clemson and Auburn kick off at 9:05 pm EST

Football is back, and for Clemson, it starts Saturday night at 9:05 on The Plains when the Tigers take on Auburn in a nationally-televised contest.

The game is the opener but it’s also critical for both teams – it’s an ACC-SEC matchup, Clemson has College Football Playoff aspirations and Auburn head coach Gus Malzahn is firmly on the hot seat after two very average seasons.

Clemson has won the last two in the series, but Auburn holds a 34-13-2 lead in the all-time series and Clemson hasn’t won in Auburn since 1950.

There’s a lot on the line Saturday night. How will it go?

(at the Georgia Dome)

Streak: Clemson won 2 in a row

John Heisman was not an Auburn graduate, but he came to Clemson from Auburn. He coached at Auburn from 1895-1899 and came to Clemson to coach the 1900-03 era. Heisman was 12-4-2 at Auburn before coming to Clemson. He was 19-3-2 as head coach of the Tigers for those four years. He then left Clemson to become the head coach at Georgia Tech. His .833 winning percentage is the best in Clemson history. Heisman coached at each school within the first two games of this series. He defeated Clemson for Auburn in 1899 by a 34-0 score, then defeated Auburn as Clemson’s head coach by a 16-0 score in 1902.

WHEN AUBURN RUNS THE BALL

Auburn runs a read-option offense that’s predicated on the run. Starter Kerryon Johnson had 52 rushes for 208 yards last season with three touchdowns. His backup is Kamryn Pettway, who had no carries last season and redshirted in 2014. Quarterback Sean White isn’t a great fit for Malzahn’s offense but is a better runner than people think. He had 30 carries for 35 yards last season, but sacks took out a good chunk of his yardage. Clemson’s defense is strong up the middle with Carlos Watkins and Scott Pagano but might have trouble on the edge. The Tigers also have two new starters at linebacker in Dorian O’Daniel and Kendall Joseph. ADVANTAGE: SLIGHT TO CLEMSON

WHEN AUBURN THROWS THE BALL

Marcus Davis is the leading returning receiver after catching 30 passes for 182 yards last season, but he averaged just over six yards per catch. White completed just 58 percent of his passes (83-of-143) for 1166 yards, with one touchdown and four interceptions. White was a better passer before a mid-season injury, and his receivers didn’t help his cause with several drops last season. Clemson’s secondary is being rebuilt with new starters at both safety spots and one corner spot. However, the Tigers are led by All-ACC corner Cordrea Tankersley and have experience in safety Jadar Johnson, Can the Tigers get a pass rush from Clelin Ferrell, Richard Yeargin, and the young defensive ends? ADVANTAGE: SLIGHT TO CLEMSON

WHEN CLEMSON RUNS THE BALL

The Tigers return two thousand-yard rushers in quarterback Deshaun Watson and running back Wayne Gallman. Watson is a big part of the Clemson rushing attack, and the offensive line charged with opening holes is led by senior center Jay Guillermo. Keep an eye on Taylor Hearn, who will be making his first start at left guard. The other four linemen have experience. The Tigers also use the jet sweep as part of the running game, even though the quick flip forward is considered a pass. Ray-Ray McCloud and Artavis Scott are used mainly on that play, but freshman Tavien Feaster might get a look. Auburn is led defensively in the middle by defensive tackle Montravius Adams, who had 44 tackles a year ago. The linebackers are young and unproven. ADVANTAGE: CLEMSON

WHEN CLEMSON PASSES THE BALL

Sophomore right tackle Jake Fruhmorgen will play a huge part in the passing game. He will likely face up against junior defensive end Carl Lawson, who is a terror when healthy. He had just one sack a year ago, missed all of 2014 and had four sacks in 2013 as a freshman. Watson, however, has a bevy of receivers to throw to, including Mike Williams, Deon Cain, Scott, McCloud, Hunter Renfrow, Trevion Thompson and freshman Cornell Powell. Add in tight end Jordan Leggett and the Clemson passing attack is lethal. ADVANTAGE: CLEMSON

Auburn kicker Daniel Carlson is a weapon, hitting 23-of-27 field goals last season while also hitting 71 percent of his kickoffs into the endzone. Punter Kevin Phillips averaged 41 yards per punt. Clemson’s Greg Huegel struggled on extra points but was solid on field goals and says he has the leg to be consistent on kickoffs this season. Punter Andy Teasdall averaged 39.1 yards per punt a year ago. Neither team stands out in the return game. ADVANTAGE: SLIGHT TO AUBURN

This one could be closer than people think. Auburn has talent across the board, their coach is desperate and they have the advantage of playing late at home. Auburn’s offense has some success as Clemson’s defense tries to settle in, but a close game at the half starts to see some separation as Watson and the receivers find holes in Auburn’s secondary. Much of the fourth quarter isn’t in doubt as Clemson wins for the third time in a row against Auburn. FINAL SCORE: CLEMSON 37, AUBURN 20