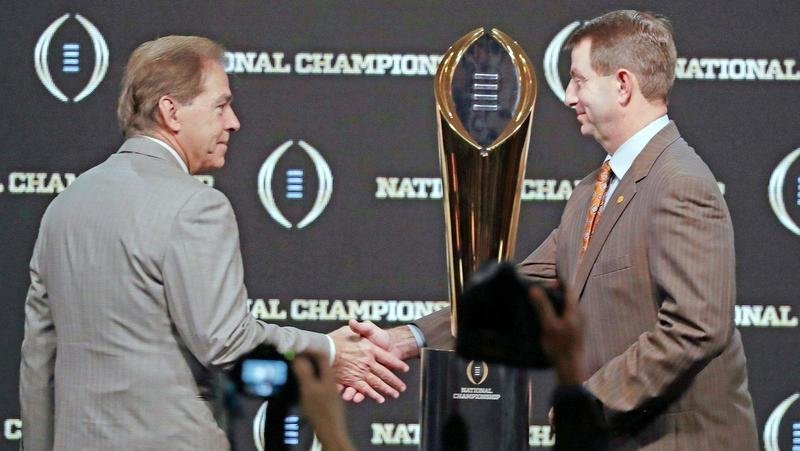 Welcome to the heavyweight title fight.

No. 1 Alabama and No. 2 Clemson square off later today in the College Football Playoff National Championship Game at Levi’s Stadium. Alabama and Clemson will meet for the 19th time in series history and the fourth consecutive season in the College Football Playoff. Monday’s matchup will also be the third pairing between the two schools in the CFP National Championship Game with a 1-1 split in the previous two matchups.

The Crimson Tide holds the all-time series advantage at 14-4, including a 2-1 mark in the Playoff. The two teams last met in the 2018 CFP Semifinal at the Allstate Sugar Bowl on Jan. 1 in New Orleans, La., with Alabama posting a dominant 24-6 win over the Tigers. Crimson Tide head coach Nick Saban is 3-1 all-time against Clemson.

Who will win the rubber match? That’s what we’ll find out Monday night.

*Alabama’s 45-34 win over Oklahoma in the 2018 College Football Playoff Semifinal at the Capital One Orange Bowl was the 55th victory for the members of the Crimson Tide’s senior class. The group has posted a record of 55-3 (.948), won two national championships and three Southeastern Conference Championships, and has appeared in four consecutive College Football Playoffs, including three straight CFP National Championship Games. The 55 wins surpass Alabama’s 2017 senior class (53-5; .914) for the most wins by a senior class in NCAA history.

*A Clemson win on Monday would tie the two senior classes with 55 wins and two national championships each. In addition to four consecutive ACC titles and College Football Playoff berths, Clemson's senior class has also all but assured itself of a fourth consecutive AP Top 5 finish. Prior to 2015, Clemson's only AP Top 5 finish in school history came in 1981 during the program's first national championship season.

*Clemson has won five national championships, including two in football, in its athletic history. In addition to the two football titles, Clemson has won two in men’s soccer (1984 and 1987) and one in men’s golf (2003). The first football title came at the Orange Bowl against Nebraska at the end of the 1981 season, a 22-15 victory under Head Coach Danny Ford. That was the first title in any sport in school history. Clemson then won a second title at the end of the 2016 season against Alabama in a game played in Tampa.

WHEN ALABAMA HAS THE BALL

Alabama's quick-strike offense is propelled by wideout Jerry Jeudy, who's netting a whopping 18.7 yards per grab. In addition to his 13 touchdowns, he's tops on the team with 63 receptions and 1,176 receiving yards. Getting the ball into his hands is sophomore quarterback Tua Tagovailoa, who has tossed 41 touchdowns against only four interceptions. For the season, the sophomore signal caller has recorded six 300-yard games, including one last time out against Oklahoma. In that game, he completed 89 percent of his attempts and tossed four touchdowns -- including a 13-yard pass to Jeudy in the fourth quarter to seal the victory.

The workload on Monday night is likely to be split between three options. Senior Damien Harris leads Bama with 819 yards and nine touchdowns, with Najee Harris (724 yards) and Josh Jacobs (593 yards) each receiving carries.

However. Clemson boasts the nation’s No. 2 defense. The Tigers are yielding a measly 12.9 points per game, and in nine of their 14 contests, they have held opponents to 10 points or fewer. A big key for Clemson – not allowing the Alabama offense to score early and often, a key component in their 14 wins this season. A stop or two (or three in the first quarter would be huge).

The key to this matchup is Jeudy and Tagovailoa against the Clemson secondary, which has been better the last two weeks but has struggled against premier passing competition. The Tigers will have to get pressure on Tagovailoa – something Georgia did to great effect in the SEC Championship Game – and force him to get rid of the ball early. The matchup I don’t like here? Clemson covering Alabama’s slot guys. This one looks really even to me.

ADVANTAGE: EVEN (even though I wouldn’t argue a slight advantage either way)

The Tigers have a dynamic quarterback of their own with Trevor Lawrence. The freshman took over the starting job from Kelly Bryant and has passed for almost 3,000 yards with 27 touchdowns. Running back Travis Etienne has been a huge factor in the Tigers’ success. Clemson averages more than 250 rush yards per game, with Etienne rushing for 1,572 yards this season. Of Clemson's 537 carries this season, Etienne has accounted for 190 (35 percent). That's a huge change from last season, as Bryant led the Tigers with 173 attempts in 2017.

How important has Lawrence been to Clemson’s success? After connecting on just 18 throws of 30 yards or more in 2017, the Tigers have 32 such plays in ’18. The offense also has 11 completions of 50-plus yards, including a 52-yard touchdown throw from Lawrence to Justyn Ross in the Cotton Bowl victory over Notre Dame.

Tee Higgins leads the offense in receptions (56), yardage (855) and touchdown catches (11) and has the size (6-foot-4) to be a nightmare matchup. Ross has been one of the top freshman playmakers in the nation this fall. He enters Monday night’s game with 40 catches for 847 yards and eight touchdowns and led the team with 148 receiving yards in the win against the Fighting Irish. Amari Rodgers (53 catches) and Hunter Renfrow (47) round out the top targets for Lawrence on the outside.

The Tide will follow the gameplan of almost every other team Clemson has played this season – stuff the run and make the passing game make plays down the field.

Neither team has excelled in special teams. Alabama is 14-for-19 on field goal attempts but has also missed eight extra points. Clemson is 11 of 17 on field goal attempts and both teams average less than 40 yards per punt. Jaylen Waddle has a touchdown and averages 15.7 yards per punt return for Bama, while Amari Rodgers has a touchdown return for Clemson, even though he averages just over seven yards per return.

Josh Jacobs has a kickoff return for a touchdown for Alabama.

Let’s face it, the Crimson Tide is probably a tick better than Clemson overall. They do almost everything well and rarely beat themselves. The Tigers will have to play one of their best games in two years in order to come out with the win.

Swinney says that when you play a team with similar talent – and these teams are close – five plays make the difference in the outcome. Alabama has the history and perhaps the greatest college football coach of all-time along with a stacked roster.

Clemson has the intangibles, however. The Tigers are just as loaded and have a senior class that has refused to lose all season. I heard one national writer say Sunday that he believes Clemson will win because of guys like Clelin Ferrell, Austin Bryant, Kendall Joseph, and Christian Wilkins. Those guys came back to Clemson for this moment.

The heavyweight title fight goes to the team with the most heart.