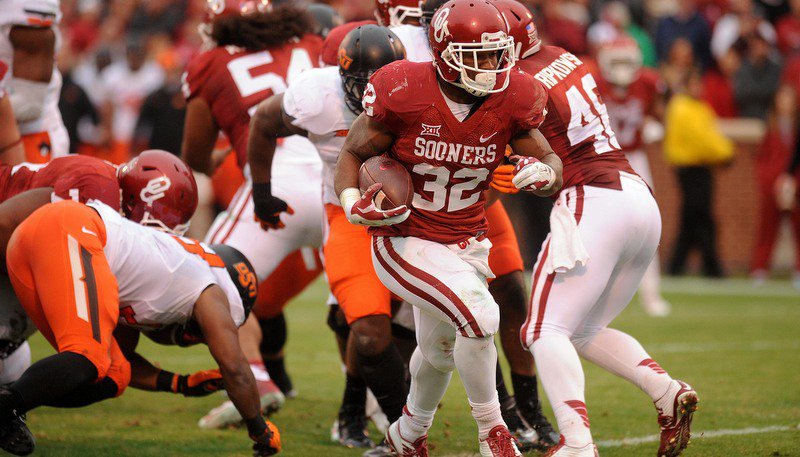 Samaje Perine is one of the nation's best backs (Photo by Mark D. Smith)

CLEMSON – Clemson will play Oklahoma in the Russell Athletic Bowl on Dec. 29th in Orlando, Florida, and one ACC media member tweeted out Sunday afternoon that the game has a BCS feel to it.

Not only does it have a BCS feel, but features plenty of storylines starting with Clemson defensive coordinator Brent Venables

Brent Venables
Def. Coordinator / Linebackers
View Full Profile facing off against the Sooners, a team he coached for from 1999-2011.

Going into Saturday’s action, Oklahoma had a slim chance to leap up the Big 12 bowl picture into the Alamo Bowl if things fell right. However, after Saturday’s 38-35 overtime loss to Oklahoma State, the Sooners fell into the lap of the Russell Athletic Bowl. The Sooners have never played in the bowl, which is in its first year of affiliation with the Big 12.

The Sooners feature one of the nation’s best backs in freshman running back Samaje Perine. Perine rushed for 151 yards and two touchdowns before leaving with a third-quarter ankle sprain Saturday, but still made Oklahoma school history. Perine set the school record for rushing yardage over a three-game period.

Defensively, Oklahoma is ranked 54th, giving up 382.3 yards per game.

Adding to the intrigue of Venables vs. his former team and the prolific offense is the status of Clemson quarterback Deshaun Watson

Dabo Swinney
Head Coach
View Full Profile has said that Watson will have surgery after the bowl game.

Tony Elliott
Assistant Coach / Running Backs
View Full Profile to co-offensive coordinator – the game will mark the debut of the play-calling combo, even though we have heard that Elliott will call the plays.

The teams squared off once before in a bowl game – Clemson defeated Oklahoma 13-6 in the Citrus Bowl on January 2nd, 1989.

In a match up where both teams had a 9-2 record, tenth-ranked Oklahoma, playing their final bowl game and last television appearance for two years due to pending probation, squared off against #13 Clemson, Atlantic Coast Conference champions for the third straight year.

Rodney Williams led a late touchdown drive to lift Clemson to the win. Williams ran for two first downs on option plays and completed all three passes he attempted in the 80-yard, 15-play drive. He hit his tailback, Terry Allen, for 11 and 6 yards, and later moved the Tigers to the 5-yard line when he found Ricardo Cooper on a 10-yard completion.

Two plays later, Allen scooted in from the 4 with 10 minutes 28 seconds remaining. Allen was the game's most valuable player with 53 yards rushing and 47 receiving.

The Sooners will make their 48th bowl appearance, earning their 16th straight bowl bid under head coach Bob Stoops. Only three schools have longer active consecutive streaks of bowl appearances recognized by the NCAA – Virginia Tech (22), Georgia (18) and Georgia Tech (18). The Sooners have an all-time bowl record of 28-18-1 and have won four of their last five bowl appearances under Stoops. Oklahoma will be making its inaugural appearance in the Russell Athletic Bowl.

The Sooners will be facing an ACC opponent in a postseason contest for the first time since registering a 48-14 victory over Virginia in the 1991 Gator Bowl. Current Oklahoma running backs coach Cale Gundy completed 25 of 31 passes for 329 yards with two touchdowns in that game as the Sooners tied a school scoring record in a bowl contest.

We all know the Clemson Family enjoys the pregame celebration, and it’s time for the biggest tailgate of the year for our final game. Join us in the Clemson tent, located in Fan Fest for a picnic tailgate. Tickets are $25 per person and include food, beverages (beer & wine) and lots of fun! CU in Orlando!

All parking passes for the Russell Athletic Bowl can be purchased online at RussellAthleticBowl.clickandpark.com or by calling 866-330-7275. Order your parking pass now as, lots are expected sell out.

* Tickets will be available for purchase on ClemsonTigers.com at 7 p.m. *