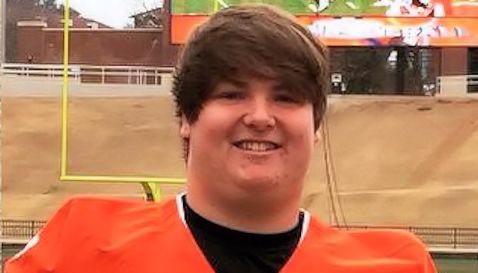 Elder was on campus this past weekend

Clemson offered the LaGrange (GA) lineman in early February and Elder visited Clemson the weekend of the Tigers Elite Junior Day festivities. He was back this past weekend for another junior day and came away impressed with he saw.

“We got there about 9:45. We actually stayed there Friday night. We checked in upstairs at the Recruiting Center on the top floor of the WestZone,” Elder told TigerNet. “We watched practice from the WestZone while they warmed up and then we went down to the field to watch practice. It was cool to get to see them do their thing and watch Coach [ Robbie Caldwell

Robbie Caldwell
Assistant Coach / Offensive Line
View Full Profile ] coach for a little bit and Coach [Thomas] Austin. Whenever they did one-on-one and three-on-three drills, it was cool to see them compete like that. It really got me in the mood to go play. I've been missing it.

“After that we hung out and we ate and talked with the academic people. They introduced all of the coaching staff after lunch. From there we split up and the offensive guys went to see all of the athletic facilities at the stadium - weight room locker room, hang out, talk to coaches, take pictures. After that we got on a bus and went around to see Howard's Rock. Then we got on the bus and toured everything - the campus, academics, all of the buildings, and the dorms. I hadn't been able to do that when we went up for a quick tour. We only saw the athletic stuff the last time we were there. Getting back up there to see everything was really nice. I was really looking forward to it.”

Elder has offers from Cal, Clemson, Florida St., Georgia Tech, Louisville, Ole Miss, Miss St., UNC, South Carolina and Tennessee among others, but says he knows Clemson is a place he wants to visit again.

“I haven't really sat down and nailed anything down but I want to try to get back up there. We just have to figure out a good time,” Elder said. “I would say Clemson is an early leader, but not a favorite - not that strong. I like them. It's Clemson, Tennessee and Ole Miss. To clarify, those are just the ones that have offered. I haven't visited everywhere that I want to, so that could change but right now I'm like those three.”

“The all-around atmosphere - the place, the campus, the coaching, the staff, just how they are as a school and as a staff. I just really like how they do things,” Elder said.

Elder said he doesn’t have a timeframe for making a decision, but said he will pull the trigger when he knows the time is right.