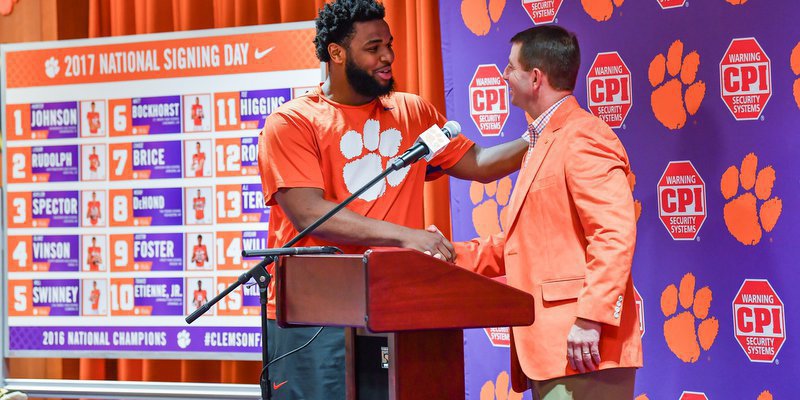 CLEMSON – Clemson didn’t sign the nation’s largest recruiting class Wednesday, but what it lacked in quantity it made up for in quality.

Clemson signed 14 prospects to national letters of intent on National Signing Day, and added a special walk-on in Central (SC) Daniel wide receiver Will Swinney, the son of the head coach.

Clemson head coach Dabo Swinney met with the media in the new team room in the sparkling Clemson Football Complex late in the afternoon to recap the day.

“What a great day it has been. It's been an unbelievable day in so many ways. There have been a lot of emotions today all across the board from excitement about the new class, excitement and joy about the new building, excitement about my son, sadness about my friend,” Swinney said. “It's just been quite a day. It's been so good to see so many people today and most importantly to have a great group of young men that signed up to come be a part of our program. It's always exciting when young people choose to come be a part of our program. We got better.

“We had a great group leave and we've got some very talented guys to come in here and fill some voids and to continue to move forward. I love it when guys choose to be a part of our program because we lay it out for them. We don't sugar coat anything. We're very open and transparent in how we recruit and talk about our program. It scares a lot of guys off, but that's a good thing. It's exciting because there are a lot of really talented football players that really want to be a part of the way we do things here and that never gets old for me.”

The class was the smallest in size since Swinney’s first, a group he calls the Dandy Dozen. 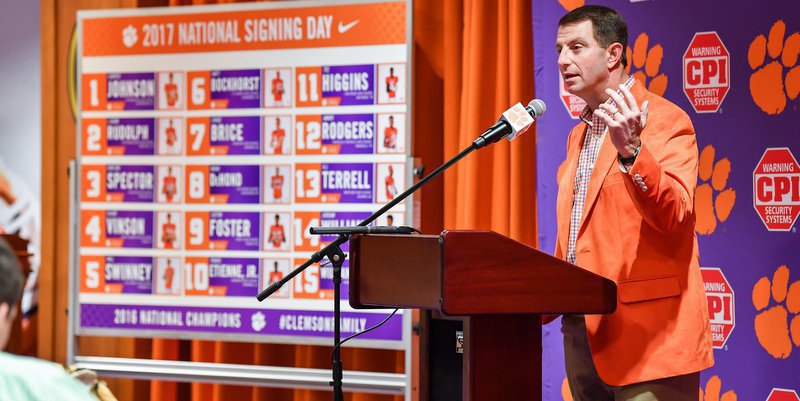 “This is the smallest class we've had since 2009 - my first class - but another excellent group of quality young men,” he said. “I think it's our seventh top-15 class in a row. We've become very consistent in how we recruit and how we do everything - academically, how we compete on the field, how we respond to certain things. I don't doubt this will be another excellent group that will join the fold.

“We had four midyears and 10 signees today - 14 guys. Again, small class but most of them had been committed since the summer. We met all of our critical needs, I don't have any doubt. We always work really hard to bring in a few walk-on guys that we think fit our culture and fit the program. We've got two or three this year and really only one that I can talk about per the rules and that's my son, Will.”

Will Swinney will have a chance to play early.

“It was a really special day for me to have WIll choose to be a part of our program. I had a chance to go over to Daniel to celebrate that for him. Will grew up here - preschool, kindergarten, elementary, middle and high school,” Swinney said. “He's grown up a Tiger and this has been his dream. He had four or five opportunities to go other places and to me as his father, I'm really proud of him in how he handled himself in high school and how he's handled all of the other stuff. As the coach, I'm even more proud because if there's anybody that knows any wart that we have in the program and knows the program inside and out, it's my son.

“For him to choose to want to stay here and be a part of that, I think that's the best compliment I can give the people in this building. It's exciting to have him come join us. He's a good little wideout and I don't have any doubt he'll carve out a niche for himself there and he has a chance to help us right away as a holder. He's held for five years and with Seth Ryan and Andy Teasdall moving on, there's a void there.”

“The four mid-years in the spring are huge for us,” he said. “We've got four really good midyears that we're excited about - a quarterback, two backers and an offensive lineman. I think it's great to have them on campus and have a head start with them, especially with a small class. The rest of the guys will join us this summer.”

“The thing that has changed over the last five or six years is the reach of our brand. They know Clemson and young players want to come and check it out,” he said. “They want to come see Clemson. The thing we've always known is when people come visit Clemson, usually they're going to like. It's really, really good to have the reach that we have. We signed kids from 10 different states and a couple of states that are little different - one from Ohio, my first recruit from Louisiana, our first recruit ever from Indiana, a couple from Tennessee and one from New Jersey. I'm really excited about the brand and how the reach has really grown for us.

“We've got one of the best running backs in the country and we didn't know him until 10 days ago. This is a young man who had offers from all over the country and could've gone anywhere and he ended up coming to Clemson and I think that speaks highly to the strength of the paw. I think he's got an incredible skillset. He's as talented a guy as we've signed. I don't think there's any question about that. You've just got to go to work.”