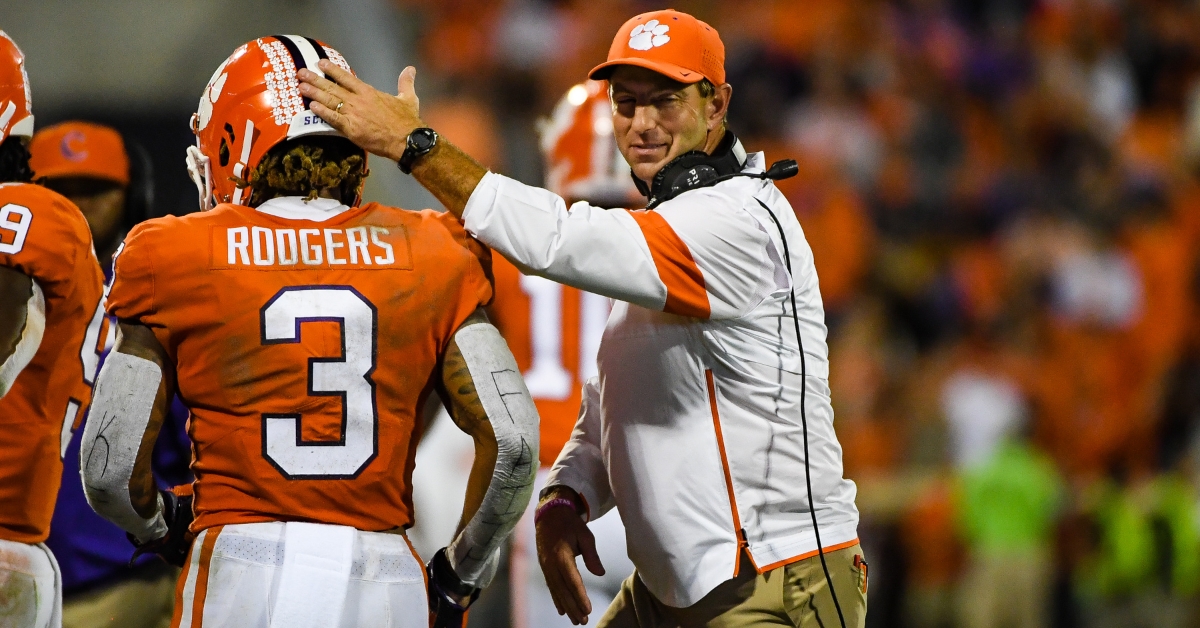 Swinney had a meeting with the players at his house earlier this week.

Clemson head coach Dabo Swinney has been criticized on the airwaves and on social media over the last few weeks, but the ones who know him best, his players, said Thursday that their head coach has handled it “perfectly.” They also say he has empowered them to create the change they seek.

The use of a racial slur by an assistant coach followed by Swinney wearing a “Football Matters” shirt to the pool to the false tweet by a former player that Swinney also said something inappropriate has been met with vitriol from across the nation.

Swinney hosted several of the players at his house earlier this week to go over the events happening within the program and in the country, and his players appreciated the gesture.

“I feel like Coach Swinney, knowing him personally for going on five years now, he’s been nothing short of amazing to me and my family since the day that they came to my house and recruited me,” senior wide receiver Cornell Powell said. “He’s such a genuine and loving guy, and everything can be taken and misconstrued, but Coach Swinney is really a genuine, loving person, and every player that he’s ever coached can back that 100 percent.

“And everything that’s been going on, he’s handled it perfectly, to me. I feel like he’s come out and he’s communicated with us, the seniors having that conversation, that discussion and then having the team meeting to address the situation and letting everyone get their feelings out and not trying to hide behind things.”

Quarterback Trevor Lawrence said those who are outside of the program simply don’t understand what their coach stands for.

“I think with Coach Swinney, for people that don’t know him to the public eye, it’s easy to judge the things that he does,” Lawrence said. “But the biggest testament to who he is, is the people that are around him every day — his family, all of his teams that he’s ever had and just the glowing views of what we have on him and the person he is.

“He’s proven that every day that we’ve been around him that he’s genuine, and we trust him. He’s been behind us this whole time, and I think sometimes from the outside looking in, it’s a little easier to judge some of the things he does because you don’t really have that relationship with him. But we fully support him, and he fully supports us.”

Rising sophomore linebacker Mike Jones is one of the leaders of a peaceful demonstration that will take place Saturday in Clemson – ending on Bowman Field – said that Swinney has shown a willingness to learn and listen to his players.

“Coach Swinney has been an awesome dude ever since I met him,” Jones said. “Just one thing for me, personally, it’s good to know that he is trying to understand certain things that are different from me and him. Just knowing that he wants to understand, he identifies there needs to be change, and now he’s like, how do we do the change? That’s what speaks to me, because a lot of people can hear stuff but to go do it is actually helping.”

Rencher said Swinney empowers his players to create the change they desire.

“I think the best thing he’s done is to consult the seniors, our staff,” Rencher said. “We’re trying to come together as a team and be unified. We don’t want to let anything divide us. That’s kind of the message for our community is like, this can be a moment to divide more people, but we want to unify. I feel like Coach Swinney’s tried to do that really well with our players, our staff and also just anybody.

“As he’s empowered us through PAW Journey and through other things, for us to even have this on Saturday, that was him empowering us for years, giving his players more of a voice so we can use it to make some change.”