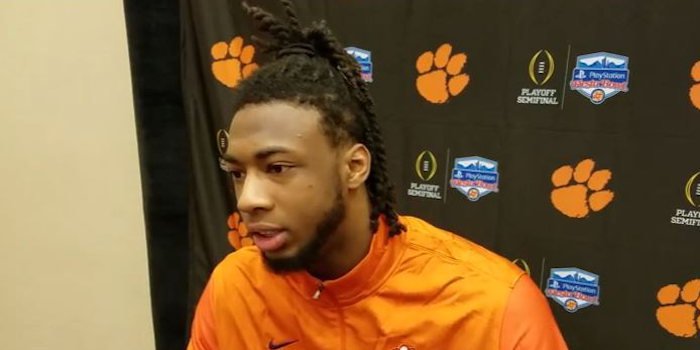 Mike Williams said getting back to the CFB Playoffs was a big motivation for him.

Center Jay Guillermo, receiver Mike Williams, running back Wayne Gallman, tight end Jordan Leggett, and coaches Jeff Scott and Tony Elliott spent an hour answering questions from the media, which means there are plenty of qood quotes to pass along.

Q. What's the mentality of the Clemson offense. Are you unstoppable?

“But if I feel like if we come in, we're able to run the football and be able to have those two dimensions -- because obviously the wide receivers we got and the quarterback we got, we can throw the football.

“But if we can add that extra piece of being able to run and really give that balance, I feel like we're a pretty hard football team to stop.”

Q. You are one of the vocal leaders on this team. When you saw what Jadar said yesterday, did you go up to him and say come on –

“I didn't even know what he said until I was over in the other room when they asked me about it. That's Jadar for you. He likes to talk a little bit. But, yeah, you always have to respect your opponent.

“I mean, you can't go back and take back what he said.”

Q. What do you remember about being in the stadium last year and watching?

“Yeah, that was a tough moment. I wanted to be out there to help my teammates, but unfortunately I couldn't. So I just told the coaches that we have an opportunity, if I have an opportunity to come out and play at Clemson I want to get back to a National Championship and win it.”

Q. How hard is it to deal with the draft?

“I really just block it out right now. I mean, I still have a couple more games to play. I have to focus on this and it handles itself. Play well everything is going to handle itself. That's basically the main thing. Just block it all out at the moment.”

Q. What's this like for you personally being in this game being where you were last year, sitting on the sidelines, having to watch, what's it like for you now to know that you're going to be playing on Saturday?

Q. What was the toughest part?

“Just knowing you can be out there helping your teammates. I felt like maybe what if I was out there, we probably would have won. So just things like that. Just saying what if.”

Q. Is that what motivated you? Obviously you were already motivated before then, but did that motivate you even more when you came back in January?

“That was a big motivation to me. I feel like just me coming back this year I told the coaches there I wanted to play in the National Championship.”

Q. Are you excited about the matchup between you and J.T.? You guys are friends, you know each other, you've had some road trips together throughout the times. Is it exciting for you to kind of go up against him since you guys are buddies?

“Yeah, it's going to be a lot of fun just to be able to see him live and each other to compete against one another and just have that friendly competition and best of luck to him and his team. He'll probably say the same thing.

“But it will be a fun task, something that we both talked about whenever we went on some road trips together over the summer and became good friends.”

Q. Are you excited about being back in Arizona, not necessarily a chance at redemption because of what happened last year, but another opportunity to play on that field and get a win and advance and be successful here in the desert?

“Yeah, it's always good to come back down here, even though last year was a short trip. We enjoyed it. And now it's a little extended and being able to see the city, see Arizona a little bit more and just to be able to have another opportunity to play on that field.

Q. I'm wondering, you guys do an awesome job on social media, creating videos and all that kind of stuff, industry leader. You're talking to these kids, communicating with these kids and sending the videos and products whatever. How effective is that in sort of the battle of the hearts and minds of 16-, 17-year-olds? How on the ground do you think that being effective?

“I think it's very effective. And I give Coach Swinney and our AD, Dan Radakovich, they were both pushing for that several years ago whenever it was just getting started. But the biggest thing in recruiting, it's all about relationships and it's all about communicating.

“And maybe 10, 15 years ago, the way you communicated was maybe one phone call a week and handwritten letter. And now everybody walks around with that cell phone in their hands. 18 hours a day. And it's just a great way to get those guys an opportunity to learn more about your program, your brand, the culture, the environment.

“Just like this week, we've been sending them a lot of things from this experience, just the view from our practice field, it was incredible. So we sent that picture to a few guys yesterday. But I think you can get instant feedback with those guys and they enjoy. I mean, all those guys are top players. They have dreams of reaching this level and playing in the College Football Playoff, and they want to know what that looks like. So to be able to kind of get that through coaches and players, I think, is very valuable.”

Q. Is the phone call dead?

“No, I think it's still an important part of it, important piece. But now because you can text with the guys, I mean, I very rarely have to make the phone call. Usually I can text the guy and say how about give me a call at your convenience. But I do think that the verbal communication still is very important. But it's definitely not the frequency. I mean daily, hourly, that you're texting, communicating with these guys, really, year-round.”

Q. Would the bulletin-board material mean anything? Does it do anything at all?

“It doesn't come from the other team as much. It's normally from announcers and stuff like that having their two cents on the game and stuff like that. But whenever Coach Swinney shows us stuff like that it piss us off. Going into a game being the underdog what they say about different players on the team, it definitely makes you mad but you just kind of put that chip on your shoulder go out play ball and prove them wrong.

Q. Because you were here a year ago, you experienced a disappointment here, is this an extremely motivated, even beyond just making a playoff and all the things that you have to play for, is there a motivation to the team, more emotional, bigger than just that?

Q. Ben Boulware, with the beard, he hasn't shaved it since that game. It's like he's hanging on to it almost. First of all, is it a phenomenal beard? And secondly he's in a different category, right?

“He definitely has a pretty solid beard I would say, probably the best on the team. But it's just a matter of how guys approach it.

“I mean, just coming from that last game I don't know if I could have held a beard for that long. But different people attack it different ways. So that's just how he's kind of coping with it until we make it to the National Championship again, hopefully win it this time.”