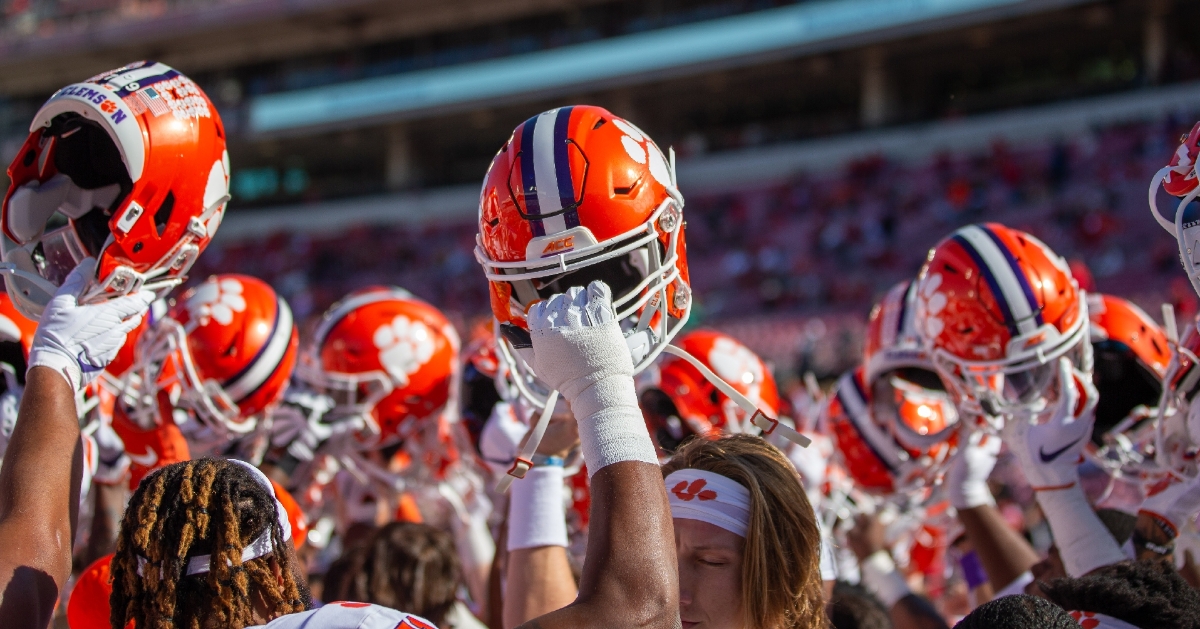 Clemson players and coaches laugh about the polls.

CLEMSON – Clemson defeated Louisville by 35 points Saturday and dropped a spot in the Associated Press poll. All the coaches and players can do at this point is laugh and joke about the absurdity of it all.

Clemson started the season ranked No. 1 and has gone 7-0 to start the season. The Tigers are outscoring their opponents by a 280-84 margin, and many of the opposition’s points have come with the game well in hand and Clemson reserves getting playing time.

They’ve won five of their games by at least 31 points, but have fallen three spots in the writers’ poll. Co-offensive coordinator Jeff Scott said the players and coaches just laugh about it.

“To be honest, we have fun with it. We were joking on the bus on the way back that we wondered how far we would slide now, winning,” Scott said Monday. “Somebody told me yesterday that we've won five games by 31 points or more. Bama is number one and they've won three and two of them were against Group of Five. It's not really the rhetoric that we're seeing out there. I think it's just natural when you've won as many games as we've won.

“I can remember as a college football fan that it gets old at some point whenever somebody else is winning that much. It's just natural. For us, we just kind of laugh about it and joke around about it. Somebody is saying the other day that if we keep winning at this rate, we'll be out of the Top 10 by December. It's really just something we laugh about a little bit.”

Scott said the Tigers are staying focused on only one thing – going 1-0 each week.

“Truthfully, what we know is that we've been here before. We trust our plan,” he said. “We trust our preparation in that if we just stay focused and locked in and keep two hands on the wheel, focus on what matters, which is going 1-0 this week, winning our division is our next goal, it has worked out for us every year that we've been able to stay focused on that. We really have zero concern that it won't work out this year if we stay focused. It's hard enough getting ready for one opponent every week and if you're worried about playing that opponent and four other opponents out there, you're not going to be your best. I think that's one reason we've had the consistency that we've had over the last four years. Other than seeing and laughing about things out there, our guys truly have stayed locked in and focused on doing our part.”

“Then, to everybody's disappointment, we show up in December and we're where we want to be,” Scott said. “That's what it kind of feels like will happen this year if we'll stay focused and take care of our business. It just feels like that's kind of been our position and it's worked well for us. I think if the shoe fits, wear it. We're that horse that's kind of waiting back there and we start making our gains when it really matters when we get into that Championship Phase. It's not something that's talked about a whole lot. We've got a young team - some new guys we've got to educate and keep them informed on what really matters - but we also have a lot of experienced guys that know that if we'll stay locked in to our formula and stay focused that we're going to have a great chance to be where we want to be at the end.”

Defensive coordinator Brent Venables said he understands the frustration of Clemson fans because he had to talk his daughter, Lainey, off the ledge last night after the rankings were revealed.

"I couldn't care less. They see and say whatever they want to say and see. To me, it doesn't have to affect us," Venables said. "We are in control of how we play and whether or not we have an opportunity to continue to win. If we do, let the cards fall where they may. I used to have my son, Tyler, who would get all worked up and now I have my daughter Lainey. She's like, wait a minute, I thought we were number one? She just figured out that LSU and Ohio State (jumped Clemson), so now I'm going to have to talk her off the cliff. She was literally so mad. I guess she is the poster child for all of Clemson nation, I guess. For us, who cares?"

#Clemson co-OC Jeff Scott says all they can do is laugh some times at what pollsters do in ranking the Tigers this season.