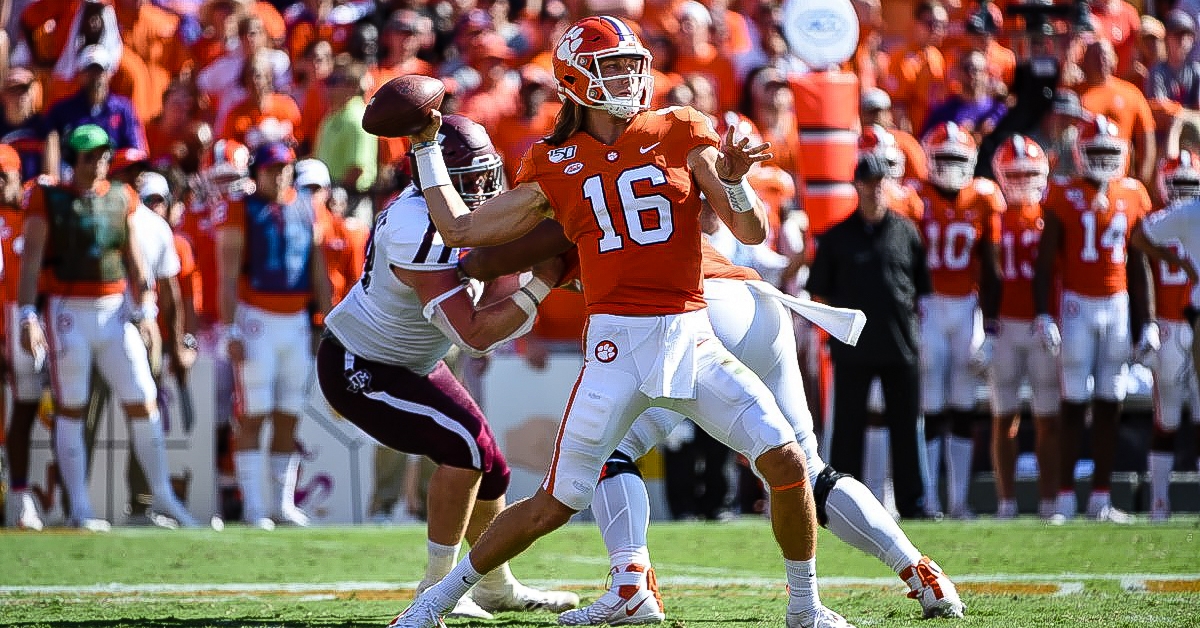 Trevor Lawrence delivers a pass in the first quarter

CLEMSON – Clemson’s offense isn’t in midseason form but it doesn’t have to be. Saturday against a Texas A&M defense that wanted to take away the running game, it was more than good enough.

Running back Lyn-J Dixon provided a bright spot with 11 carries for 79 yards and quarterback Trevor Lawrence completed 24-of-35 passes for 268 yards as No. 1 Clemson downed No. 12 Texas A&M 24-10 Saturday afternoon in Death Valley.

“[Coach] Elko is one of the top [defensive coordinators] in the country and I have a tremendous amount of respect for him,” Elliott said. “We played him at Wake Forest and we played him here the last couple of years. He’s had all offseason and I thought the last time we played him down in College Station he did an unbelievable job of really being able to hone in on some of our tendencies, so early on we were trying to break some tendencies, cat and mouse, see how he was going to play us, not just line up.”

Elliott praised Dixon, who stepped up in the second half.

“With Travis’ (Etienne) success, everyone’s gunning for him, so whenever No. 9 is on that field they’re going to be honed in on him and the run game,” Elliott said. “So it was good for Lyn-J to be able to come in there and he made a lot of plays last year towards the end of the game, so maybe some people didn’t pay attention, but he’s an explosive guy and all he needs is a crease. So it was really, really good for him in this situation to come in and spark us.”

Co-offensive coordinator Jeff Scott was pleased to see his team respond after a slow start in the first quarter.

Head coach Dabo Swinney said he felt like the offense controlled the game.

“Offensively, we left a little bit out there, but I thought that we controlled the game. We held the ball effectively,” Swinney said. “Our offensive line took over. I cannot say enough about those guys. Travis [Etienne] had a career-high in receiving yards, and Lyn-J [Dixon] was a spark for us. I’m really proud of them. That’s quite a 1-2 punch. [Tee] Higgins had another big day. [Justyn] Ross had a career-high in catches. [Trevor] Lawrence played the quarterback position extremely well today. He was gutsy, tough and showed a lot of great heart and leadership.”