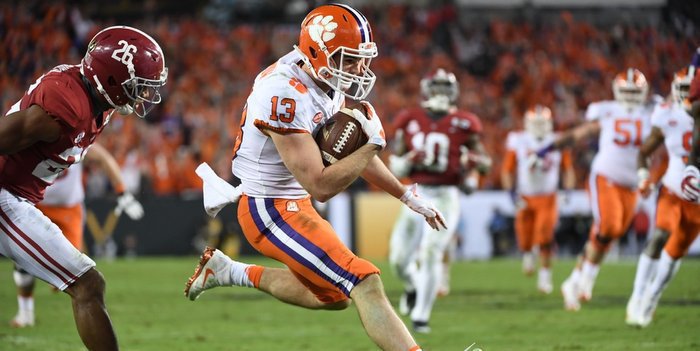 “I think there's no added pressure. You're playing on the biggest stage, with everything on the line,” Elliott said during Saturday’s media day at the SAP Center. “We want to get off to a fast start. That's our motto every single game. I don't think there's any added pressure other than we're playing for all of it, against a very, very, good defense. We have to do our job, which our job is to score points.

“I don't think the expectations change. For us 'best' is a standard at Clemson. Doesn't matter who we're playing. The motto is it's all about us. If we take care of ourselves, we don't care who we have to play, we feel like we're going to have a chance to compete in the end.”

When Clemson and Alabama met last year in the Sugar Bowl, the Tide defense kept the Tigers’ offense out of the end zone. This difference this year?

“Biggest thing is the explosiveness. Last year we had to manufacture a lot of drives,” Elliott said. “We were young at spots, didn't quite have the explosiveness in the pass and run game consistently. This year we've been able to be explosive. You have a quarterback that puts the ball where it needs to go. Backs that break tackles, have big runs. When you can be balanced, also be aggressive, both running and throwing the ball.”

However, Alabama’s defense is just as stout and dangerous.

“On paper, they're not as dominant on paper,” Elliott said with a laugh. “On film, they're very, very similar. I think ( DT Quinnen)Williams is a fantastic player. He's very disruptive, he's complete. He can do it all. He can two gap, penetrate, rush the passer, do it all from his position. (DT Isaiah) Buggs and (DL Raekwon) Davis are a year older. (LB Anfernee) Jennings is very experienced. LB Mack (Wilson) is running the show again, like he did last year. There's not a whole lot of difference. On paper, some people may see it. When you watch the film, they're very aggressive, very stout. If they get you in third-down situations, they can single you up, put pressure on your quarterback, play man coverage, challenge you to make plays.”

According to Elliott, the biggest challenge is stopping Williams – arguably the nation’s best player.

“Blocking No. 92, Williams, the rest of that defensive line. They're unbelievably long and strong. They got speed off the edge,” Elliott said. “The first thing is just handling the line of scrimmage. If you can handle the line of scrimmage, maybe you have a chance to get the ball in the air, make some plays on their secondary guys. They're very, very long at corner. (Deionte) Thompson, in my opinion, is the best safety in the country, his range, toughness in the run game. Xavier (McKinney) is an interchangeable guy. He plays strong safety, then on third down he comes in the box. He's a very good blitzer. They're a complete defense. We have to make sure we do a good job of establishing the line of scrimmage and our playmakers have to make plays.

And, once you get past Williams, there’s still not a weakness that Clemson can take advantage of.

“I don't know if there are any holes in this Alabama defense, Elliott said with a laugh. “As I said earlier, defensive line-wise, they're very, very stout. Got the best player in the country on the defensive line. Their linebackers are experienced. Dylan Moses is as good an athlete and tackler as you'll see in college football. Thompson is the best safety, in my opinion, in college football. Xavier roams around on the back end, gets in the box, rushes the passer. They have two 6'1" corners that can run, come up and challenge you, press coverage. The best thing for our guys is they know what they go up against in practice, they're battle tested. They were able to take a month off, pick up where they left off. That can't just be swagger.”