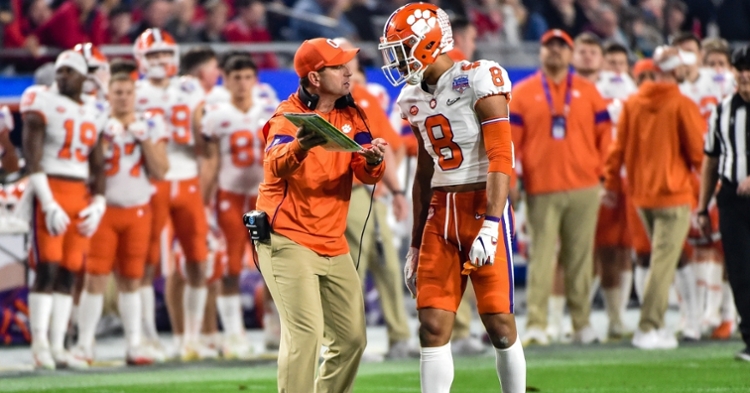 Sports Betting Dime (SBD) has released their proprietary strength-of-schedule rankings and it looks like Clemson is in for another year of getting lampooned by the national media for a weak schedule they have little control over.

SBD explains their formula as follows:

“The proprietary SBD Strength of Schedule formula is based upon their opponents’ efficiency ratings from last season minus the production lost from the 2019 team; recruiting rankings from the past four years; major transfers added and lost. The formula is then adjusted for each game based upon home and road games. As a point of reference, the toughest possible schedule would score 693.1, making Purdue’s SOS 37% of the hardest possible schedule, while second-ranked Georgia Tech’s is at 32%.”

The 14 ACC schools plus Notre Dame rank nationally as follows:

The four top-ranked schedules in the ACC all include Clemson as an opponent. Clemson obviously can’t play themselves and thus misses out on playing the only premier team in the ACC.

In conference play, the Tigers face six Atlantic division opponents and Georgia Tech and Virginia from the Coastal Division. Neither of those Coastal foes is projected to be in the upper portion in their division. The non-conference slate is headlined by Notre Dame, but is dragged down by Akron and the Citadel. The Zips are one of the worst Group of Five teams in the country and the Citadel is an FCS team.

The Palmetto Bowl against South Carolina completes the schedule, and while the Gamecocks are an SEC team, they’ve failed to be anything more than middle-of-the-pack since 2013 and do little to boost Clemson’s schedule. It’s quite likely - barring a FSU resurgence - Clemson could only play two quality opponents during the regular season: Louisville and Notre Dame.

There’s nothing Clemson can do about it except schedule tough teams out of conference and push for a football-first commissioner. The decision to sacrifice the seventh home game in 2021 to play Georgia at a neutral site (Charlotte) is a great example of Clemson doing everything they can. Clemson isn’t at fault here but be ready for the criticism anyway. It is coming.

Syracuse’s schedule is even worse. While it benefits from having Clemson on it, they get Georgia Tech and Pittsburgh from the Coastal and then play just one Power 5 non-conference opponent - Rutgers. The other three non-conference opponents are: Colgate, Western Michigan, and Liberty. Syracuse is last among all Power 5 teams in SBD’s strength-of-schedule rankings.

On the flip side, Georgia Tech has an extremely difficult schedule. In addition to playing in the deeper Coastal division, the Yellow Jackets get Clemson and Syracuse from the Atlantic and play one of the toughest non-conference schedules in America: Gardner-Webb, UCF, Notre Dame, Georgia.