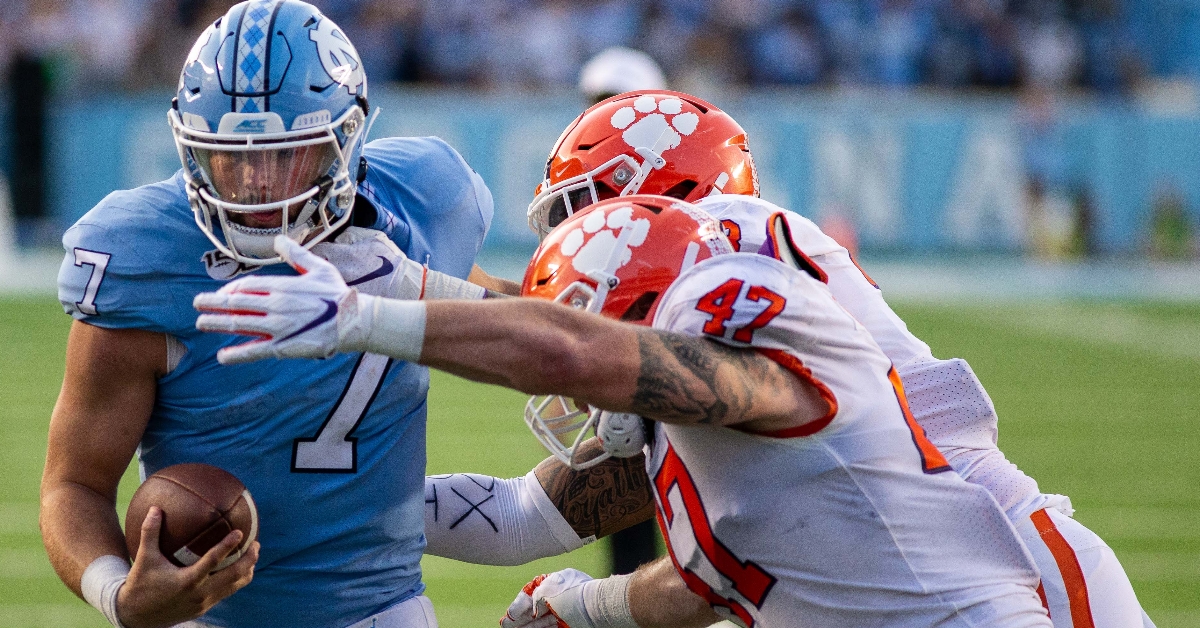 Skalski (47) makes the tackle at UNC

CLEMSON – Trying to cheat the game will get you beat.

Clemson linebacker James Skalski met with the media Monday morning to look back at Clemson’s 21-20 victory over North Carolina nine days ago and look ahead to this week’s game against Florida State Skalski said the Tigers, who had to hold off a late Tar Heel charge to win the game, learned a lot from the experience of winning a close game on the road.

“I think it was good for this team. We obviously came off of a nail-biter but it was an opportunity for us to reflect and grow and really self-critique offensively and defensively and just heal up for this stretch we have coming” Skalski said. “We got to go serve on a day of community service and that's always good for the soul. That's something Coach (Dabo) Swinney does a really good job on.”

Many in the media and even portions of the fan base have criticized the Tigers for not blowing out UNC, but Skalski said doing that fails to give credit to the Heels.

“You can't really listen to all of that. You have to give a lot of credit to North Carolina,” he said. “They played a hell of a game. I thought they out-played us on that day. I hope we get a chance to see them again because I think they're a team that could definitely make it to the ACC Championship and we can too, but we still have tests in front of us.”

Skalski said he thinks the Tigers lost focus in the week leading up to the game, and the one-point win shows the entire team that you can’t cheat the game.

“I didn't think we played well at all and it showed. I didn't think we had a great week of practice leading to North Carolina and it showed, too,” Skalski said. “It's just something we have to grow from and learn from. I just think we lost a little bit of focus. We're a younger team and I think that has something to do with it, too. When you have a game that close, and you look back on it and reflect on how you prepared, it's definitely eye-opening. It just shows that you can't cheat this game and you have to take every week seriously and really prepare to the fullest. Not making the plays you should make. Not making the layups, you could say. That's something we pride ourselves on is doing your job and making the layups.”

What did he see in practice that week?

“There were definitely times where you're like, 'Dang, I wish I had that rep back,' and it adds up,” Skalski said. “It shows when it's time to prove yourself.”

Where does the defense need to improve?

“I think the run game. We've done a great job so far but we have to get our nose bloody every down,” Skalski said. “We've got to be physical every down and I think that's something North Carolina did to us a little bit. They punched us in the mouth and we have to respond when that happens. It's a mentality. You have to attack each rep and each play like it's your last. That's just something that every defense has to bring.”

As for the national media, Skalski said the Tigers simply have to focus on Clemson.

“I don't think anyone wants to see little ol' Clemson dominating like we have. We just have to keep doing us, keep believing and working and everything will play out like it should,” he said.

He was then asked if they believe they are underdogs, and he said, “No, but we know what we've got. We've got a chip on our shoulder for sure. I think we really believe in what we've got and what we can do.”

#Clemson LB James Skalski says the Tigers are no underdog but they will play with a chip on their shoulder moving forward.