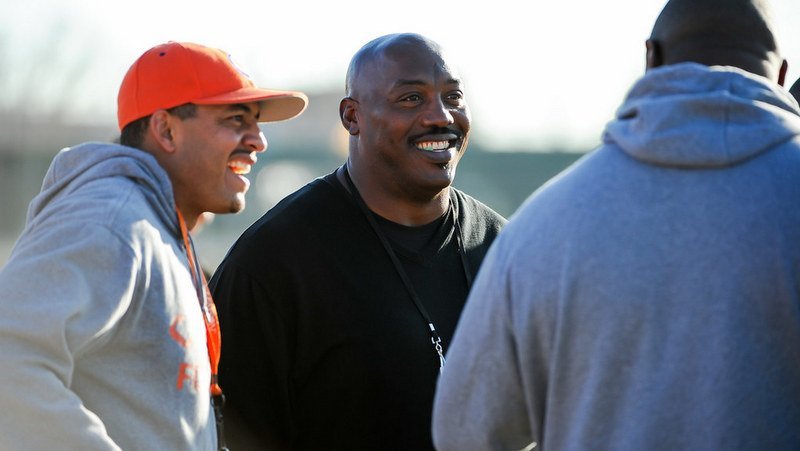 Clemson legend Levon Kirkland is making his mark off the field these days, and a recent letter he wrote has gone viral.

Back in January, Kirkland was hired to act as the Vice President of Development for the South Carolina football Hall of Fame (SCFHOF), and assist the Greenville-based non-profit, with the development of its Museum and Leadership Center (“MLC”) and Community Programs.

“This is a great spot for me,” Kirkland told TigerNet. “At one time, we were more just ceremonial and now I am out in the community raising awareness for all of the programs we have. Being able to help young people is something I’ve always wanted to do, and this lets me do it.”

In the days leading up to the 2019 NFL Draft, Kirkland reminisced about his own experience in the draft and decided to put his feelings into words.

Here is his letter:

I’m not sure if you remember me, but I can never forget you. My name is Levon Kirkland and I was your #38 pick on April 26, 1992. In those days, you were only in your seventies and there were only 28 teams, a simpler time. I remember anxiously waiting to hear my name announced that day. My dream since I was 11 years old was to be a member of your exclusive league. All the visualization, the roadblocks, the pretending, the ups, the downs, the major breakthroughs, the redshirt year, the blood, the sweat, that first start, the first article, the first All-ACC selection, the Gator Bowl MVP, the Consensus All-American, the final game at Death Valley, the last bowl game, the Senior Bowl, the Combines, the interviews, the meetings with the different teams, and now I was at the end of this journey.

Knowing that you had my future in your hands with countless other collegiate football players. The odds of hearing my name was always a risky venture. I saw how you broke hearts in my own dorm room, but I saw the joy you brought to the fortunate few; how you brought mothers to tears of joy, and how fathers swelled with pride. You were wonderful and cruel at the same time. I always had naïve faith when it came to my abilities to play football and I knew that my dream was going to come true but when it would happen was certainly the mystery.

Finally, April 26th, 1992 that faithful day, the day that was going to change my world. You couldn’t have picked a better day as far as the weather. It was around 70 degrees, not a cloud in the sky and perfect driving weather. I arrived at my sister, Barbara’s home about noon. I had even instructed her to get a second line on her phone a couple of days earlier. Of course, being my older sister, she gave me an ear full, but she did get a second line (call waiting for those who remember). I love you, Barbara.

I had so many questions that day. Would I have a chance to become a starter? Would I like the coaching staff and the ownership? Would I like my teammates? What city would be my next home? My heart was pounding, my hands were sweating, and for some strange reason, I didn’t want to talk to anyone. I looked to my right and I can see the same anticipation on my siblings faces especially my older brother. The Pittsburgh Steelers are on the clock and have the next selections. The team that I wanted to play for doing this whole process. I went to my sister’s restroom because I had to do something besides looking at you on television. “The Steelers are going to pick me,” and I repeat it twice more because three times is a charm. The phone rang, it’s the Steelers and they want to talk to me, “OMG!”

I was losing all kinds of cool points as I responded, “this is Levon.” Charles Bailey, a former scout for the Steelers, gave me the sweetest news, that a small-town boy could ever hear, “Welcome to the Black and Gold.” My energy level rose immediately, and I was on Cloud Nine. I was right all along to pursue this dream. I was in your league. My life had changed forever. Wait! What happens after this moment?

You did give us a little bit of a honeymoon period but not a long one. The NFL has changed the format over the years as it relates to the off-season, rookie camp, and mini-camps. I know that there are different phrases to the offseason and that the NFL doesn’t allow much contact or team activities during those periods. My experience was different, very different. I remember reporting to Pittsburgh, about four days after you had finished.

We went directly to work and had a brief mini-camp with the veteran players. The Steelers had just hired a new coach, Bill Cowher, and if you had a new head coach, that team could have extra practice time. Lucky me! I had never seen so many good players on one field in my life. The obvious thing was the speed, even the offensive linemen were fast. I recall saying to myself. “this is the real deal; would I be able to make this team.” My abilities and my football IQ eventually joined forces and I was able to have an eleven-year career in football. This isn’t the norm and the average football career only last about 3 years.

The more things change the more they remain the same. Your humble beginning in 1936 is certainly different than today. You have evolved from closed door meetings where older men picked from a rookie pool of players. Chet Simmons, ESPN president, convinced you to open your doors to the world and now your viewership has exploded. You have become a combination of Fashion Week, Reality television, and soap opera dramatics. A main event beyond other main event. The cream of the crops. The King of Sports Drama.

On April 25, 2019, there will be another #38 just like myself. I’m curious to know him. If I could give him some advice, I would tell him that you’re only the beginning of his NFL journey. That he has a long road ahead, and he needs to take advantage of this opportunity. I pray for him to have a wonderful career and if he ever wants to talk it out, I’m here for him. Good luck, #38 and Godspeed.

For the record, the 38th overall pick this year was OT Cody Ford out of Oklahoma, who was picked by the Buffalo Bills.