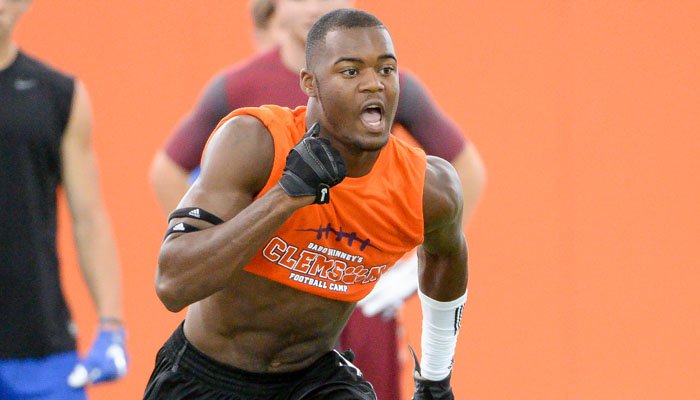 The camp started a little late because of the walk-up traffic, but there was plenty of talent on hand.

Brent Venables
Def. Coordinator / Linebackers
View Full Profile . The younger Venables was one of the standouts at Oklahoma’s camp a few days ago and worked out for his father this morning.

Venables won the starting outside linebacker for the Lions job last fall and finished with 46 tackles, 15 pass break-ups, two forced fumbles and a fumble recovery. At 6-1 and 185 pounds the rising sophomore still has room to develop and grow, and on Tuesday he showed good hands and has – as you would expect – a lot of the technique down pat.

He has said he also plans to camp at Baylor, N.C. State, North Carolina and Texas Tech.

*I was excited about the prospect of watching 2018 Tampa (FL) Sickles athlete Jordan McCloud work out this morning, but McCloud showed up at camp on crutches. McCloud is the younger brother of Clemson signee Ray-Ray McCloud, and he was with a large group of athletes from the Tampa area that made the trip with Unsigned Preps.

McCloud was at another camp on Monday and didn’t get to warm up properly and strained his hamstring.

Green is interesting – he is the former teammate of 2015 Clemson signee Deon Cain, and he worked out with offensive coordinator/wide receivers coach Jeff Scott

Green showed speed and explosiveness, but what I liked best about him was how he got in and out of his cuts without missing a step. He caught everything thrown his way during the session I watched, and it will be interesting to see if a Clemson offer follows. Also back out with the receivers was 2017 prospect OrTre Smith, who we talked about yesterday.

Smith’s mother played volleyball at Clemson and he is also seeking a Clemson offer.

* Florence (SC) Wilson defensive end Xavier Thomas (6-3, 235) is a rising sophomore who might have just been the best freshman player in the nation last season. Thomas spent a good amount of time with Venables prior to the session and seemed to have bonded with ends coach Marion Hobby

Thomas just doesn’t look like many rising sophomores – he looks like he could play now – and jumped out at me despite working out in a group of older players. He is not only quick, he’s powerful and I knew every time he hit the blocking sled because he flat out moved it. He already has offers from Florida St. Georgia, Nebraska and Tennessee. As a freshman, he registered 59 tackles and eight sacks in 10 games. Recruiter Danny Pearman

Danny Pearman
Assist. Head / ST / TE
View Full Profile stopped by earlier this spring. One thing to watch – one of the coaches watching the workouts told me Thomas grew up a Gamecocks fan and the whole family pulls for South Carolina. Can Clemson make inroads in camp?

*2017 Chapin (SC) tight end Will Register worked out with Danny Pearman and Durrel Barry in the “A” group of tight ends this morning, a group that included Clemson commit J.C. Chalk

View Full Profile . Register is already a solid 6-4, 241 pounds but showed good lateral movement and hands during the workout. He is drawing interest from Clemson, South Carolina and Tennessee.

*Speaking of defensive ends – we also got a chance to watch 2018 Anderson (SC) Hanna defensive end Stephon Wynn again this morning. Wynn is the son of Stephon Wynn Sr., who played tight end at Clemson from 1990-94 and is already drawing interest from Clemson’s coaches. He spent time in Hobby’s group and continued to impress. Clemson is obviously Wynn’s favorite school and he will be on campus through Wednesday.