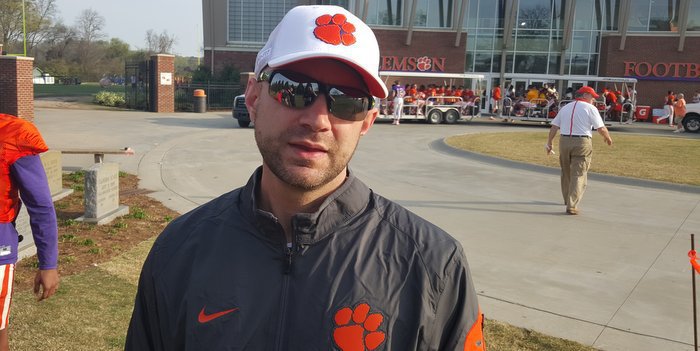 CLEMSON – Growing up a Clemson fan, Kyle Richardson often drove across the Highway 93 bridge towards Death Valley for any and all football basketball games, but when he crossed that bridge late last week and saw Clemson’s iconic Memorial Stadium in the distance, he realized he was no longer just a fan, he was a Clemson football coach.

The former Rock Hill (SC) Northwestern head coach left the hospital as a newborn with a tiger paw on his chest and now he’ll wear one as a member of Clemson’s coaching staff, a lifelong dream he wasn’t sure would ever come true.

Richardson told TigerNet last Friday that he’s been around Clemson’s program for quite a while - as a guest instructor for Swinney’s high school camps and as an interested observer - but the opportunity to become Clemson’s senior offensive assistant came completely out of the blue.

“I come to practices a lot. We had four or five players that were playing here and obviously I told Coach Swinney that one day I wanted to work for him and that was years ago,” Richardson told TigerNet after practice last week. “I've always stayed in touch with him and Jeff Scott. I'm really good friends with Jeff Scott, but I was getting ready for hopefully another run at Northwestern. We had a lot of guys coming back, and two weeks ago I got a phone call out of the blue and at that point, I jumped on the opportunity.”

The Appalachian State alum grew up in Clemson and said both of his children followed their father’s legacy by leaving the hospital with orange and purple on, much the chagrin of a Louisiana hospital staff.

“All of my family is originally from Clemson. My mom lives in North Carolina, but the rest of my family lives here in Clemson and Seneca, so when I came home [from the hospital] I had a tiger paw,” Richardson said. “Funny story, I was coaching college ball in Louisiana, and my oldest daughter was born, and they told us to get her ready to go home. We put her in an all-orange onesie with tiger paws all over it, and the nurse came in and said, 'Whoa, whoa, Y'all can't be like that in here because Y'all have the wrong type of tiger on. You're supposed to be in purple and gold and LSU.' I said, 'No, no, no. We're in orange and purple.' Both of my kids came home with tiger paws on them and now they're going to put tiger paws on them on Saturdays."

So the decision to join Swinney’s staff was one that took less than 60 seconds, however, Richardson knows his hardest work is ahead of him.

“I'm not going to say I haven't dreamed about it, but I never really thought that this day would happen,” he said. “As a kid, you're coming over here to the Valley and watching football games and coming to Littlejohn watching basketball. I did dream of one day putting the tiger paw on for real and not just for playing in the backyard.”

The reality of the situation is still very much a dream, but Richardson is ready to help Clemson take the next step towards a national championship.

“I drove across that bridge past the YMCA and saw Death Valley in the background, and I told Coach Swinney on my first day, 'I'm usually showing up as a fan, so when I crossed that bridge and saw the Valley, I was like man, this is real. I'm going there for a job,’” he said. “It's a dream come true, but at the same time, I'm ready to work and do whatever they need me to do to keep this thing going.”