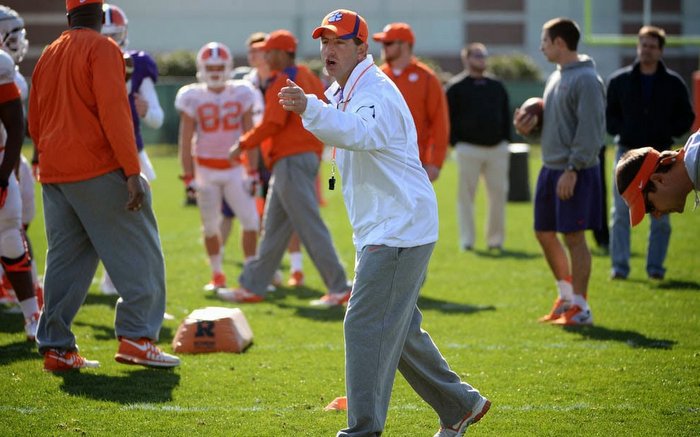 Swinney has the Tigers pointed in the right direction

Last Saturday marked eight weeks until Clemson’s season opener against Wofford, leaving many fans stuck in the summer doldrums, but this week marks the beginning of college football for many coaches, players and media as conference and team media days spring up across the country.

Dabo Swinney
Head Coach
View Full Profile ’s annual media golf outing at The Reserve at Keowee in Sunset. Swinney will have a brief statement at noon and will have a more in-depth meeting at 7 p.m., with assistant coaches popping in for interview sessions starting at 10:30 a.m. and lasting into the afternoon.

D.J. Reader
Defensive Tackle (2012 - 2015)
#48 6-2, 325
Greensboro, NC
View Full Profile will join the other ACC coaches and players at the Pinehurst Resort in North Carolina for the annual ACC Football Kickoff.

That will be followed by the start of fall practice on August 4th, which is three weeks from tomorrow. Football is here.

Before we get too far ahead of ourselves, however, let’s take a look at Swinney’s media outing this week and what we will be watching. There are a lot of expectations for the Clemson program for the 2015 season, but there is also a lot of uncertainty. We might have some answers Wednesday.

Clemson’s starting kicker was suspended by Swinney back in June after it was learned he had been arrested for DUI and simple possession of cocaine. At the time of the suspension many assumed that Lakip would be kicked off the team – defensive end Ebenezer Ogundeko

Ebenezer Ogundeko
RS So. Defensive End
#1 6-3, 250
Brooklyn, NY
View Full Profile was dismissed after a fraud charge in May – but Swinney and the school have been quiet about Lakip’s standing since the original statement.

Swinney will be asked about Lakip’s status during the noon press conference, and while we don’t know for sure that a decision has been reached about a suspension or dismissal Swinney will certainly have an update.

Clemson’s offense should be dynamic this season, especially if superstar Deshaun Watson

Tyrone Crowder
RS So. Offensive Guard
#55 6-2, 330
Marston, NC
View Full Profile will be getting his first crack to be a full-time starter, Mac Lain gets his first real chance and freshman Mitch Hyatt

Robbie Caldwell
Assistant Coach / Offensive Line
View Full Profile to see if any other players will make the transition to tackle and what his plans are for getting Hyatt ready for the rigors of the season.

The days of sending Chandler Catanzaro

Bradley Pinion
Punter (2012 - 2014)
#92 6-6, 230
Concord, NC
View Full Profile to flip the field with a booming punt or boot kickoffs out of the end zone seem like a long time ago. The uncertainty surrounding Lakip and Pinion’s early departure to the NFL present plenty of questions for special teams coach Danny Pearman

We’ve seen Watson several times over the summer and he looks fantastic, but he told ESPN last week that he hasn’t been cleared to practice. That is probably just a formality, but we will try and find out when Watson will be fully cleared. If it’s not by the August 4th start of practice, should we be concerned?

The numbers that were put up by Clemson’s defense were incredible, but Brent Venables

Brent Venables
Def. Coordinator / Linebackers
View Full Profile not only lost some talented players from that squad, a lot of leadership also graduated. You have to feel good about the frontline starters – guys like Ben Boulware

Jayron Kearse
Jr. Safety
#20 6-4, 210
Fort Myers, FL
View Full Profile have played a lot of snaps – but the inexperienced depth is a concern. It will be interesting to sit down with Venables and pick his brain about how he plans to get the youngsters plenty of snaps in the first two games.

We saw a good portion of the freshman class during spring practice, but youngsters like Christian Wilkins

Deon Cain
Fr. Wide Receiver
# 6-1, 190
Tampa, FL
View Full Profile are all expected to compete for playing time this season. We will sit down with the position coaches to see what they’ve heard about those players during summer workouts and what their expectations are heading into fall camp.