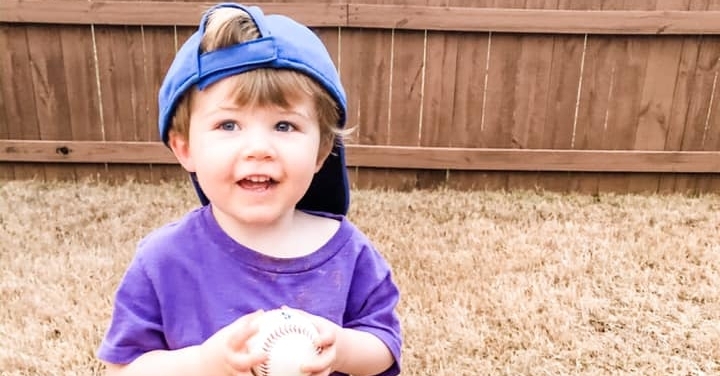 The Clemson football family and the Tiger family, in general, have wrapped their collective arms around one Upstate family whose two-year-old son is battling a rare form of cancer.

As Erin wrote on Facebook, the names of her sons have special meaning:

Long before I ever knew Clinton, I had the name “Cole” on my heart if God were to bless me with a son. Once we were pretty serious in our dating, he told me that being the 3rd, he’d really like to name a son after him to be the 4th. I obviously obliged with our precious Daniel, and then the Lord blessed me with another perfect boy that I named Cole Thomas.

A friend told me earlier this week that Cole biblically means “Victory”. I’ve learned a lot in the past 10 days and it’s that God doesn’t make mistakes and there are no coincidences.

During an early trip to the doctor, Cole’s pediatrician detected a heart murmur. The doctor referred the family to a pediatric cardiologist, who ordered an echocardiogram and EKG. The results showed that Cole had a coarctation (narrowing) of the aorta and wasn’t getting blood flow to his kidneys or legs. That was in June of 2018, and he had surgery in September of 2018 to correct the issue.

Since then, Cole – or Coley Bear as he is lovingly called – has grown into a beautiful toddler. With eyes that dance and smile when he looks at you and a head full of thick brown hair, Coley Bear is the kind of child that draws second and third looks when the Hendersons take him out in public.

Cole is also your typical, rambunctious, and active two-year-old. As Erin says, he can be “rough” so she wasn’t especially worried when she noticed that Cole had a black eye. Cole had been staying with his grandparents so his parents could work during the quarantine. No one could remember him falling, however, and when the bruise didn’t go away they rushed him to the pediatrician.

Blood work followed and Cole was admitted to the hospital. Scans on Friday showed that there was a mass in his sinus and a large tumor in his abdomen. He had surgery the following Monday for the biopsy of the tumor and mass, and the results showed that Cole had Stage 4 Neuroblastoma.

Neuroblastoma is a rare cancer that develops in the sympathetic nervous system, a network of nerves that carries messages from the brain throughout the body. About 700 children are diagnosed every year in the United States. Neuroblastoma is the cancer most often found in infants.

The news was delivered by the doctors along with a treatment plan – Cole will undergo chemotherapy over the next 18-24 months with the hopes of defeating the cancer.

The family was able to take Coley Bear home last week, but last Thursday he developed a fever and he was once again rushed to the hospital. He was placed in PICU (Pediatric Intensive Care Unit) while the doctors try to normalize his blood levels. He will likely be in PICU for a few more days and then will be moved to the pediatric oncology floor.

So what does all of this have to do with Clemson? Clinton and Erin are both Tigers, and if Coley Bear doesn’t exemplify the fighting spirit of the Tiger then I don’t know who does. Clinton sent me a text a few days ago, and little Cole was snuggled up under his daddy’s chin with the peaceful look of a child that knows he’s in good hands.

As the father of a child that age, I broke out in tears (as I have multiple times over the last few weeks as Nikki and I pray for our friends).

And the rest of the Clemson family has responded in the way you would expect. The family lives next door to Michael Spiers (the brother of Clemson pitcher Carson Spiers, cousin of punter Will Spiers) and Spiers enlisted head coach Dabo Swinney to send the family a few words of encouragement.

Once word got out, Will Spiers, Darien Rencher, BT Potter, KJ Henry, Will Swinney, James Edwards and Jake Edwards, James Skalski and Trevor Lawrence have all offered their support of Cole.

Friends of the family have also started a PayPal campaign to help the family defray expenses.

I know this isn’t a true football story, and I thank you for your time. If nothing else, please remember this sweet family and Coley Bear in your prayers and thoughts and best wishes. He has a long road to recovery, but if anybody can beat this it’s our little Tiger. He has been a fighter since birth.

I sent Clinton a text the other night – we were talking in the early morning hours – and I told him that when Cole kicks this in the butt, we are going to throw the biggest party you’ve ever seen.

It’s another party I can’t wait to be a part of. Keep fighting Coley Bear.