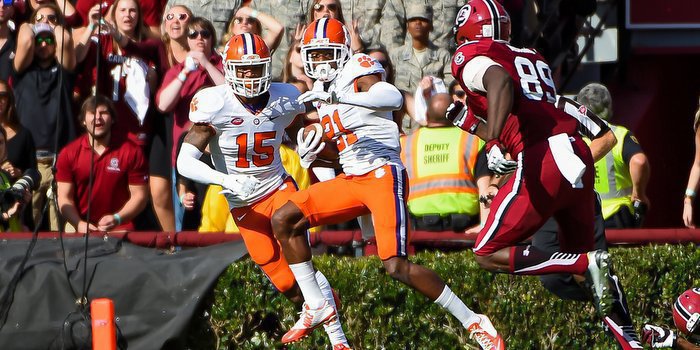 Baker had a big interception against South Carolina in 2015

During the 2015 season, he started and logged 34 snaps in win over Miami and posted three tackles. Baker nabbed his first career interception in the win over Florida State, and he played 42 snaps at South Carolina, with his second career interception. Both interceptions were in the redzone.

Baker told TigerNet during Clemson’s Fiesta Bowl media day that while he did miss playing, the injury allowed him to be home for the birth of his daughter (who lives in Baker’s home state of Florida) – a moment he wouldn’t want to miss for anything.

Baker had a big interception against South Carolina in 2015"

Baker will graduate from Clemson in May with a degree in English. He can transfer to a FBS school, but will have to choose a school that offers a Masters Degree program not offered at Clemson if he wants to play in 2017. Or, Baker could transfer to a FCS school and play immediately.

Baker said he feels like he’s nearing 100-percent and was excited to get back on the field for spring practice.