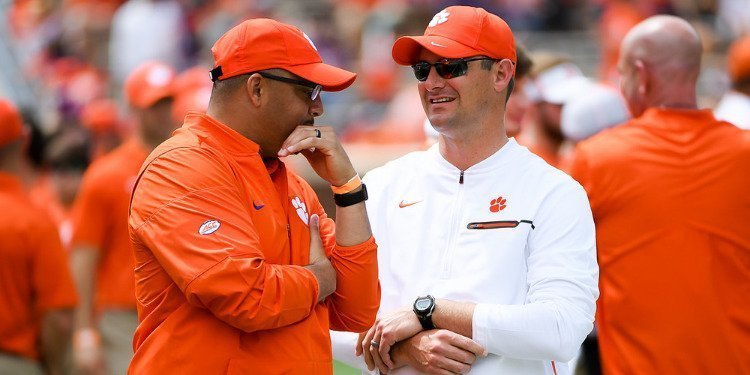 Scott made $851,500 last season in base salary and Elliott made $876,500 last season with his base package. The raises put Clemson number one nationally in total compensation for assistant coaches, with the total ascending to $7.395 million yearly.

"It was very important to Dabo as he went through and pulled all of this together, understanding the good work that they've done," Radakovich said Friday. "The fact that we've done a great job over the last few years of retaining the staff that's been here. There's been very little turnover and I think that helps with the culture and the environment inside the program and has helped create the outstanding results that we've had."

Clemson's Brent Venables was one of only two ACC assistants to top the million dollar mark last season (FSU's Harlon Barnett the other).

Venables is the only assistant without a raise in this cycle, after signing a new deal last July that was supposed to pay him an FBS assistant-leading $11.6 million over five years.

Radakovich said Venables contract is a little more complicated but they hope to have a deal in place before the next Board of Trustees meeting.

"Coach Venables is a little different because most of these have been add-ons of dollars to their existing packages. If you remember last year, we did Coach Venables' contract and there was a split dollar and life insurance component," Radakovich said. "He was out on the road recruiting during January. There's a desire to move forward and extend him back to five years but it will take a little longer to understand how that mix pulls together with that additional component. We'll try to get that done at the next board meeting."

Every other assistant had a year added to their contract and varying percentages in raise increases. Scott and Elliott saw a 17.6 percent increase in their yearly contract, while Todd Bates (25), Lemanski Hall (16.7), Mike Reed (12.5) and Brandon Streeter (9.9) were over or around the double-digit increase mark too.

Clemson trailed only Ohio State in total assistant salaries paid last year, doling out $6.825 million to the Buckeyes' $7.383 million, but Clemson's salary bump plus changes in staff with Ohio State gives Clemson the edge now there.

With the salary raises, Radakovich said Clemson will be at or near the top of college football.

"I think we're at the top or near the top. I think there are universities who are doing their compensation at the same time we are. Given the results on the field, I think that's the neighborhood we should be," he said.

With the assistant coaches' raises completed, Radakovich will now turn his attention to Swinney's contract.

"We've had some discussions with his representatives but as always it was very important for Coach Swinney to get the staff and everybody pulled together. Now, we'll turn our attention to his contract," Radakovich said.