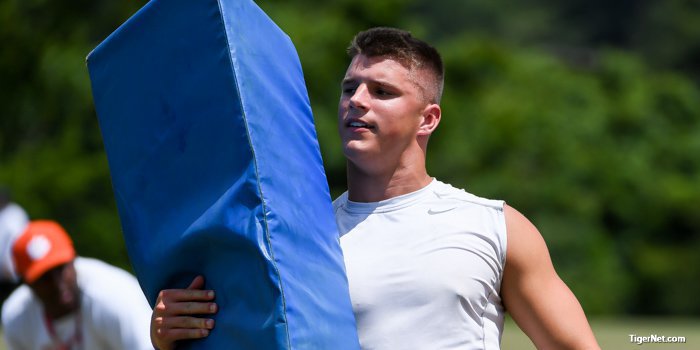 Logan Rudolph, the 2017 Clemson linebacker/defensive end commit who tore his labrum during Northwestern (S.C.) High School's 42-28 victory over Dorman last month, is on the mend.

The 6-foot-4, 230-pound defender from Rock Hill told TigerNet via text message Tuesday morning that he is optimistic about his recovery from season-ending surgery.

“Recovery is going great,” Rudolph texted. “I had surgery last Wednesday and have no pain in my shoulder at all. (I) started back lifting legs and right arm exercises yesterday.”

Rudolph – who in 2015 accounted for 60 total tackles, 14.5 sacks, an interception and four forced fumbles – is still on track to graduate in December and enroll in January at Clemson, where he plans to major in business or business marketing.

“(I'll) begin shoulder rehabilitations this afternoon, will be back quickly,” he texted.

The labrum is a piece of fibrocartilage attached to the rim of the shoulder socket that helps keep the ball of the joint in place, according to Johns Hopkins Medicine. A labral tear occurs when this cartilage is torn.

Rudolph also has played tight end for the Trojans, catching 50 passes for 502 yards and three scores during his junior season. He is the younger brother of Oklahoma State quarterback Mason Rudolph, and his former Northwestern head football coach Kyle Richardson is now a coach at Clemson.

Rudolph famously committed to Clemson with a viral video that showed him chopping wood in jean shorts, to the tune of Kenny Rogers' “Danger Zone.” He told TigerNet this summer that Clemson's “family feel” and proximity to home were the two main factors behind his commitment.

“I really liked the family feel at Clemson,” Rudolph said in June. “I think the coaches there are true to their word and are really good guys – guys I think I'll enjoy being around for four years of my life. And obviously the proximity to home is second to none, and it couldn't be a better situation, just convenience-wise, as far as getting to and from school.