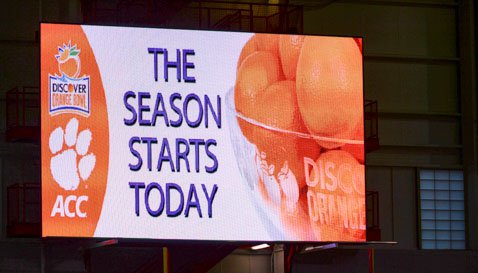 Video board inside the indoor practice facility on Saturday.

CLEMSON - Clemson returned to practice in full gear on Saturday as it prepares for the 2014 Discover Orange Bowl game against sixth-ranked Ohio State. The Tigers had a light workout in shorts on Friday, but were dressed in full uniform on Saturday.

The Tigers worked for over two hours in the indoor practice facility while a steady rain poured outside for the entire length of the practice.

“We had a good workout, “said Head Coach Dabo Swinney

Dabo Swinney
Head Coach
View Full Profile . “The guys have not practiced in a couple of weeks, but I saw some good work out there. The practice got better as we went along.”

The Tigers are allowed 15 practices in preparation for the Discover Orange Bowl. Clemson will work Monday through Thursday next week, take Friday off for a community service project, then have a final pre-Christmas practice on Saturday, December 21.

“We will work a lot on fundamentals, work on preparation for Ohio State, and work with the young players who have not played this year.” Each practice there will be a post-practice 10 minute workout for the red-shirts and other young players on the roster.

Swinney made a few comments about Ohio State after practice. “Ohio State has an outstanding quarterback in Braxton Miller. He has rushed for over 1000 yards. He is a quarterback who can run like a running back and that will be a challenge. But we will have a good plan. I am also impressed with their very physical running back, Carlos Hyde.

“Ohio State is fourth in the nation in rushing. They do what they do and they have been very successful with it. They have won 24 of their last 25 games. They also have a strong defensive line and have done a good job stopping the run.

“We are playing Ohio State, what a great opportunity to go against the best. I think this will be one of the most highly anticipated games of the bowl season.”

Clemson will be without the services of Gif Timothy for the bowl game and going forward. The red-shirt junior offensive tackle has decided to retire from football. “I had a talk with Gif on Friday and his knee is just too painful. It has been a frustrating year for him because he just can’t perform at the level he is accustomed to.

“What a great young man. Gif Timothy never complained and he gave every ounce he had to be the best he can be. He will stay on with us as a student coach and will be a good example to the young offensive linemen we have on this team.”