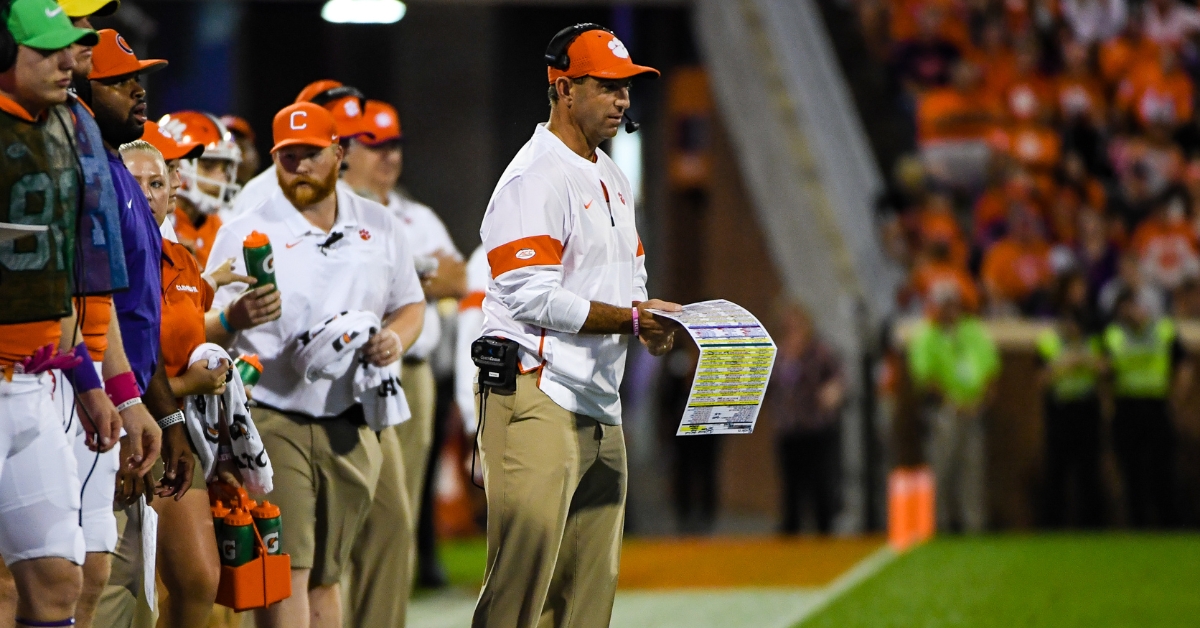 Dabo Swinney is a master motivator.

As the rest of college football will soon learn, these Tigers have long memories.

Quarterback Trevor Lawrence stood in the interview area after the win over Wofford last week and was asked if the criticisms of him and the offense seemed like a million years ago. After all, the Tigers are steamrolling the competition, Lawrence has gone eleven quarters without an interception and the offense is playing at the highest level it has all season.

Hey Trevor, do the slights seem like a million years ago?

“No, we remember it like it was yesterday,” Lawrence said, cutting his eyes to the questioner. “We use that stuff as fuel.”

Then he softened his stance.

The rankings show the committee is trying to create drama ahead of this week’s games – Penn State plays at undefeated Minnesota and LSU travels to Tuscaloosa to take on Alabama. Two Big Ten teams. Two SEC teams. See where are we going with this?

Meanwhile, Clemson heads up I-85 to take on NC State this weekend, and if Wolfpack head coach Dave Doeren was watching the show I can only imagine that he threw everything from towels to laptops at the television.

The case of Penn State is interesting – the committee mentioned that the Nittany Lions are in because of impressive wins over Iowa and Michigan (both of those teams, according to my eye test, are boringly average and just bad on offense). Rob Mullens, the committee chair, said that one of the reasons Penn State was ahead of Clemson was because the Nittany Lions have held seven of their eight opponents under 13 points.

Clemson has held eight of nine under 14 points and has held every opponent under 300 yards of total offense.

And if you’re going off resume, then Penn State should have been ahead of Alabama. Yet there is Alabama in the No. 3 spot, having beaten nobody to date, but they’ve been dominant in all their wins.

As for Clemson, the Tigers are being penalized for a one-point win at UNC in late September. That’s all anyone wants to talk about. We were driving home after the win at Louisville and one national radio host opined that Clemson was just like Florida State of 2014 – winning games by luck and barely slipping by and, “they can’t keep doing that every week.”

The Tigers’ average margin of victory is 32.6 points. Their offense ranks third nationally; their defense ranks fourth. Yeah, those struggles every week can be painful.

However, none of it matters. Not now anyway.

That’s what he says in public. In private, however, these Tigers have a long memory.