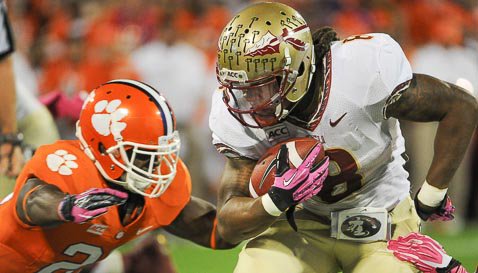 This is Clemson’s chance to erase the memory of last year’s trouncing in Death Valley. It’s a chance for national recognition. It’s the inside track to the ACC Atlantic Division title and a berth in the ACC Championship Game. It’s about respect and the rankings. It’s Clemson and it’s FSU in Doak Campbell, with the horse and the spear and a quarterback sitting out for the 'Noles.

In short, it should be fun.

*Distractions, distractions and more distractions -The news came out earlier this week that Winston would be suspended for the first half, and the news broke late Friday night that he was suspended for the entire game. The circus that surrounds the talented signal caller has to take a toll, right? The fact that he was suspended on Wednesday also means that backup quarterback Sean Maguire only gets two days with the number one offense. Add in the fact that ESPN’s GameDay is going to be in Tallahassee and there will an entire day for the Seminole hype machine to be in full force, and the Tigers just might be able to sneak up and grab a victory.

*Embrace the underdog role -Before Winston’s suspension, the oddsmakers had the Tigers as 20-plus point underdogs. In case you’re wondering how that compares – South Carolina is favored by about the same margin over a horrifically bad Vanderbilt team. Yes Clemson, you are now Vanderbilt in the eyes of the oddsmakers. A bad fourth quarter at Georgia and the fact that the Seminoles have a bevy of NFL talent across the board have the national media and oddsmakers calling this a rout. However, Clemson has seemingly played well as the underdog, and the players and coaches showed during interviews this week that they are taking this one to heart. Could they ride the underdog role all the way?

*Clemson’s defense is better than it showed at Georgia -Both teams have played a school from a Power Five conference and both schools have played a Football Championship Series School from South Carolina. Clemson is sixth in total defense, FSU is 40th. Clemson head coach Dabo Swinney

Dabo Swinney
Head Coach
View Full Profile told us Wednesday night that he thinks Florida St. is missing great players like Lamarcus Joyner and Tim Jernigan. He even said that Joyner was dynamic and could make plays all over the field – we saw that in the first quarter in Death Valley last season. Even though you’re replacing 5-star guys with 5-star guys, sometimes it takes time to get situated and find everyone a role. Clemson is still mixing and matching in the secondary, but up front the Tigers are set with experienced guys. Guys who have something to prove after the Georgia debacle.

*Florida St.’s hype is based off of last season, not this season -Unlike early last season when the Noles were blowing everybody out of the water, they’ve managed to beat a good – not great – Oklahoma St. team and The Citadel. They don’t look as impressive as they did last season, and it could be the fact that some of those players they are missing right now were the real difference makers last season.

Talent - Let’s face it, they will have the most talented team on the field Saturday night, and they have a lot of players that ran the table last season and won a national championship. It’s hard to lose home games when you have that much talent across the board, and it’s talent that is used to winning. Maguire – Winston’s backup in this game and the guy that will get the first half snaps – was a 4-star coming out of high school. They have players all over the field that Clemson recruited heavily – Dalvin Cook and Ronald Darby come to mind – and they have the kind of talent that translates to the next level.

Special teams and turnovers - Two years ago in Tallahassee, the Tigers jumped out to the two touchdown lead before the ‘Noles made a furious comeback, a comeback that was fueled by disastrous special teams play on the part of the Tigers. The Tigers allowed a 90-yard kickoff return by Joyner and special teams mistakes – including failing to kick off into the back of the end zone – hurt the Tigers in the game. Two years later, Clemson still hasn’t found answers at punt return and kickoff return and allowed Todd Gurley to flip the momentum at Georgia with a 100-yard return for a score. The Seminoles also have a solid go-to guy in sophomore Roberto Aguayo, who is 27-of-28 for his career in field goals and has hit all 102 of his extra point attempts. That means he has hit 129 out of 130 kicks – astounding.

The Tigers are going to keep this one close, and they are going to cover the point spread. Heck, the Tigers are probably even going to grab a lead at some point Saturday night and there will be tremors of anticipation in Clemson nation as the fans wonder if the Tigers can knock off number one.

What I don’t like are the special teams matchups, the home field advantage for FSU and the fact that Clemson's defense hasn't played a superlative game against a big-time opponent in a long time. This is also the type of game where Clemson turns it over too much and special teams mistakes provide the final dagger.

If the Tigers are to pull off the upset – and they can – they have to start fast, make Florida St. kick field goals in the red zone, win the turnover battle and run the football. Clemson won’t win this game by throwing for 400 yards – they have to control the tempo and the momentum with the running game. If they can’t, they come out on the losing end. I’m not sold that Clemson will stick with the run even if it is successful.