It looks like you are using an ad-blocker. You may not have realized, but our team is mostly supported by ad revenue. TigerNet has provided free Clemson sports news for over 25 years. Help us keep doing that by turning off your ad blocker or joining our ad-free membership level. Thank you!
Go Ad-Free! Continue browsing TigerNet with your adblocker active with a monthly or annual Orange Level membership.
Allow sponsors to pay for your browsing Disable your adblocker on TigerNet and ads will fund your browsing.
Already an Orange Level member? Please Login | Need help? Contact support
BREAKING
Clemson intends for Death Valley to be full this fall 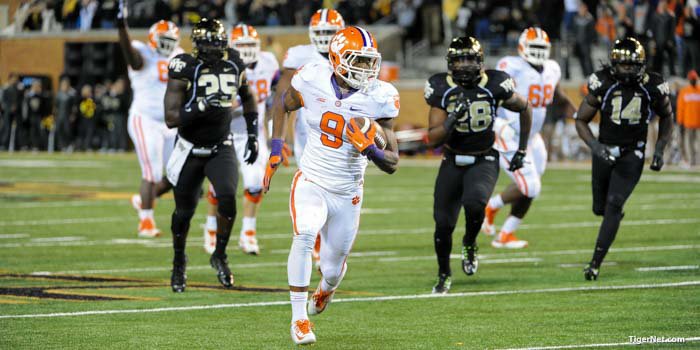 Clemson looks to join the 700-win club Saturday as it takes on Wake Forest.

Saturday is one last chance to see the nation’s top-ranked team at home. It’s the chance to send the seniors out in style, and it’s a chance to honor Clemson’s military heritage. It’s the last home game of the season, and the fans who will be in attendance will be treated to true football weather, with a high near 60 on a sun-splashed November afternoon. Miss out, and it’s another 293 days until Clemson takes the field at home again.

The Tigers are 10-0 and close out the home portion of the season and the ACC regular season at 3:30 p.m. against Wake Forest Saturday afternoon.

Wake gave Notre Dame a fight last week - the Demon Deacons had 23 first downs to 15 for the Fighting Irish, 340 yards to 282 yards in total offense and had the ball for 11:36 longer than Notre Dame. The Irish won 28-7 anyway, getting a 98-yard touchdown run from Josh Adams, scoring twice on two trips into the red zone and adding another TD on a 28-yard interception return by Andrew Trumbetti. The Demon Deacons were 1 of 4 in the red zone.

* Clemson has won six in a row in the series, all under Head Coach Dabo Swinney, by a combined score of 231-81. The Tigers won last year by a 34-20 score at Winston-Salem on a Thursday night. Clemson scored two touchdowns in the fourth period to win a game that was 20-20 at one point in the fourth period.

* The proud military history of what we know as Clemson University really began in 1917, when the entire senior class of Clemson Agricultural College volunteered for service in World War I. A total of 1,549 Clemson cadets saw service in World War I, 25 of which died in battle. Two soldiers from Clemson received the Congressional Medal of Honor: Ensign Daniel Sullivan and Sergeant Erans Foster.

* World War II saw Clemson cadets answer the call to arms just as they had for World War I. Only Texas A&M and Army provided more Army officers for World War II than Clemson. A total of 6,475 Clemson alums faced battle in one theater or another, and 370 died in the name of freedom.

* Clemson can reach another first with a victory over Wake Forest. A triumph over the Demon Deacons would give Clemson an 8-0 record in the ACC, a first in Clemson history.

* Clemson looks to join the 700-win club Saturday as it takes on Wake Forest. Clemson has an all-time record of 699-455-45 since it started playing football on Halloween day, 1896. That is a .601 winning percentage. Clemson won its first game against Furman in Greenville by a 14-6 count and has run off 698 more wins since that first game.

* This senior class has a 42-7 overall record and with a win Saturday can set the school record for most wins in a four-year period. That would be some accomplishment in your final home game. In terms of winning percentage, this class has an .857 mark, best in school history. They will have to continue winning however to keep that record. The second best mark is a .844 mark by the seniors of 1984, a group that included William Perry. They finished 37-6-2.

Wake’s offense has been, in simple terms, not very good. The Demon Deacons are 112th nationally in total offense (339 ypg), 119th in scoring offense (17.5 ppg), 121st in rushing offense (a paltry 111.10 yards per game) and 59th in passing offense at 228 yards per game. Sophomore quarterback John Wolford will split time with freshman Kendall Hinton on Saturday, but the two quarterback system really isn’t working. Wolford has thrown nine interceptions against just seven touchdowns and is averaging just 1.4 yards per rush. Hinton is more of a threat to make plays with his feet, and if you watched Clemson’s defense whiff repeatedly against Syracuse last week it makes you think that Hinton might be the better option. Hinton is second on the team in rushing (339 yards) and owns a team-high six rushing touchdowns. He's also completed 51.7-percent of his throws with a 3-to-5 TD-to-INT ratio and 907 yards. Freshman running back Tyler Bel has rushed for 346 yards (3.4 AVG).

Wake has five receivers with at least 300 yards receiving, and tight end Cam Sergine (40-421 yards, 3 TD) is the biggest target. Cortez Lewis has 38 receptions for 498 yards. Will the Deacons go with their strength and try to attack the Tigers through the air, or will they go after Clemson’s recent weakness of surrendering large chunks of yards on the ground? If the Deacons decide to live through the air, they will have to protect the quarterback, something they haven’t done all season. The Deacs are 122nd nationally (out of 126 teams) in sacks allowed, giving up a whopping 34 over 10 games.

Clemson’s game plan will be to shut down the run, and get to the quarterback. The same as every week.

Clemson is battling the injury bug on offense. Wayne Gallman rolled his ankle last week and is officially listed as questionable. Right guard Tyrone Crowder and wide receiver Ray-Ray McCloud are out, and right tackle Joe Gore won’t start because of personal issues. Gallman cracked the thousand-yard mark last week and leads the team in rushing (1,043 yards) and rushing touchdowns (9). Backup Zac Brooks will be playing his last game in Death Valley and should get the bulk of the carries if Gallman can’t go. However – it would be nice to see Tyshon Dye get a look after playing sparingly this season.

Quarterback Deshaun Watson has inserted himself firmly into the Heisman talk, and deservedly so. He’s got a chance to pass Steve Fuller for the third-best rushing mark for a quarterback in Clemson history Saturday (he needs 52 yards) and he accounted for over 400 yards of total offense last week.

Wake Forest is 23rd nationally in total defense, giving up 161 rushing yards a contest and 176.9 yards per game through the air. The Deacon defense is led by its linebacker – senior Brandon Chubb (85 tackles, 7.5 TFL) and senior Hunter Williams (50 tackles, 7 TFL, 2 sacks). The secondary is young (just one senior) and doesn’t excel in takeaways.

The Tigers might not light up the scoreboard like a lot of people expect, but shouldn’t have problems scoring more than enough points to win.

Let’s just go ahead and repeat the broken record – Clemson’s kickoff coverage teams remain a huge question mark and could implode at any time. The return teams aren’t much better.

Wake punter (and Auusie) Alex Kinal is averaging 43.8 yards per punt this season with 26 of his punts downed inside of the 20.He’s one of the best in the nation, but he’s also gotten a lot of practice and holds a rather dubious record – one of his punts last week against Notre Dame was the 393rd of his career, a NCAA record. He punted a whopping 95 times his freshman season. Kicker Mike Weaver is 11-of-17 on field goals with a long of 47 yards.

Grocery store kicker Greg Huegel is 18-of-20 on field goals with a long of 47 yards and is perfect in ACC play. Andy Teasdall isn’t averaging a big number on his punts, but 17 have been down inside the 20-yard line. Clemson still hasn’t gotten any kind of return game going.

One of my favorite scenes from the movie Gettysburg centers on Confederate General James Longstreet, who is thinking about the chances of success against the Union center on day three. He looks over and says, “It’s a mathematical equation” while describing what could happen and what it would take to succeed. Then reality hits him, and he realizes it’s just “mathematical after all.”

Wake could win. Wake could rise up and play great defense and find success against Clemson’s defense with a bruising ground game. But it’s Senior Day, the Tigers are number one, it’s Military Appreciation Day and the Tigers are just too talented.

Clemson intends for Death Valley to be full this fall