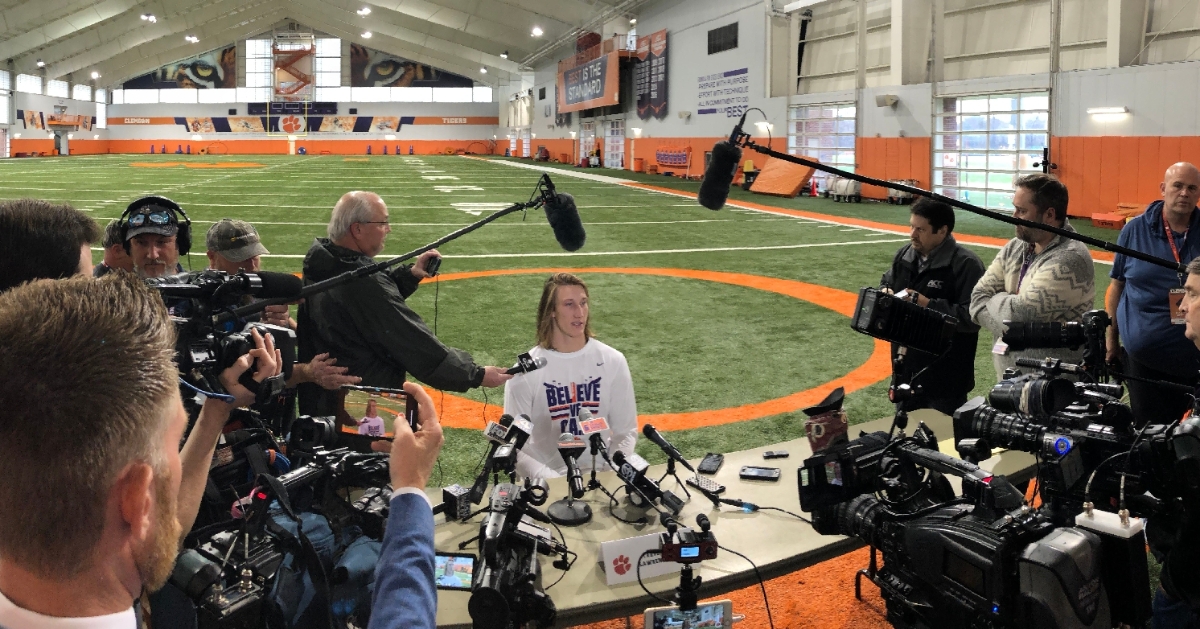 CLEMSON – Clemson held its Media Day ahead of next Monday’s National Championship game, and plenty of ground was covered as the 70-plus media in attendance asked about injuries, LSU’s offense, and the chance to make history.

We will start on the injury front.

Wide receivers Tee Higgins and Justyn Ross didn’t elaborate on their injuries suffered in the win over Ohio State in the Fiesta Bowl. Higgins told us he “just got banged up” and the doctors told him that if he rested for a bit he could go back in. Higgins was asked if it was a head injury or if he went through concussion protocol and he said no.

Ross said it was normal for this time of year and that he feels 100 percent.

"It is just regular football injuries. Just being hit and knocked around a little bit," Ross said.

Defensive tackle Nyles Pinckney was limping after the Fiesta Bowl and he said he needed the two weeks to heal, but should be good to go for the National Championship.

“I did, I got banged up a little bit. We’ve never had this long (two weeks) before the National Championship, but this has been great for us,” Pinckney said. “A lot of guys were banged up after that Ohio State game.”

Safety Tanner Muse said the 2020 early enrollees are on campus and are able to contribute in practice but he’s not sure that Brent Venables will give up scout team quarterback duties to D.J. Uiagalelei.

“I think they came in yesterday. I think they practice Tuesday and Thursday or something,” Muse said. “I don’t know if Coach V will give up the reigns, Jimmy Greenbeans has been slicing and dicing us all week. So, I doubt he’ll give us the reigns for it.”

Quarterback Trevor Lawrence is excited to have Uiagalelei on board.

“It’s going to be cool. It’s going to be awesome. He’s obviously a great player,” Lawrence said. “I am really excited for him to be here. I haven’t even seen him yet. He moved in yesterday. He will probably be in meetings today. I am excited to have him here. He’s obviously a great player and a good person to add to the QB room. It will be a lot of fun.”

*Linebacker James Skalski said he thinks playing against Ohio State in a fast, physical game will help prepare the Tigers for LSU.

Skalski said he played 81 snaps against the Buckeyes, but that Isaiah Simmons and K’Von Wallace each played all 89 snaps.

“That is just a testament to Coach (Joey) Batson and our strength and conditioning staff,” Skalski said. “I was ready for it. There were a few packages that we ran where I wasn’t on the field, but those other two guys were out there all game. It was different. I would have been out there for a few more snaps but Chad Smith and I ran into each other and drilled each other so I had to come out.”

*Smith said he will make sure all of the players know that they had their bowl game against Ohio State and did the “fun stuff” out in Arizona for the Fiesta Bowl. This trip is different.

*Defensive tackle Tyler Davis told us a few weeks ago that he was afraid of heights and hated to fly, so we asked him about the trip to Arizona and the long flight. He said the trip out there was long, but the trip back wasn’t an issue.

“I was just really tired. I got on the plane and I slept most of the way,” Davis said with a smile. “It wasn’t bad at all.”

*Defensive end Xavier Thomas was recruited by LSU – he never went there on a visit – but did take a phone call from Ed Orgeron.

“His voice is different, that is for sure,” Thomas said. “I wasn’t sure if it was for real or not when he first started talking. But he seems like a great guy.”

*Pinckney said they knew Trevor Lawrence could run, but they didn’t know he had moves until he broke down the Ohio State defender in the open field on his way to a 67-yard touchdown.

“We’ve seen him in practice,” he said. “He is faster than people think. But we didn’t know he could move like that. We saw that and started calling him Michael Vick, because he can do it all.”