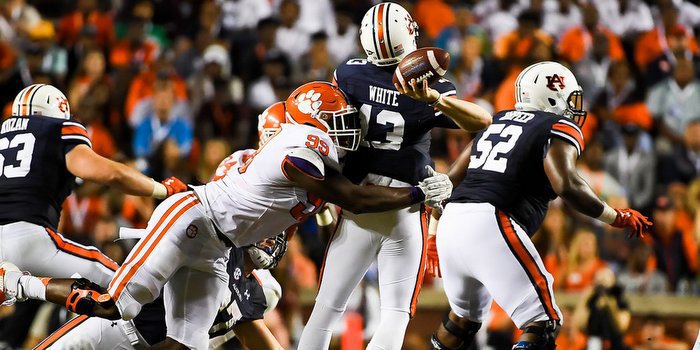 Clelin Ferrell learned a lot in his first college game Saturday night at Auburn, but the main thing he learned is to trust his coaches even more than he already did.

Ferrell made his first start in the win, while the Tigers showcased their young but talented new-look defensive line.

“I definitely learned that I can play at this level. And I would definitely say that the coaches really put us in a good position to win if we listen to what they tell us to do,” Ferrell said. “I didn’t understand this at first, but the coaches really know what they’re talking about, like Coach Venables. I didn’t understand he was that smart because, like he was just saying, ‘They’re gonna run this play; you need to be ready for it.’ And they ran that exact same play that we watched the film of a thousand times.

“I didn’t understand why he would be so on edge about it and just so much attention to detail and so intense and yelling at us about it. He said, ‘Yeah, first quarter, they’re going to try to come out and run some things,’ like they ran that little wing-T formation. But, throughout the game, they’re going to get back to what they know, which is their old schemes that they’ve been running from the past years, like they did with Cam Newton. It was really just buying into what the coaches said; that’s one thing that I really learned. They’re going to put us in the best position to have our best games out there.”

Ferrell played 60 snaps in the game and finished with three tackles, including a half a tackle for loss.

“You work so hard just for that one moment, and when it actually happens, it’s a time when I just had to just sit back and look at it like … and soak up the moment,” Ferrell said. “It was crazy. But I was ready to go. I worked hard for it. It wasn’t somewhere that the moment was too big for me because when you work so hard for something like that, it’s like you can’t fail at it.

So I feel like I did a good job, and I was excited for it.”

Ferrell also said he enjoyed the atmosphere at Auburn’s Jordan-Hare Stadium, and getting the win against an SEC opponent on the road at night should help the young Clemson defense, which has many new faces this season, grow up quickly.

“Definitely there was a bunch of butterflies. No worries; I definitely wasn’t scared,” Ferrell said. “As a group, we were definitely nervous because, ‘Hey, we’ve been working for this moment, and now it’s finally here.’ So it was, like, ‘It’s time to put on a show for them.’ So it was like, ‘Hey, we’re actually here.’ But once we got into the game, I felt like we did a very good job of putting ourselves in a great opportunity to win, so that was very good for us.

It was a great experience to play in an environment like that down there at Jordan-Hare. Auburn, they put on a great show. The crowd was live; it was great to play in that atmosphere.”

Ferrell and the Tigers are counting on the win, and their strong defensive performance, to set the tone for the season. Auburn finished with 262 yards of total offense, including just 87 rushing yards on 41 attempts.

Clemson’s defense was once again strong on third down, holding Auburn to 3-of-17 in those situations.

“For us as a whole, it was really big for us, especially as a confidence boost, because definitely coming into the season, before even camp started, we had a very big chip on our shoulders,” Ferrell said. “We know, ‘Yeah, we lost a lot of guys,’ but it’s college football, so it’s next guy up. People come in; people go out, and we want to be those guys that are known as guys who are not afraid of our chances and make the best of our opportunity.

“And we just want to be known as a great defense for this upcoming year.”