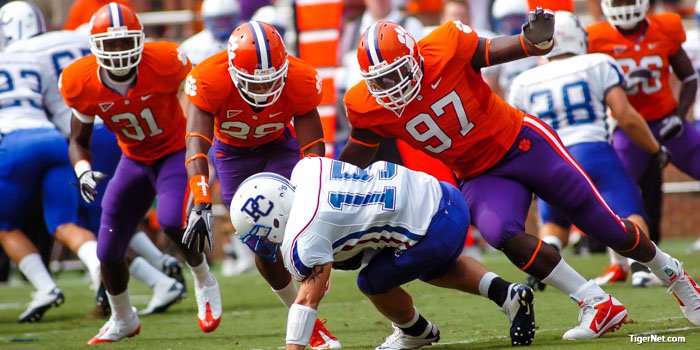 Chrome helmets. Uniform concept designs that include a multitude of color combinations. Alternative uniform designs that are more about money than the fans.

Welcome to college football in the 21st century, when schools want to be so different they wear a different uniform combination each week. But does it help? Clemson fan Chuck Stokes wanted to find out and the results he came back with are remarkable.

But first, let’s talk about Clemson’s uniforms and the classic look that’s been around for decades.

One of the first times the Tigers came out with something alternative occurred on November 18, 1967, when the Tigers hosted the N.C. State Wolfpack in Death Valley. The Pack had risen to a top ranking, and were doing it while wearing unique white shoes. Clemson’s players got together in the days leading up to the game and decided to paint their own shoes orange, unbeknownst to head coach Frank Howard.

The Tigers wore their orange shoes in pregame warm-ups – much to the delight of the crowd – and went on to defeat the Wolfpack 14-6 in Clemson’s first ever win over a top-10 team in Death Valley.

In 1970 Clemson redesigned its look. The Tigers adopted the iconic paw that year and the uniform combinations became a staple - orange jerseys/white pants at home and white on white on the road. However, prior to the 1980 rivalry game against South Carolina, head coach Danny Ford brought out the famous “orange britches” and the Tigers upset the Gamecocks that day. A tradition was born of wearing orange pants for only the biggest of games.Chrome helmets and uniform combinations: Would it really help?

Ken Hatfield tried some disastrous uniform combinations in the early 1990’s, but things soon went back to normal. That changed in 2006 when the Tigers unveiled the all purple look against Georgia Tech. But Dabo Swinney embraces the traditional look, and for the most part the Tigers have gone back to all white on the road and orange jerseys and white pants at home. The helmet has not changed, and to hear Swinney tell it, it won’t change. The exception is when the team breaks out the orange pants for big games or wears purple on Military Appreciation Day.

And I’m all for the tradition. I thought the purple jerseys and orange pants or other sad combinations were hideous. Throw them away for forever.

Swinney has said on more than one occasion that he wants people to turn on the television and be able to tell immediately who is playing. Schools like Alabama, Clemson, Texas and Southern Cal have stayed the course while Oregon and others have gone wild and possess hundreds of combinations.

But that doesn’t’ stop the speculation at Clemson. If you want to generate some buzz on a slow news night, just post the latest helmet or uniform concept. It generates conversation and runs the gamut of “heck no” (from traditionalists like me) to “yes, please” from those that think it would help in recruiting.

That brings us back to Chuck Stokes. Stokes is a 1993 graduate of Easley High School and grew up a huge Clemson fan (he still is). He is also a professor of Sociology at Samford University in Birmingham, Alabama, and I recently received an email from him detailing a study he undertook to ascertain if alternate uniforms made any difference on the field.

He said: “It’s a study on how alternate uniforms impact performance. I was inspired to do it when the images of the Clemson chrome helmet was floating around last spring. I loved the helmet but most Tiger fans seemed to prefer sticking with tradition. Some people suggested that recruits would be attracted to the new style while others said changing uniforms would only prove a distraction. I realized that at least some of the things people were arguing about could be answered with real data.”

Part one of the study was released, and here is Stokes found out, and it was published on www.businessideofsports.com.

Here is an excerpt:

The business strategy of alternate uniforms seems fairly clear. For schools like Oregon and Maryland, who weren’t considered among college football’s blue bloods, alternate uniforms were a way to build their brand in a way that appealed to recruits, attracted eyeballs to televised games, and most importantly for apparel companies, moved product. One team jersey wasn’t enough anymore for the passionate fan; he needed all four possible styles. It sounds like a winning formula, and Oregon’s on-the-field success signaled to the college football world that alternate uniforms with multiple combinations is more than a passing gimmick. Nonetheless, some commentators and fans wondered if Oregon’s success could be replicated. Oregon and Maryland were building their brands around being edgy and different. But if too many other schools imitated their pattern, would it still be cool?

Even a casual college-football observer can’t have missed the proliferation of alternate uniforms. But how widespread is the trend? We examined a sample of SEC and Top 25 teams since Oregon’s 2010 championship-contending season. The results are striking.

The “Oregon effect” is clear. From the tradition-loving SEC to the top teams of the past six years, alternate uniform combinations have caught on. From 2010 to 2014, SEC teams moved from wearing alternates in only 17% of home games to 42%. By 2014, Non-SEC Top 25 teams were wearing alternates for 41% of home games. But, as the graph indicates, a counter trend may be emerging.

The most recent national championship game featured two teams (both Nike schools) that take a very traditional approach to uniforms. Both Alabama and Clemson have bucked the alternate uniform craze. Instead, they pride themselves on uniforms that are consistent with tradition and consistent from week-to-week, both coaches declaring alternate uniforms a “distraction.” They support their approach with on-the-field evidence; the teams are among the five winningest of the last five years (along with FSU, Ohio State, and yes, Oregon). For these schools (and others), tradition is the brand, and apparel companies like Nike and Under Armour capitalize on rather than transform it. Consider this video, released the week following Clemson’s spring game, where the Tigers double-down on their traditional brand by reintroducing uniform elements from their 1981 National Championship season: “The great thing about Clemson,” states a voice over compelling images of star quarterback Deshaun Watson, “you don’t have to start over to achieve greatness. Tradition does it for you.”

Thus, it appears two approaches to college football uniforms have emerged. Building a brand with alternate combinations or branding tradition by highlighting a conventional approach. The emerging “uniform wars” will give news-hungry college-football fans something else to debate about during the summer months. For apparel companies like Nike and Under Armour, either approach can be a winner at the cash register.

In the second part of the study, released last week, Stokes delved into whether the alternate uniforms are more of a help or a distraction, and he led off with Clemson’s famed orange britches.

Ask any serious Clemson fan about the “Orange Britches,” and you’re sure to see a smile, probably followed up with a story of a favorite game in which the Tigers were victorious while wearing their rare all-orange uniforms. Mention the 2008 “Blackout” game around a devout Georgia fan, and you might not want to hang around for the response. Alternate uniforms have long been used as motivation for players and fans. But sometimes, as Georgia demonstrated, it doesn’t work and may even be a distraction.

Clemson, which has its own tradition of motivational alternates, has taken a more conservative approach to uniforms the last few years. In 2012, Coach Dabo Swinney discussed his approach: “I really

about than having guys coming in and saying, ‘Hey what are we wearing?’ I don’t have time for that. Let’s focus on the game.”

So which is it, motivation or distraction? With the College Football Uniform Study, we wanted to find out

if there was any evidence that alternate uniforms actually impact team performance. We looked at the

These trends are based on final-score margins from over 1,200 games, representing every home game for the past six years among teams in our sample, so the differences aren’t a statistical artifact; they’re real. But why?

One possible explanation is hinted at in our previous post. From 2010 to 2015, the use of alternate uniforms more than doubled in the SEC and increased by over 50 percent in the non-SEC top 25. But while high-scoring top-25 powers like Oregon, TCU, and Baylor made alternates their new normal, it was

the SEC’s weaker teams like Kentucky and Vanderbilt that embraced alternates. SEC bluebloods like Alabama resisted the change and opted to build their brand on tradition. So maybe SEC teams appear to

perform more poorly in alternates because it’s the relatively weaker SEC teams that are taking creative risks with uniform combos.

To check the “weaker SEC teams” hypothesis, we looked at performance against the spread. The spread at kickoff is essentially a crowd-sourced prediction of the game and should take into account the relative

So, even when the spread takes into account the relative strength of the teams, SEC teams still do worse

in alternates and non-SEC top-25 teams do better. Moreover, we found that more than half of the points gained or lost against the spread were scored in the first quarter. This suggests that there may indeed be a motivation or distraction taking place. At the beginning of the game, a team may get a boost

from emotion or lose focus because they are overhyped, but after the first quarter, any hype about

uniforms is likely to have worn off. Taking all of our findings together, it appears that SEC teams, playing in the land where football traditions are sacred, are more likely to be distracted by alternate uniforms, but non-SEC top-25 teams are more likely to gain an edge from their edgy uniforms.

To see more and delve further into Stokes’ study, check out this link: http://collegefootballuniformstudy.weebly.com/