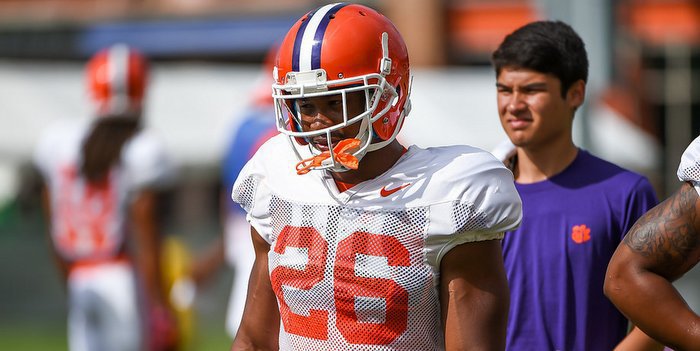 CLEMSON – Adam Choice was the star of Saturday’s scrimmage in Death Valley, but he isn’t ready to say he’s back. He still has work to do.

The game’s top rusher was Choice, who had 10 carries for 169 yards and three touchdowns. His last two rushes were a pair of 65-yard touchdown runs. The native of Thomasville, Ga., has not played since the 2014 season when he suffered a torn ACL at midseason in a game at Boston College. He finished that year with 50 rushes for 218 yards.

Choice said that Saturday’s breakout performance felt good, but he knows there are still things he can work on as the Tigers prepare to take on Auburn in the season opener in three weeks.

“The offensive line really opened up some holes today, and they allowed us to run free,” Choice said of his day. “Regardless of how far I run, as long as I continue to strive to get better and work on what I need to work on, then I will get better. The runs are great - they are good for the confidence - but I know I still have some work to do and I am still pushing to get better.”

Choice made the decision to redshirt last season – the coaches felt like they had he depth to survive while he fully recovered – but watching games from the sidelines went against his competitive nature. His disappointment in not being able to play in the title game against Alabama? The same disappointment he felt not playing any of the games.

“I was like that against Wofford. If you are a competitor you want to play, and knowing there is nothing you can really do and that you have to sit back and watch is hard. Everybody wants to run the ball, and it's hard to just sit and watch,” he said.

“I think today reshuffled it a little bit. Every day the depth chart kind of moves because there are so many guys that are very close,” Scott said. “But right off the bat, it seemed like Adam Choice had a really good day and separated himself a little bit from some of the others. Even though it was a scrimmage, it was just another evaluation opportunity. Every day another guy stands out, and it's truly a situation where those guys behind Wayne have their days and today was a good day for Adam.”

Choice said he doesn’t want to settle for second place, however, and wants to make the players around him better.

“My dad told me that if you aim for the top all of the time then you are going to get better,” he said. “That's my mindset all of the time, that I want the top job and I am pushing myself every day. It won't be easy taking the job from Wayne - he is an excellent back - and regardless if I get the job or not I am going to push myself and with me pushing myself then that will push him. If I push myself to get better then he will get better. It's tough. We are all pushing. We all want the job. We are all putting in extra work and doing what we can. We have some dogs. But that competition will make us all better.”