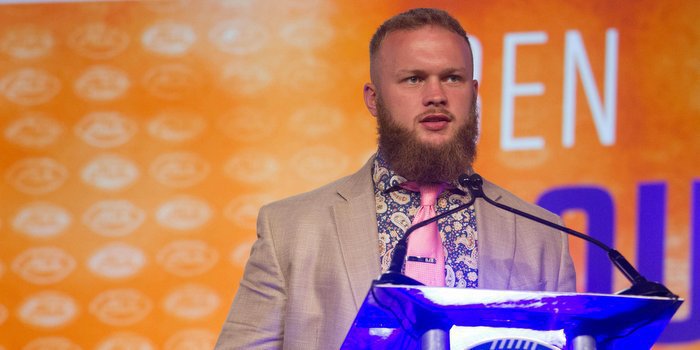 Boulware meets with the media last week in Charlotte

CHARLOTTE, NC – Ben Boulware isn’t afraid to say what he thinks, and it’s just one of the reasons the media loves interviewing the senior out of Anderson’s T.L. Hanna High School. But last Friday’s question and answer session at the ACC Football Kickoff might have been his best yet.

Boulware sat on a podium in front of about 20 media members last week, and he admitted that head coach Dabo Swinney might be a little nervous about what Boulware would say. As it turned out, Boulware was fabulous, and it started with his admitting that he cried following the Tigers’ 45-40 loss to Alabama in the title game in Phoenix in January.

“After the game, I cried. I cried like a little baby. My shoulder was killing me,” Boulware said. “I played with one arm over the last four games and I was ready to take a break. It was a long and emotional season going through everything we went through. I was just mad we lost and disappointed at how we played as a defense. I thought we were the reason we lost that game. The defense played like crap. I was disappointed in how I played and how the defense played.”

Boulware said he didn’t face the reality of the loss, or even think about the game, until after a month had passed. After that month, he didn’t let depression set in. He got angry, and now uses the loss as the motivation needed to not get complacent with last season’s 14 wins.

“I think the fact we lost the game, the national championship, leaves a big enough chip on our shoulder to override any of those other games we won. If we had won the last game we would have been more likely to be complacent this year,” he said. “We would have been 15-0 and had one of the best defenses in college history. But the fact that we lost the biggest game of our college career leaves a big enough chip on our shoulder for this season. We won 14 games but we didn't finish. That's a life lesson about finishing and continuing to work and not getting complacent.”

Over the past few seasons, Swinney has played the disrespect card in an effort to motivate his team. This season, however, the Tigers are picked by many to win the national championship or at the least make the College Football Playoff.

For Boulware, however, expectations and outside influences don’t make an impression on the Clemson locker room.

“Speaking for me personally, I don't care. I don't care if we are ranked 120th or number one. I will prepare for each week and go about my business. We work to the standard and level we are capable of.”

He said he’s ready to forget about last season and instead wants to focus on the task at hand, but one game stands out – the rain-drenched win over Notre Dame in October.

“I wish I could say it was the Alabama game, but we lost and that sucks. But just being a part of all of those big games - Notre Dame and Florida St. and Oklahoma - just playing in all of those big games and being able to contribute and make plays,” Boulware said. “I think that Notre Dame game stands out, because you could probably make a movie out of that entire week. Playing in a hurricane, playing Notre Dame and then the two-point conversion stop. It had been raining the whole game. That whole experience was mind-boggling and I will never forget that. I would much rather not play in a hurricane. I would definitely prefer sunshine. It would be a lot easier.”

On players having to prepare for an increased role

“For me, I only played 80 snaps my freshman year and on special teams. It was a humbling experience. I learned it wasn't all about me. I learned there were a lot of great players out there and I had to put in my time, and once I learned that I was able to take advantage of my opportunity my sophomore year. I got to learn from guys like Stephone Anthony, Spencer Shuey and Grady Jarrett. It helped me out a lot. And being coached by Coach Venables every day. He is a scary individual. He's also very intelligent, he loves the game of football and he loves his players. He knows how to take it down a notch when he needs to and take you aside to talk if you need anything. He did that for me when I was struggling my sophomore year. I didn't know if Clemson was the place I wanted to be. So he kind of took on that father role and gave me that advice I needed. But at Clemson with all the coaches we have here and the seniors we have it's easy to go through the maturation process. Now I've embraced the role.”

On Shaq Smith and Tre Lamar

“I think their future is very bright. I think the football will take care of itself because they are blessed with beautiful football bodies. I think they are so mature and coming in here they knew how hard they had to work and they knew they had to get in the film room. They knew what they had to do in school. They are further along than I was my freshman year. I can't imagine the accolades and awards you will see from them in the next few years.”

“(Tanner) had Jayron and TJ in front of him, so he had to embrace whatever role is handed to him. So he ended up redshirting, putting on a lot of good weight – muscle. I think he’s weighing around 220 right now. Tanner’s a freak athlete. I think as he gets himself to a point where he can learn the defense and make quick decisions, I think that’s when he’ll be able to play. He’s definitely on the road to doing that. I think all of us have more work to do, including him, but this year he’ll have an opportunity to play and when he gets the opportunity, he’ll make the most of it.”