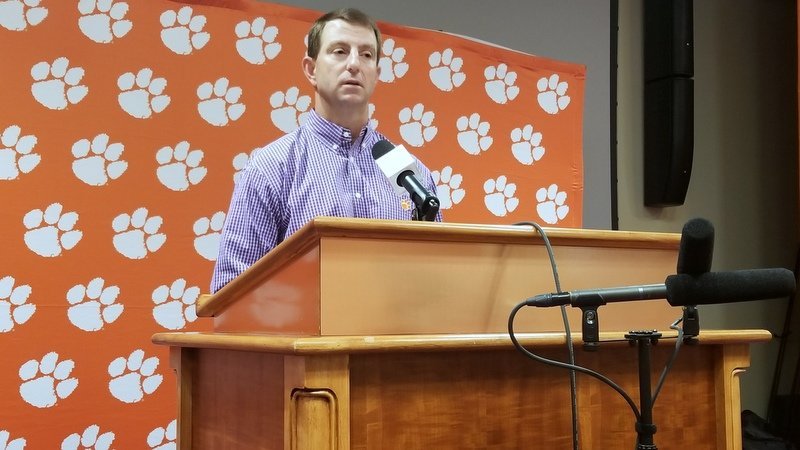 CLEMSON – Members of the Clemson senior class are chasing history Saturday against Duke.

No. 2 Clemson hosts Duke (7-3) Saturday at 7 pm in Death Valley, the final regular season ACC game for the Atlantic Division champions. The Tigers are not only chasing an all-important 11th win but several other records.

Clemson's 2018 senior class is still in the midst of writing a legacy that will leave the group as one of the most decorated classes in school, conference and national history. Last week, the group tied Clemson's 2017 seniors with its 50th win in a four-year span, matching the ACC record set by the 2017 class. The 2018 seniors can stand alone in ACC and Clemson history with their 51st win on Saturday. Clemson would become only the second school ever to produce a 51-win class, joining Alabama, which has produced classes of 53 wins (2014-17) and 51 wins (2013-16 and 2015- 18).

In addition to the group's collective milestones, a number of seniors can make individual history this week as well. With his 53rd career start this week, tackle Mitch Hyatt, who already holds the school mark for career snaps from scrimmage, can break PK Chandler Catanzaro's school record of 52 career starts. Defensive tackle Christian Wilkins is expected to make his 41st career start, which would break Jim Stuckey's school record for starts by a defensive tackle (40 from 1976-79). And wide receiver Hunter Renfrow will seek a reception in his 39th consecutive game played to break Artavis Scott's school record of consecutive games with a reception (38 from 2014-16).

"It's exciting to know we'll finish our (regular) season here in Death Valley. It's going to be a great week. I cannot believe it's already game 11,” head coach Dabo Swinney said Tuesday. “The season has flown by. We've just tried to enjoy every second of it. I love being around our players, our seniors. Who they are as young men, they're just great. Senior Day will be awesome. I know we will have a great crowd who will help us tip our hats to these guys.

"These guys have an opportunity to make history on Senior Day. They have a chance to get their 51st win, which would be an ACC record.”

Swinney then became emotional when trying to describe what the current senior class means to him.

“They've just brought a lot of joy to my life, watching them transform as players and men,” he said. “Austin Bryant, the first time you meet him and Adam Choice, to see them transform into men and to know that they're so well-equipped for what's going to come next, I've just enjoyed all of my time with them. It's special. Everything to me comes back to relationships.

“These are guys I will have relationships with for the rest of our lives. It's sad because you know they have to go. It's going to be my last Thanksgiving with these guys. It's also comforting knowing that they're prepared and that they'll do great in life. They've just brought me a lot of joy. We will honor them individually Saturday, and in the last game they'll come down as a group."

He then said the senior class takes a lot of pride in their accomplishments.

"It all matters. When they were freshmen, there were juniors and seniors around here who were pretty good, too,” Swinney said. “What they did as freshmen matters. What they did as sophomores matters. That's how we maintain that consistency. We create that buy-in and our culture drives that. These freshmen here are competing with that senior class. You can't go back and be a freshman again, but what you do as a freshman will carry over for you. It's pretty cool. This will be like the fourth or fifth class in a row leaving as the winningest class ever. They're competitive that way. They take a lot of pride in that."