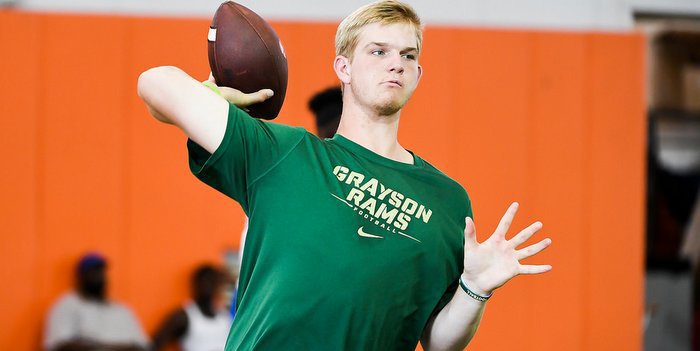 The 4-star 2017 Clemson quarterback commit out of Loganville (GA) Grayson was back on campus for a session of head coach Dabo Swinney’s high school camp, but could only stay for a morning workout. With other headliners like fellow 2017 commits Hunter Johnson and Amari Rodgers and top target Tee Higgins hanging around for all three days, Brice’s appearance went unheralded in the media.

“I could only go for that one session, and I was kind of bummed out because all of the other commits were staying a couple of days,” Brice told TigerNet. “Overall, it was a great time getting back up there and seeing Coach Swinney and Coach (Jeff) Scott and especially Coach (Brandon) Streeter and getting to talk to him more and develop our relationship even stronger. I enjoyed the camp as always, got a lot of good work in and got to talk to Amari and Hunter a good bit. I saw Tee there, and hopefully, we can get him on board. It's like home up there.”

Brice recently competed in the Elite 11 competition in Redondo Beach, California, and just missed the cut for the nation’s top group.

“It feels good to know that you are viewed as one of the top quarterbacks in the country,” he said. “It's a special feeling, and I don't take it lightly. I have a lot of pride in that, and I want to keep it that way. I don't want just to go downhill after being praised for a while. Elite 11 was fun, and I got to see a lot of other great quarterbacks that are my friends.” 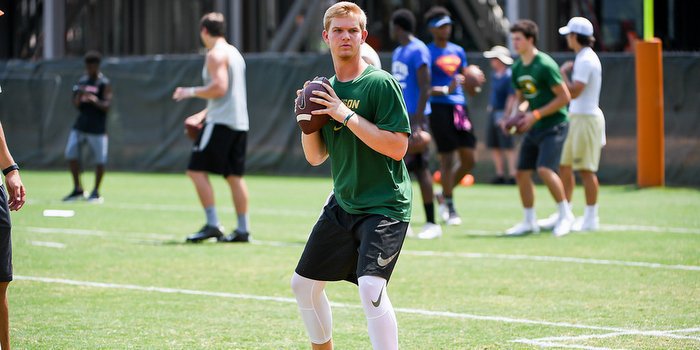 Being selected as one of the nation’s Top 24 signal callers gives him the confidence that he can compete against anyone whether it’s in a game or a battle for playing time.

“I was in the Top 24 in the country that they selected for a reason, and it reassures me that I can hang in there with any of them, the dual-threats or pro styles, it doesn't matter,” he said. “I am not afraid of competition when it comes. You are going to have that everywhere you go.”

Grayson lost head coach Mickey Conn – Conn is also Brice’s uncle – when he took a job as a defensive analyst at Clemson this past spring. Conn was replaced by Jeff Herron, who has won four state championships in the state of Georgia, and the Rams have talent in abundance.

Jamyest Williams, one of the nation’s top 2017 defensive backs, transferred in and joins linebacker Owen Pappoe in headlining a solid defensive unit. Brice will have leading receiver Evan Sturgill back as well as receiver Elijah Shah, and Brice is excited about the possibilities.

“Of course, we have a lot of great assets and the biggest sleeper is Sturgill, my leading receiver last year. Now I have three other guys that can complement him,” Brice said. “I am going to have two or three guys open on every route. It's like a quarterback's dream to have so many options and so many places to go with the ball. I am excited about what is to come this year.”