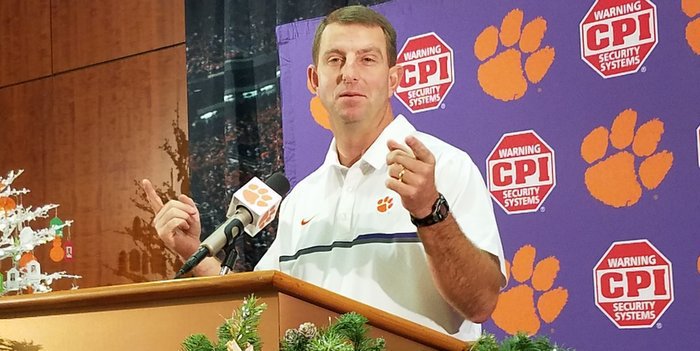 Swinney says he's happy to have another week of game prep

It’s what Clemson works for every year, and this week the Tigers have a chance to claim their second consecutive ACC title when they take on the Virginia Tech Hokies Saturday night at Camping World Stadium in Orlando.

Dabo Swinney met with the media Tuesday afternoon and said that while he loves recruiting, he’s thrilled to have one more week of game prep before hitting the recruiting trail.

“First of all, I’m glad I’m not on the road recruiting today. I’m happy to see y’all because that means we’re in the championship game,” Swinney said Tuesday morning in the WestZone. “I’m excited to have the opportunity to go compete for this league. Also, I’m really proud of our team and our staff for a great season, 11-1 following up a 12-0 season last year. Just can’t tell you how hard that is to do and how proud I am of our team and staff to continually get themselves ready to play at a high level is just awesome to be a part of. I’m really proud of all of them. The credit goes to the players. We’ve got a bunch of good ones.

“It’s a privilege to compete for an ACC Championship. We take a lot of pride in that. It’s what we set out to do. From day one when we got this job, if we can compete in our league, consistently be in the hunt for our league – we’re not going to win it every year – but if we can compete at the highest level in this conference then we’re going to be a nationally relevant football team, and that’s what’s happened over the eight years here. It’s our fourth opportunity to go play for the title, and we know we’ve got an outstanding challenge in Virginia Tech in front of us.”

Swinney said Saturday night would be a chance for two very good football teams to duke it out for the right call themselves champions.

“Two division champs, this is the way a championship game ought to be,” he said. “Two really good football teams that are going to line up and play for the overall championship Saturday night and we’re glad to have that opportunity.”

He hopes the change of venue from Charlotte to Orlando won’t have much of an effect on Clemson’s crowd.

“I don’t know. I’m hoping to have a great crowd. We’re just happy to be in it. We’ll go play wherever. It doesn’t matter. These kids have worked their butts off to get in this game,” Swinney said. “They’ve absolutely earned it and so has Virginia Tech. I don’t have any doubt it will be a great atmosphere. Let me tell you this; Virginia Tech will be excited to play, and Clemson’s going to be excited to play because of both of these teams started 120 days ago in prepping. Everybody was prepping for this moment, and that’s what it’s all about. Everybody else is at home and not practicing, and all of the coaches are on the road recruiting. I look forward to going on the road next week. These two teams will be excited to play regardless.

“I’m hopeful Clemson nation will show up. I don’t have any doubt that they will, and we’ll have a great crowd there to support this team. I hope we don’t take it for granted. I hope that we don’t take winning for granted. I hope that we don’t ever become one of those programs that now all of a sudden ACC Championship Games aren’t a big deal. It’s a big deal. I’m excited for our guys to go have an opportunity to play.”

The Tigers and Hokies last met in the 2011 ACC Championship Game, but Virginia Tech will have a totally different look with new head coach Justin Fuente at the helm.

“Watching these guys, a very impressive football team. It’s going to be weird not having Coach Beamer there,” Swinney said. “We haven’t played them since Coach Beamer retired, but very physical football team, prideful football team, and a team that plays with great effort. They play to the last echo of the whistle every snap, and I have a great respect for that when you turn on the tape and watch the way these guys compete. Really impressed with what I’ve seen.”

“It all goes through No. 4 (Jerod Evans) offensively, their quarterback. He’s a very good football player. Big. Strong. Physical guy,” Swinney said. “They’re a spread, power team with great tempo. They want to play really, really fast. That means the quarterback has to be a great decision maker for them. They’re going to do all of the zone read stuff, the play action and run pass option stuff that comes off of that, he does an excellent job. They have a great system, and they understand what they’re doing. They’ve got excellent skill around their quarterback. They have a good tight end and excellent guys on the outside. They’ve got a 6-7 guy out there that they throw the ball up to and he’s made plays on everybody. No. 1 is a heck of a receiver. No. 5 is their jet sweep guy. It’s a good football team. The offensive line – tough, physical, built to run the ball. Very impressed with them.”

“Defensively, Bud Foster has been there forever – 22 years as the coordinator. He’s forgotten more football than I’ll probably ever know. He’s a great football coach and does an unbelievable job,” Swinney said. “I’ve got a ton of respect for the job he does because to stay somewhere that long and to have that type of success and to see how his team plays. Those guys take on his personality. They play with tremendous effort, toughness. They’re a disciplined group. They understand the nuances of his defense and present a lot of different things from a coverage standpoint. They’ll show you a lot of different looks and then they’ll bring pressure and challenge you and play cover zero. They do a great job up front. No. 4 is an outstanding defensive end. He’s got about six or seven sacks.

“A lot of movement. Very seldom do they just line up play. There’s always somebody slanting or twisting or looping. There’s movement on almost every snap. They understand what they’re doing and where they’re supposed to be. Their backers are impressive. They’re big inside. Their middle backer plays about every snap. I don’t think he ever comes off the field and he’s an outstanding player. No. 49 – their outside backer – is also a great player. No. 6 their nickel. They got all of their guys back in the secondary which has paid dividends for them this year because all of those guys really understand what they’re doing. They’ve done a really nice job creating turnovers and creating problems for some the teams they’ve played.”

“Kelly Bryant will be the guy for sure going into the spring.”

“Yesterday, we had 18 guys honored on the All-ACC. I’m really happy for those guys, especially guys like Jadar Johnson who’s a guy that’s gotten better and better and he comes back, and now he’s all-conference. We had three all-conference offensive linemen for the first time in the history of the school. It’s just awesome to see those guys be honored that way. Then, Coach V (Brent Venables) has been named a Broyles finalist again. He’s kind of on that list every single year. He’s definitely deserving to win it, without a doubt, especially with the job he’s done with our defense. Just proud of all of those guys.”

Biggest challenge of the season

“Scott Pagano is probably a little ahead of schedule. He’s really doing well. He wants to play this week. I don’t know that it’s realistic. He probably could play, but I don’t know if he could play winning football like we need, but he’s working really hard toward that. Same thing with Richard Yeargin. He’s going to be close, but I don’t know if he’ll quite make it by the weekend. Both of those guys will be ready to go once we get into our bowl prep. John Simpson looks good. He’s got a chance for this weekend. Adrian Baker is not going to play. He’s practicing, but he’s not a position with where we are now in the season to compete. He’s much better and more confident, but he’s not in a position to go compete for playing time. Then Jake Fruhmorgen, I don’t have any update at this point.”

On the reporting of racial slurs being used by Clemson players

"It is what it is. It’s a shame that the diversion took away from what happened on the field. It’s disappointing. I give young people some grace. Young people will say some things from time to time and are emotional, so I don’t have a problem giving young people some grace. The only problem I have is with some of the media people. I don’t give them much grace. They don't give me any either. I’m not necessarily talking about the people in this room. It’s like there’s no credibility anymore. You don’t need to confirm anything anymore. You just write it. Somebody said what? Headlines, they don’t care. Shoot first, ask questions later. That’s the mentality we have now in the media. It’s a shame. It really is a shame because you’re attacking people’s character.

"There won’t be a retraction. There won’t be an apology. You just attack someone’s character any time you want if you have the power of the pen or the blog. It used not to be that way. You had relationships, and people would ask you. Now, it’s like I was in the bathroom and the guy was in the third stall was on the phone and said this and that’s what I heard, and that’s headlines because that’s what sales. That’s disappointing. There’s zero accountability. You let me say something. None. No accountability whatsoever. Instead of the headlines being 23-1 in the last two years or these seniors just won their 46th game or the largest margin of victory ever for an ACC versus an SEC opponent or we’ve only had six 11-win seasons at Clemson, and we’ve had four in the last five years. Instead of those being the headlines and one of the most dominant performances ever, the headline is what somebody said, give me a break. I can give grace to the young people. It’s not about that.

"I give total grace to that, but for the adults who will take anything and go and write it and spin it and headline it the way they want it to get people to click on it, shame on them. But, that’s the world we live in, and that’s sad, with zero accountability. A lot of those people should be fired. They should be fired. They should be, but there’s zero accountability. The people with the microphone just say what they want to say. It doesn’t matter how they attack people’s character or how they attack whatever. They don’t say that."