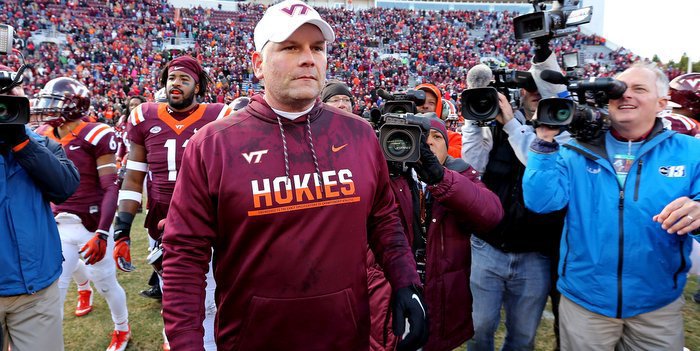 Fuente has Virginia Tech playing for the ACC title in his first season (Photo by Peter Casey, USAT)

Fresh off a desultory loss to South Florida in the Belk Bowl that ended the 2010 season, Clemson head coach Dabo Swinney wanted to change his offensive philosophy and make the kind of program-changing hire that would set his program up for long-term greatness.

Swinney wound up making the offer to Morris and that hire led to the Tigers’ current run of 10-win seasons. Morris took the job at SMU two years ago and is now in the running for the opening at Baylor, while Fuente parlayed three successful seasons at Memphis into the head coaching job at Virginia Tech.

The move to Morris worked out for all three parties involved, and Swinney and Fuente will square off for the first time at Orlando’s Camping World Stadium this week in the ACC Championship Game, with No. 3 Clemson (11-1, 7-1 ACC) trying to get into the College Football Playoff for a second straight year with a win against No. 19 Virginia Tech (9-3, 6-2), which is playing in the game for the first time since 2011.

Fuente told TigerNet Sunday evening that he and Swinney have kept in touch over the years.

“Well, my wife and I came down and spent -- I can't remember, it was a day and a half. I know we spent the night down there, and really enjoyed Coach Swinney and his wife's company,” Fuente said. “I was very impressed with him and just his personality. Obviously I didn't really know him, but really enjoyed the conversation.

“I think through the years, we've continued to stay in touch, whether via text message or the occasional phone call, and I've enjoyed our relationship ever since.”

“I did not know him prior to kind of zeroing in on him as a candidate that I wanted to talk to about our offensive coordinator job here back in 2011,” Swinney said. “I really had kind of done my homework and research and kind of independently, and then confirmed it with some people that I trusted, and I kind of got it down to three guys, and Chad Morris and Justin were the top two that I wanted to actually bring in and meet with and then kind of go from there.

“I just had a lot of respect for the job he had done and watched him closely. I believe they were in the Rose Bowl that year, if I remember correctly. But just I thought he had done a great job with the development of their quarterback, and I think it was Andy Dalton, and then we had played them, as well. We had played them the year before here at Clemson in a really tough, hard-fought game. That was really it, and obviously the success. But really just a great guy. Enjoyed meeting him and his wife.”

Fuente said he doesn’t think about what might have been with players like Nuk Hopkins, Sammy Watkins and Tajh Boyd.

“No, not really. I mean, that whole time happened when I was at TCU, and I can't remember exactly how the years played out,” Fuente said. “But I was either at TCU for another year or two after that. I think one more year before taking the head job at Memphis. That doesn't mean that I didn't watch or cheer them on or watch them play, but I never really looked back at what could have or should have been.”

Swinney says the two have kept in touch.

“After that, obviously we ended up hiring Chad, but he and I became friends, kept in touch, and the next year he got the Memphis job, and we just kind of stayed in touch in that regard,” he said. “I would shoot him just an encouragement text from time to time or he might send me one and then we talked a little bit about some recruiting. I had a couple players that had an opportunity that we had recruited here and for whatever reason was looking for another place to go, so I reached out to him a couple different times on a couple different players that had opportunities to go and play for him.

“Again, good, healthy relationship, and then got a chance obviously to spend some face time with him once he got into this league and we had some of our spring meetings and stuff. But just a great guy, heck of a football coach, and he's going to do a fantastic job at Virginia Tech.”