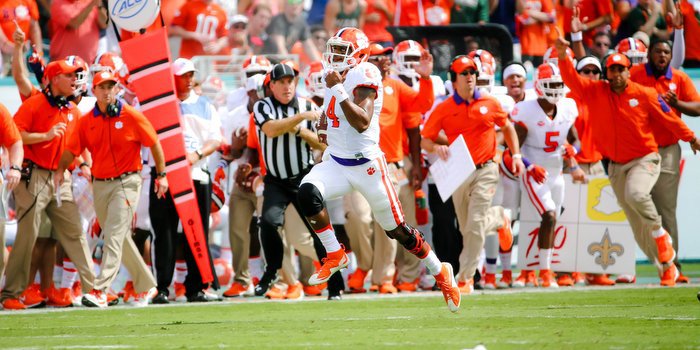 Watson had a career-long 63-yard run in the first quarter (Photo by Steve Mitchell, USAT)

MIAMI GARDENS, FL – A pregame shouting matchup in the endzone was about all the fight Miami could muster against Clemson Saturday as the sixth-ranked Tigers rolled to a 58-0 throttling of the Hurricanes at Sun Life Stadium in front of an announced crowd of 45,211.

Clemson improved to 7-0 on the season, 4-0 in the ACC while Miami fell to 4-3 overall, 1-2 in the ACC, leaving head coach Al Golden’s job in jeopardy.

The Tigers marched to a 42-0 halftime lead, including 21 points in each of the first two quarters, as Miami showed little life after an early interception thwarted a chance to tie the game. Deshaun Watson finished the day 15-of-19 for 143 yards and one touchdown, while he added eight rushes for 98 yards and a score. Wayne Gallman carried the ball 22 times for 118 yards and a touchdown.

The Tigers took the opening kickoff and scored without much of a problem, moving 82 yards in eight plays. Clemson went with Wayne Gallman early, but facing a first down at the Miami 34 the Tigers went with a little trickery. Watson took the snap while members of the offensive line and Jordan Leggett remained in a stance. Watson rolled right, then tossed a throwback to Leggett who rumbled 34 yards for the score and a 7-0 lead.

Miami marched down the field and into Clemson territory, but the Tigers earned the game’s first turnover with the Canes facing a third down at the Clemson 19. The Canes attempted to throw a wheel route to running back Joe Yearby, but Kaaya underthrew the route and Jadar Johnson intercepted the pass.

Three plays later, Watson ran the read option to perfection to set up Clemson’s second score. Watson read the defensive end and pulled the football and raced 63 yards to the Miami eight. Two plays later it was Gallman who got the score, bulling his way to a five-yard score for a 14-0 lead with 6:53 remaining in the quarter.

The Tigers forced a Hurricane punt, and again it didn’t take long for them to find the endzone. A wobbly punt gave the Tigers good field position, and it took just six plays for Clemson to march the 61 yards for the score as Zac Brooks rumbled in from the one with a 21-0 lead late in the first quarter.

The Tigers forced another punt, but the drive was costly to the Hurricanes. Clemson defensive end Shaq Lawson used a spin move and then split the guard and tackle to sack Kaaya, who later failed a concussion test and had to miss the rest of the game. The Canes punted and pinned Clemson deep – at their own 15 yard line – and Clemson marched the 85 yards in 15 plays. The drive ended with an Artavis Scott four-yard touchdown run as Clemson led 28-0 midway through the second quarter.

Another Miami drive ended with a punt that forced Clemson to start deep in its own territory – this time at the 16 – and the Tigers used exactly 13 plays to take it the distance. Watson ended the drive with a six-yard gallop through the middle untouched as Clemson led 35-0 with 4:05 to play in the half.

With Kaaya out, Miami turned to backup Malik Rosier, who promptly threw a pick-six that Cordrea Tankersley returned 36 yards for the touchdown as Clemson led 42-0 at intermission. It was the most points scored in a half for the Tigers since they scored 49 in an 82-24 win over Wake Forest in the national championship season.

Clemson added a 30-yard field goal early in the third quarter for a 45-0 lead, and the Tigers began to substitute liberally, the statement made for the nation to see.

The teams exchanged a few punts, but Kelly Bryant put an exclamation point on the statement with a 59-yard rush early in the fourth quarter. The extra point was missed and Clemson led 51-0.

Van Smith intercepted a wobbly Rosier pass on the ensuing possession – he played it like a center fielder – and returned to the Miami 18 yard line. Four plays later Bryant again did the honors, taking it in from 10 yards out for the touchdown and a 58-0 lead with 8:50 still to play.